Tongdosa is the largest temple in Korea and is considered as one of the Three Jewel Temples of Korea. The temple is famous for its lack of statues and is often called ‘the temple without a Buddha’. Instead the courtyards in the temple are structured around several pagodas and a Buddhist altar. The legend holds that an eternal flame was supposed to have been kept for over 1,300 years. 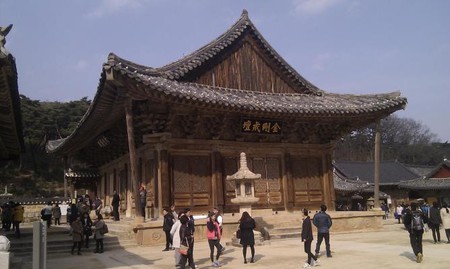 Of South Korea’s three ‘jewel’ temples, Tongdosa is the easiest to access. Located just a few kilometers north of Busan’s Nopo bus terminal, it is an easy half-day trip for anyone in the city, or even in the province of Gyeongsangnam-do. Its real attraction lies in its history and aesthetic layout, as well as the charm of its buildings. We explore the history and the beauty of the Tongdosa temple. 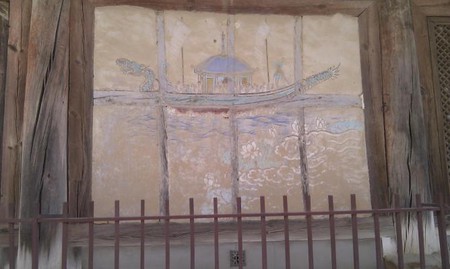 The Goryeo Dynasty of 935 – 1392 was the only one in which Buddhism was the state religion. As a result temple construction and art creation burgeoned. At the same time, though, there was also corruption of the Buddhist clergy, which enjoyed great prestige and wealth. Opposition to Buddhist excesses by the Neo-Confucian faction eventually led to the overthrow of the Goryeo in 1392. The Joseon Dynasty was subsequently established, which severely restricted Buddhist temple construction and worship, and discouraged upper class youths from becoming monks or nuns. A consequence of this was that the religion grew closer to the peasants and its art took on folk characteristics in contrast to the sobriety of Goryeo art. Thus, the functions of temples shifted to address common people’s needs.

It was during the Joseon period that the three jewel temples of Tongdosa, Haeinsa and Songgwangsa took the form they are in today. Since Tongdosa and Haeinsa were both inside the Pusan Perimeter in 1950, and Songgwangsa was away from the action in the southwest, all three survived the Korean War and were restored in the 1970s. 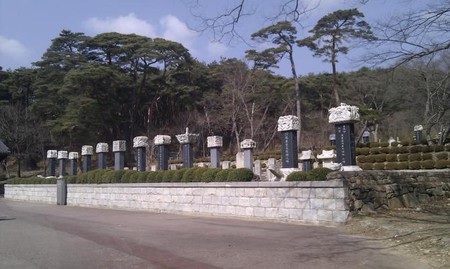 Tongdosa is the most important of the three jewels since it reportedly houses some actual remains of Sakyamuni, the historical Buddha. Therefore, it is said to represent Buddha himself. Founded by the great monk Jajang in 646, it was originally built to house his collection of Sakyamuni relics that he had acquired on his travels. He put the most important relics in a special budo, or reliquary stupa, on a platform he named Geumgang Gyedan, which can be seen today. Jajang commanded that all Buddhist monks be ordained before itt 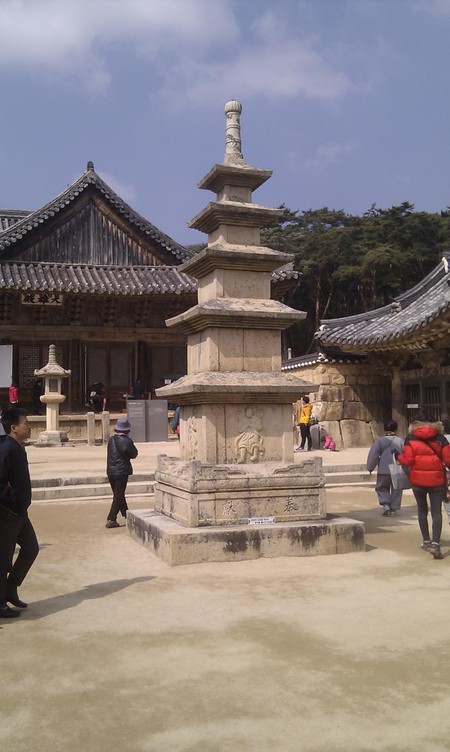 The temple flourished throughout the subsequent centuries until the Japanese invasion of 1592 – 1598. Like most Korean temples at this time, Tongdosa was ransacked. Its main hall, however, miraculously survived and can still be seen. The rest of the temple was rebuilt in the early 17th century and is now the country’s largest monastic complex, with around 500 monks and nuns and 18 hermitages on its extensive property. 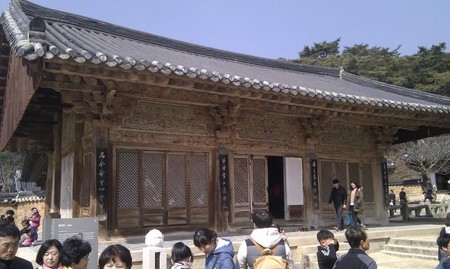 What attracts people to Tongdosa is the scenery and the layout of the charmingly rundown buildings. Uniquely among all Buddhist temples in Korea, a sandy trail about a kilometer long leads up to the temple front from the entrance gate; woods on the right and a beautiful stream on the left surround it. As you get closer to the temple, more and more steles and other stone monuments of distinguished deceased monks appear among the trees. Finally, the modern Tongdosa museum appears on the right, while across the stream one can see several historic stone bridges. The museum is two stories and houses both ancient and modern Buddhist paintings, which can be viewed for free. Visitors must remove their shoes and put on special slippers to enter.

As you continue through the gate of the Four Heavenly Kings into the temple proper, you will notice the old halls that contain stupas, housing relics of Sakyamuni – or so goes the legend. Since most of the buildings date from the early 17th century and have not recently been painted, they have a weather-beaten appearance that creates Tongdosa’s trademark quaintness. Pilgrims and worshipers can also be found in all of Tongdosa’s halls, particularly on weekends. The non-Buddhist visitor will find their presence adds to the sanctity of the atmosphere, making it less touristy.

Overall, if you only have time to visit one jewel temple in Korea, Tongdosa is a must-visit. Once you walk down the wooded trail beside the rushing stream and into the spiritual realm of the buildings, you will never forget it.