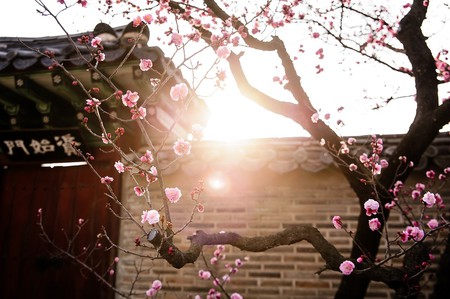 As the winter frost begins to melt and temperatures slowly start to rise, South Korea comes to life, its lands drenched in colorful blossoms and its air sweetened with the fragrance of spring. To enjoy the country in all its splendor during this time of renewal and growth, head to the country’s most enchanting springtime destinations, as listed below.

Renowned for its unspoiled natural beauty and slow pace of life, southern Cheongsando Island in Jeollanam Province is seemingly straight out of a storybook. A favorite springtime destination among Koreans, the small island hosts an annual Slow Walking Festival every April in which participants are encouraged to walk along the island as slow as possible to best enjoy the stunning scenery: terraced rice paddies, panoramic sea views, and endless fields of yellow canola blossoms. 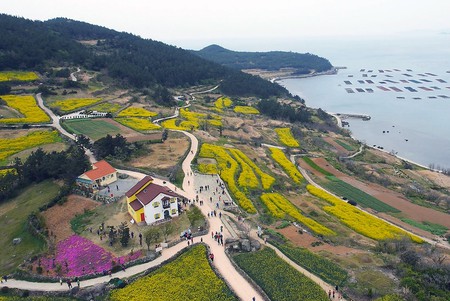 Kids and kids at heart love Everland – Korea’s largest theme park – for its ecological safari world, resident pandas, fireworks displays, and its T-Express, the country’s first wooden roller coaster. Yet nothing quite compares to the park’s Tulip Festival, which is held every year to mark the beginning of spring. Here, vast tulip and rose gardens spring to life, while azaleas, forsythias, camellias, and freesias saturate the grounds with vibrant colors. Guests can also enjoy a number of events such as spring-themed parades and entertaining performances throughout the festival. 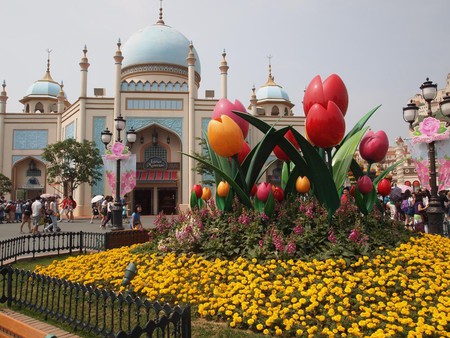 In the quaint province of Jeollanam, where the Seomjin River flows around the periphery of Jirisan Mountain, is a tiny village that, once a year, becomes blanketed in plum blossoms. Mostly white in color, the flowers transform Gwangyang Maehwa Village into what looks like a snow-covered winter wonderland.

To celebrate the splendor of the blooms, the village holds the Gwangyang Maehwa Festival in March, attracting some 500,000 tourists every year. Here, visitors can not only enjoy the spring scenery, but also participate in a variety of activities such as picking maesil (plum) and making maesil gangjeong (sweet plum puffs). 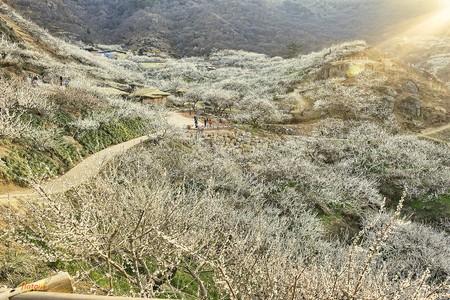 Despite being a bustling metropolis, Seoul also has its fair share of cherry blossom viewing sites, and Yeouido, an island situated on the Han River, is the most accessible (and most visited) of the bunch. The focus of the Yeouido Spring Flower Festival in April is, of course, the cherry blossom trees, of which there are more than 1,800 in full bloom. Street performances, food vendors selling cherry blossom-themed snacks, and countless art exhibits make the festival a great place to enjoy the great outdoors and defrost after a long, cold winter. 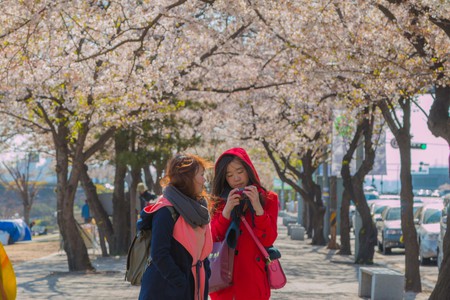 Every April, some 360,000 cherry trees begin to blossom in the small military port of Jinhae near the southern coast of Korea, turning the city into a spring dream. Although the entirety of Jinhae is considered to be a top cherry blossom destination, the most popular viewing areas are Anmingogae Hill, Jehwangsan Park, and Yeojwacheon Stream, which, canopied in white petals, becomes a floral tunnel.

The annual Jinhae Gunhangje Festival provides a great opportunity to see the flowers during their peak bloom, as well as a chance to tour a replica of one of Admiral Lee Sun-Shin’s famous turtle ships, a Korean warship that was used by the Royal Korean Navy from as early as the fifteenth century. 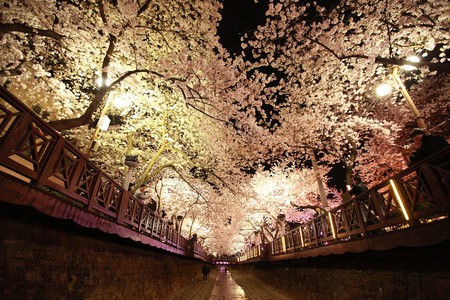 Thanks to its large colony of sansuyu (Korean dogwood) trees, Icheon has in recent years become a popular spring destination. These wild trees, many over a century old, boast bright yellow blossoms and are abundant throughout the city, but especially so in the tranquil area of Baeksa-myeon, which is also known as Sansuyu Village. Here, the Icheon Baeksa Sansuyu Flower Festival is held every spring, and is attended by photographers looking to get the perfect shot, as well as tourists seeking to soak up Korea’s natural beauty.

As South Korea’s southernmost province, Jeju Island is usually the first to witness the arrival of spring, drawing in many tourists eager to say goodbye to winter. Seopjikoji, an area located on the eastern shore of Jeju, is perhaps one of the most popular parts of the island to enjoy the blossoming of its gorgeous canola flowers. Blanketed in yellow, the coastal region is a popular filming location for Korean dramas and movies and makes for an easy trip from the nearby Jeju Folk Village and Udo Island. 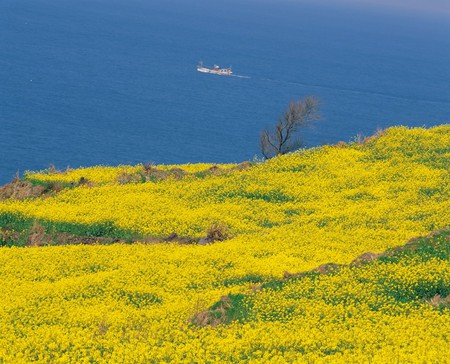 Once a residential palace for queens and concubines of the Joseon dynasty, Changgyeonggung Palace is an ideal place to explore the history of Korea and get an up-close look at the country’s traditional architecture. Furthermore, it’s also one of the best spots in Seoul to enjoy the spring blooms. 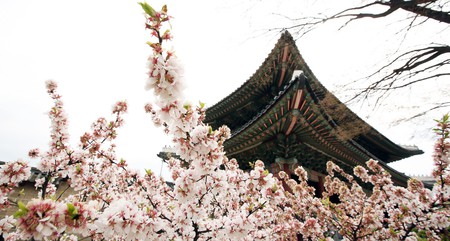 Royal cherry blossoms in Seoul | © KoreaNet / Flickr
Give us feedback