The Best Slopes Near Seoul for Winter Sports 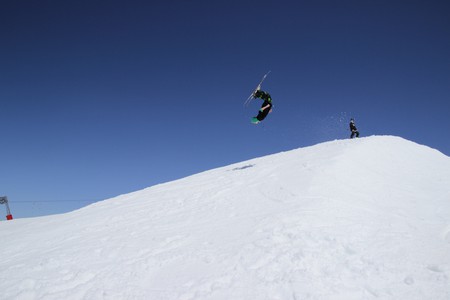 As the host of the upcoming 2018 Olympic Winter Games in Pyeongchang, South Korea is a great destination for winter sports, now more so than ever. Furthermore, a number of the country’s best ski resorts are conveniently located just a short bus ride from Seoul, making Korea’s small but well-maintained slopes incredibly accessible. The following are our picks for the best resorts near the country’s capital.

Selected as a venue for the 2018 Winter Olympic Games, Phoenix Park is located in the heart of Pyeongchang, Korea’s major winter sports center. The resort features a total of seventeen slopes – a number of which are approved by the FIS (International Ski Federation) – and is known for its outstanding snow quality. Phoenix Snow Park also prides itself on being an environmentally friendly resort, and makes a conscious effort to minimize its footprint on the surrounding nature. The shuttle bus that departs from Samseong and Jamsil Sports Complex Stations takes approximately two hours to reach the resort.

Although Jisan is perhaps best known for its summer rock festival that has in the past seen headliners such as Oasis, Massive Attack, and Arctic Monkeys, it is also home to the Jisan Forest Ski Resort. Equipped with everything one might expect from a Korean ski resort, Jisan Forest boasts eight beginner-intermediate level slopes that twist and turn throughout its beautiful white pine forests. Situated a quick 40-minute drive from Gangnam, the resort makes for the perfect day trip from Seoul.

The International Ski Federation-approved Bears Town Resort is a large leisure complex that lies on the outskirts of Seoul, about an hour’s drive from the city. The resort caters to all levels, offering one slope exclusively for expert skiers, two for advanced skiers, two for intermediate-advanced skiers, and three for beginners. All slopes are also open to snowboarders, and can be accessed via one of the park’s eight lifts. The resort is particularly popular with families, thanks to its 400-meter-long sledding hill.

In recent years, Vivaldi Park Ski World has become a favorite drop-in skiing destination among Seoulites and is also the most popular resort with snowboarders. In addition to its 13 slopes, Vivaldi offers indoor screen golf, bowling, billiard, and karaoke facilities to keep the entire family entertained. Vivaldi Park is about an hour and a half from Seoul and can be reached by a shuttle bus that departs regularly from Jamsil Sports Complex Station.

Konjiam Resort is both the largest ski resort in the Seoul vicinity and the first in Korea to limit the number of skiers to 7,000 per day. With nine slopes of varying levels, five super-speed ski lifts, and superior facilities that rival the resorts of the outlying provinces, Konjiam is a great pick for even the pickiest of winter sports enthusiasts. Furthermore, the resort guarantees a waiting time of 15 minutes or less, meaning you get maximized slope time.