The 10 Korean Contemporary Artists You Should Know 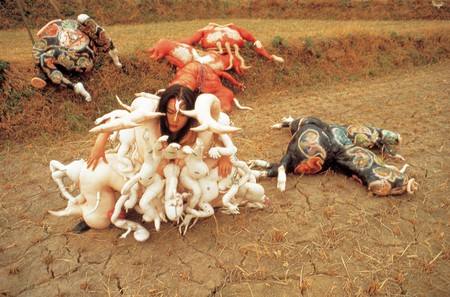 One of the most rapidly modernised countries in the world, South Korea in Asia is also at the forefront of contemporary art. A fusion of influences such as ancient Buddhist and Confucian artworks, as well as popular culture and modern social issues, South Korean art continues to flourish and impress. From hyper-realistic sculptures to threaded installations, here’s our guide to the top Korean contemporary artists.

Active since the 1980s, Lee Bul is a sculptor and installation artist who represented Korea at the Venice Biennale in 1999. Her work is questioning and probes themes of authority, politics and society. She studied sculpture at Hongik University, and produces works that are mechanical and draw the viewer in. Famous pieces include I Need You (Monument) from 1996 which consists of a large inflated sculpture which features a photograph of Lee on the front. A series of pedals located at the bottom allow the viewer to inflate the object, linking the title and creation of the work. Other notable works include her cyborg sculpture series, which was made between 1997 and 2011. Using these cyborgs, Lee explores our fears and fascinations with the uncanny. Her work has been exhibited worldwide, in galleries such as the New Museum of Contemporary Art in New York, and The Power Plant in Toronto and she has a major retrospective opening at London’s Hayward Gallery this summer. Her work has received critical acclaim, and she was chosen as a finalist for the 1998 Hugo Boss Prize by the Guggenheim Museum in New York. An installation piece by Lee Bul entitled A Fragmentary Anatomy of Every Setting Sun is on permanent display in the Hara Museum ARC since 2010.

A notable sculptor and installation artist, Do Ho Suh is best known for his complex structures and media works. These include his translucent nylon Staircase III, which was exhibited in the Tate Modern, and his gold and chrome plated nylon fishing net entitled Net-Work. Graduating from Seoul National University with a BFA and MFA in Oriental Painting, Do-Ho Suh relocated to America, where he continued his studies at the Rhode Island School of Design and Yale University. He currently lives and works in New York and his home town of Seoul, commuting regularly between the two cities. As a result, the theme of migration is often prevalent in his works. His pieces also analyse the idea of site-specificity and scale, and how we as viewers occupy space. His artworks have also been on display in the Storefront for Art and Architecture, the Serpentine Gallery and the Seattle Art Museum. 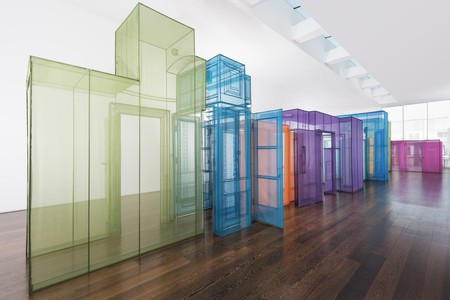 Born in Seoul, Xooang Choi is a sculptor of surreal and breath-taking hyper-realistic works. His early oeuvre consists of miniature figures, but these grew in size during the late 2000s. Choi’s works are not just sculptures, but are strange and beautifully nightmarish creatures, which reflect social themes and reveal facets of human psychology. He aims to evoke sympathy and understanding from his viewers, and in doing so, creates highly affective works. Famous pieces include The Noise and Sheddings. The Noise comprises of more than 70 heads, each bearing a different facial expression, forming a ring around the viewer. Sheddings consists of debris and body pieces, which draws the viewer in, as they try to make sense of the piece, and put it back together in their minds. Questions about the fragility and frailty of the human body arise. These works are created with oil on resin on steel, to create a eerily life-like quality. Choi has exhibited in both solo and group shows worldwide, including the Gwangju Biennale in 2014. 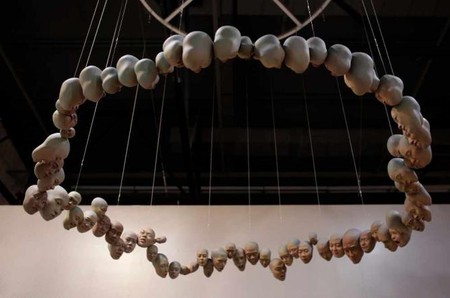 Originally studying journalism in Korea, Jung Lee moved to London where she graduated from the Royal College of Art with an MFA. Her art practice consists of photographic works of neon signs, which are often located in isolated areas, removing the signs from their contexts and meanings. As a Korean in London, Jung Lee learned English as a foreign language, which forms the basis of her work, as she unpacks the idea of language, and what happens words when their meanings are challenged. Lee is influenced by a number of artists such as John Baldessari and Sophie Calle. Her work has been exhibited at the One and J. Gallery in Seoul, the Museum of Fine Arts in Houston and at the Frieze Art Fair in London.

Receiving her MFA in painting from the College of Fine Arts at Sungshin University in 1990, Jeongmoon Choi moved to Germany in the mid-1990s, and has been based in Berlin ever since. Her work has been on display in the Moeller Fine Art in Berlin and at the Karst Project in Plymouth. Her oeuvre consists of intriguing and immersive installations of light and threads that occupy the viewer’s space. Observers are allowed to roam around the matrix of works, captivated by the play between line and light. Pushing the boundaries of drawing and installation, Jeongmoon’s works are also architectural and sculptural, and reveal how art can transverse various categorisations. Upcoming exhibitions include the Galeria Laurent Mueller in Paris and the Curitiba International Biennial and The Oscar Niemeyer Museum, Curitiba in Brazil. 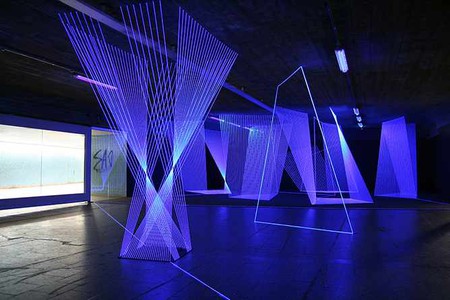 Born in Seoul but residing in America, Il Lee is renowned for his impressive ballpoint pen drawings, oil paintings and prints. His works investigate the idea of materiality and the process of art making. His ballpoint pen works draw the viewer in due to their abstract nature and intricate design. His works have been exhibited at The Metropolitan Museum of Art in New York, Leeum Samsung Museum of Art in Seoul and the San Jose Museum of Art. Il Lee’s early works consisted of geometric works that showed an influence of abstraction, but his style changed in the 1980s when he adopted ballpoint pens as his medium of choice. Gesture and motion are at the forefront of his works, with Il Lee’s swirling strokes clearly visible. His works vary in size, but are often on the large side, and can often envelope an entire wall. The titles of Il Lee’s pieces are also intriguing, as they have no descriptive elements, and are comprised of numbers and letters.

Working on a minute scale, Ham Jin is famous for his tiny microscopic sculptures of intricate detail. Graduating from Kyungwon University, Ham Jin creates a miniature world full of fantasy and imagination. His petite works are made mainly from black polymer clay, and his more recent pieces portray themes of the macabre and surreal. Ham Jin is interested in the hidden truths of society, and these are reflected in his works, with his tiny sculptures revealing what is regularly overlooked and unseen. Often no bigger than a fingernail, the level of detail in Ham Jin’s works is astonishing. He has exhibited at the Gwangju Biennale in 2002, the Venice Biennale in 2005, the Busan Biennale in 2014 and the PKM Gallery in Seoul in 2003 and more recently in 2011. His style is constantly developing, and more contemporary pieces often include other mundane objects such as dead insects, creating small dioramas of everyday life. 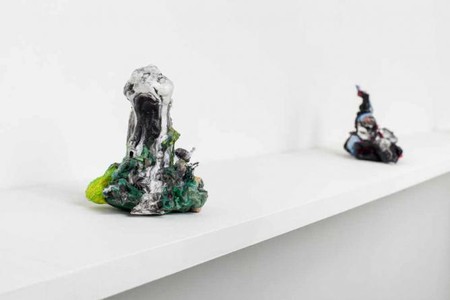 A video and installation artist, Je Baak’s practice is influenced by Zen Buddhism. His resulting multimedia works attempt to give viewers a sense of enlightenment and viewing the everyday in a new way. The object of attention is constantly transformed in his pieces, removing its familiar meaning, and causing the viewer to create new ones. Notable works include His Silence from 2010 which is a loop of authoritative figures such as Barack Obama, with Je Baak removing sections of their speeches so they no longer make sense, and in turn evoke contemplation. Another key work is The Structure from 2010, which consists of amusement park rides dotted across various LCD screens. Through their display, Je Baak creates a tension between pleasure and pain, fear and excitement. His work has been exhibited at Hada Contemporary in London and Art Club 1563 in Seoul.

Utilising her small studio, JeeYoung Lee creates endless worlds and universes that extend beyond the confines of her walls. Active since 2007, JeeYoung Lee photographs these surreal environments, which act as theatrical backdrops to her imagination. Her resulting photographs are extremely detailed and never photoshopped, revealing her quest for perfection, and to make imagined worlds a reality. The artist features in these photographs, but never facing the viewer. These unusual self-portraits also create a tension within her worlds, and cause the viewer to be even more intrigued by her fantasy worlds. Themes of identity and society are revealed through her works. Her photographs often garner immediate attention, with some works being viewed more than 500000 times on Reddit in 2 days. JeeYoung Lee is the recipient of a number of awards, such as the Sovereign Art Prize in 2012. Her work has also been exhibited worldwide, in galleries such as the OPIOM Gallery in 2014 and Gallery Nine 5 this year. 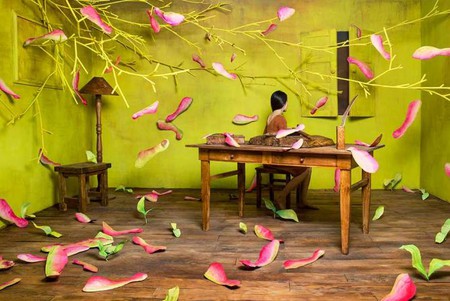 Obtaining a BFA and MFA in sculpture in Seoul before studying Integrated Media at the California Institute of the Arts, Hong Sung Chul creates visual works that blur the boundaries of photography, print and sculpture. Comprising of elastic strings on which an image is printed, his works are often bodily in their subject matter. Famous works include his String Mirror series, in which hands and other anonymous body parts reach out towards the viewer. The strings are often strung with varying degrees of separation, adding a sense of depth to her works. By using an intricate interplay of technologies and media, Hong Sung Chul probes modern ideas of communication and a desire for human contact. His choice of strings to portray the human body also plays on the connotations associated with the medium, as elastic is both flexible and rigid, much like the body itself. It also suggests the feelings of release and anxiety. His works have been displayed in galleries around the world, such as Hada Contemporary in London, Galerie Orem in Paris and Youngeun Museum of Contemporary Art in Kwangju.