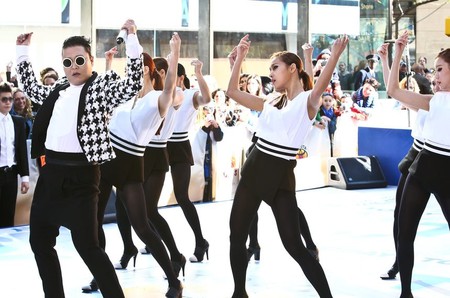 As one of South Korea’s most famous stars, you probably expected to see Psy pop up during the Winter Olympics.

Besides from his most famous song ‘Gangnam Style’ sound-tracking the entrance of the athletes during the opening ceremony, the singer didn’t actually make an appearance.

It’s now been revealed that he was invited – but turned down the chance to perform.

Song Seung Hwan, the director of the opening and closing ceremonies for the Olympic event, spoke about it on Kim Eo Jun’s News Factory radio show.

According to Soompi, the radio show host said: ‘There was a lot of talk saying, “While there are many internationally famous singers, wouldn’t Psy appear based on his recognition?” A lot of people asked why Psy didn’t perform (at the ceremonies).’

Song then explained: ‘I met with Psy. However, he himself was burdened by the thought of continuing to perform Gangnam Style. Instead, we included Gangnam Style when the athletes were entering during the opening ceremony. For that, Psy said he would personally arrange the music, so (the track used) was one arranged by Psy himself.’

Asked why Psy had turned down the chance to perform, Song replied: ‘That’s right. He said that he was highly criticised during the Asian Games.’

why no Psy and BTS in the #winterolympics closing ceremony… 🤔

The singer was one of the performers during the 2014 Asian Games opening ceremony.

‘I think it’s quite difficult, being a celebrity. If they perform at some event, people criticise them saying, “Why did they appear?,” and if they don’t appear, they’re criticised for not appearing,’ he added.

Song also revealed that K-pop band BTS were also asked to perform but couldn’t fit it in with their jam-packed schedule.

He said: ‘We sent an offer to BTS early last year, but they have so many schedules abroad. It seemed likely that they would be abroad during the Olympics, so it was difficult to schedule them ahead of time.’