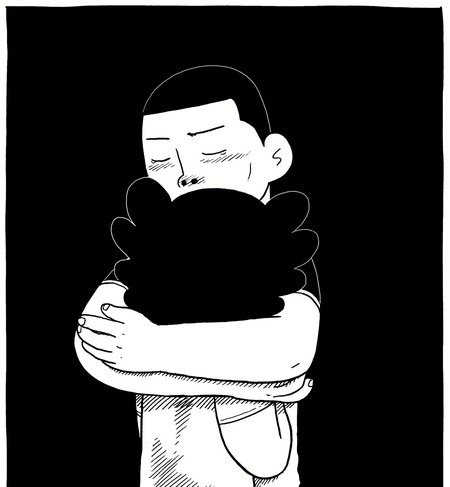 From Uncomfortably Happily (p.398), by Yeon-sik Hong | Courtesy of Drawn and Quarterly

City-dwellers and generally silent types will know of a particular and rather unique kind of feeling, which has the habit of striking either during moments of extreme hustle-bustle, or rare calm. It is a certain intense peacefulness, a contemplative contentment, placing the victim at odds with whatever excitement there may be around or, in the obverse case, at one with the tranquility of things.

The emotion has an uncommon depth to it, going at once down to a caressing recognition of universal futility, and up to a cheerfulness at the lack of pressure associated with it. It is, in other words, quite a complicated mix of nostalgia, euphoria, and insouciance—an insolently modern muddle of sad happiness or happy sadness, possessing those who seem stuck amid the thick of things. 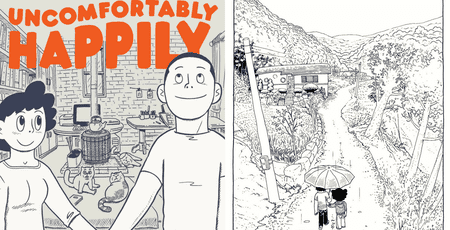 From the cover, and inside, Uncomfortably Happily | Courtesy of Drawn and Quarterly

Uncomfortably Happily is, at its best, about just that. The work centers on two years in the relationship between Hong and his wife Sohmi Lee, who is also an artist. Both are constantly harassed by the stresses that come with living in a big city like Seoul, while also trying to make it as ‘creatives’—to use the decidedly uncreative modern term—and decide to move to a mountain cabin in the nearby countryside with their three cats (and, eventually, their dog). Life there turns out to be far from as idyllic as they’d pictured it, though not all bad either. It’s just, as you’d expect, rather different. Crucial, however, is the recognition that whatever anxieties had been dogging them are largely due to themselves, not their environment.

Though a prime example of modern realism in its narrative, Uncomfortably Happily isn’t wholly so aesthetically: Hong draws cartoonish characters over delicate, and precise, backgrounds. The resulting effect sometimes approaches the moody, contemplative themes of the story, and certainly adds a beauty to the work that may not necessarily have been conveyed otherwise. As many have realized before, if you’re going after the melancholy of modern life, you’re going to have to do it in style. 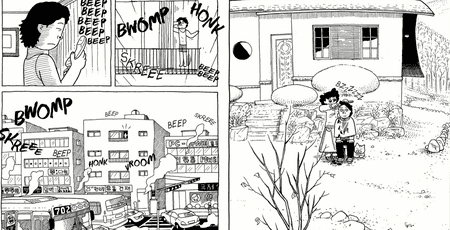 From Uncomfortably Happily | Courtesy of Drawn and Quarterly