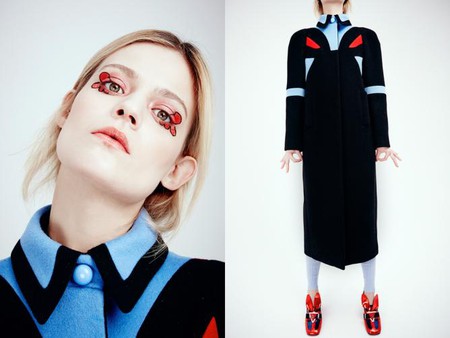 A South Korean designer who studied in the fashion capital of Antwerp, Minju Kim has a style that combines haute couture with children’s play. She has made her career through designing brave and daring collections with large motifs and a color palette representative of a packet of sweets. A graduate of Korea’s fashion school SADI, Kim is quoted as saying “I was unsure which way to go, drawing or fashion. Luckily, in Antwerp I found the school that allowed me to do both in a balanced way. After a time of enjoying both freely, fashion became my one dream.” 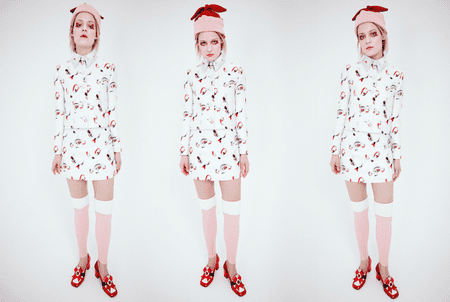 Her collection at 2015’s LFW was richly varied and Minju Kim, who has recently collaborated with Disney, presented items clad with Minnie Mouse, along with a progressively maturing style as the models worked through the range. As the range ripened, the designs entering the runway included leather headpieces worn with peplum skirts, and boxy crop tops with shoulder slices. Minju Kim replaced the girly style seen previously with angular cuts and racier brassiere-style knitwear.

Minju Kim showed her brave and daring side once again, proving it is no wonder that she won the H&M Design Award in 2013 when she was just 26 years old. The designer was chosen over seven other highly talented students and was selected by a diverse jury that included H&M head of design Ann-Sofie Johansson, and London-based designer Jonathan Saunders. Minju won the chance to present her collection with her own show at the Mercedes-Benz Stockholm Fashion Week, as well as a prize of €50,000. She also won the opportunity to develop pieces from her collection to be sold in selected H&M stores the autumn following the show.

The collection was titled Dear My Friend, and explored contrasting color, infusing traditional elements, such as Japanese illustrations on leather. These handmade items highlighted Kim’s strengths and fantasy. H&M creative advisor Margareta Van Den Bosch said, “we can work with Minju’s ideas and make a very special and playful collaboration.”

When Minju won the award she was still an undergraduate. Shortly after receiving the honor, the inventive and inspiring designer became a fully-fledged graduate of the Antwerp Academy of Fine Art’s Fashion Department. She presented her final collection Be Cover to a prestigious jury that, uniquely for the occasion of the institution’s 50th anniversary, included each of the renowned Antwerp Six. 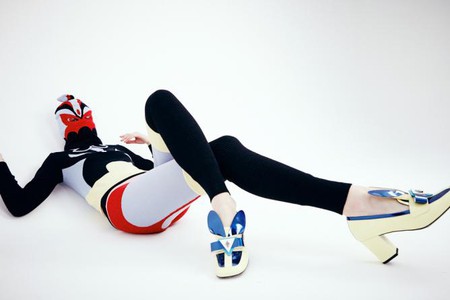 Minju has been quoted talking about her graduation day saying, “I felt so lucky; it was the happiest moment of my ‘fashion life’ so far. It was a beautiful 50th anniversary show, and I still can’t believe that I was part of this huge event. It was an honor to be presenting my immature collection, with a nervous voice, to this jury.”

She continued on to talk about her Be Cover collection and the inspiration behind it saying; “I developed my own version of Elphaba, the beautiful green witch from the musical Wicked: The Untold Story of the Witches of Oz. Her amazing energy and soft heart are covered by her green skin. I wanted to create a new exterior for her, that matched the way I see her, without prejudice.” 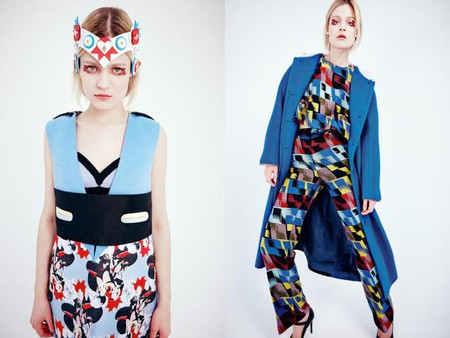 In terms of Minju Kim’s plans for the future, she has been quoted as saying, “I always wish for people to feel my happiness when they see my collection. Sharing my emotions through fashion is my dream. Before I won the H&M award, my goal was to work for a fashion house. However, after creating two collections since, I realize how fantastic being a fashion designer is. This year I pushed myself really hard to make these two collections, and somehow I feel I can’t stop it now. I am so addicted to the joys of my fashion world. I want to continue on from what I’ve been studying, keep on making a lot of drawings, keep on dreaming – it doesn’t matter where.”

For such a young and vibrant designer, the future certainly looks bright. We can’t wait to see what the South Korean star comes up with next.