The 10 Best Restaurants In Seoul

Hanu | © Eugene Kim/Flickr
Residents of Seoul are renowned for their propensity to dine out on a regular basis, partly due to the long hours that most people work, and partly due to the enticement of its vibrant culinary scene. Seoul’s wide array of restaurants, bars and market stalls encapsulate the riches of Korean cuisine, which has recently risen to global prominence. Here are ten of the best places to eat out in the city.

Hanjeongsik is the most lavish and luxurious type of Korean cuisine. A huge variety of smaller side dishes are combined with a main dish of meat, fish or a hot pot (depending on the season) to create an extravagant banquet. This originated in the royal palaces and aristocratic homes of ancient Korea, and these refined origins are still evident in the sheer abundance of dishes on offer in a traditional Hanjeongsik, which can be up to thirty. Seoul’s Song Jook Heon is a well-established purveyor of the Hanjeongsik tradition and offers a wonderful introduction to the more opulent aspects of Korean cuisine. 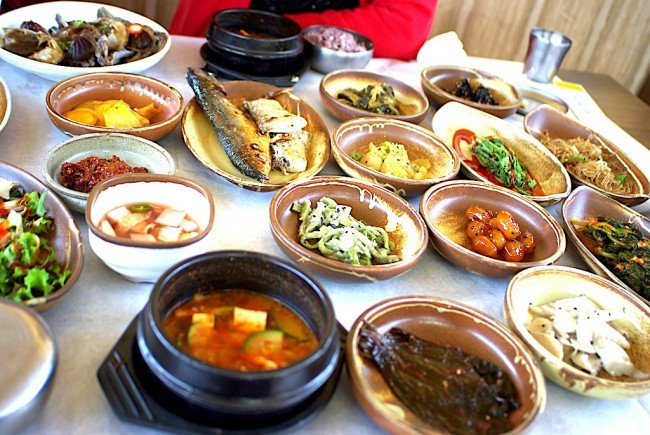 Restaurant, Korean, Asian, $$$
Galbi | © Selena N. B. H./Flickr
Specializing in beef, or Hanu, Byeokje Galbi concentrates on the more carnivorous side of the Korean food spectrum. It focuses on galbi, the Korean grilled or barbecued meat that has become famous throughout the globe. The thinly sliced pieces of beef are barbecued on the table in front of diners, along with a range of side dishes, to ensure maximum freshness and a convivial and social atmosphere. Byeokje Galbi is a refined and lavish take on the simple pleasures of the barbecue in which the quality of the meat is paramount. All of the beef served in the restaurant is from a Pocheon farm owned by the restaurant and is specially reared to ensure tenderness and flavor.
More Info
Open In Google Maps
1-4 Yangjae-daero 71-gil, Bangi 1(il)-dong, Songpa-gu Seoul, 138-051, South Korea
+8224155522
Visit website

Naengmyeon is a refreshing Korean staple. Cold noodles are made from either buckwheat or potatoes, and are then stewed in vinegary beef broth and served cold with cucumbers, pears, boiled egg, a spicy mustard sauce and occasionally topped off with cold braised beef. The dish is served in a distinctive stainless steel bowl and is a light and uplifting counterpoint to the heavier Korean classics. It is connected with longevity and good health in Korean culture. Eulji Myun Oak has been serving Naengmyeon for over 30 years and is still a favorite among locals for its family feel and the sheer quality of its well preserved Naengmyeon recipe. 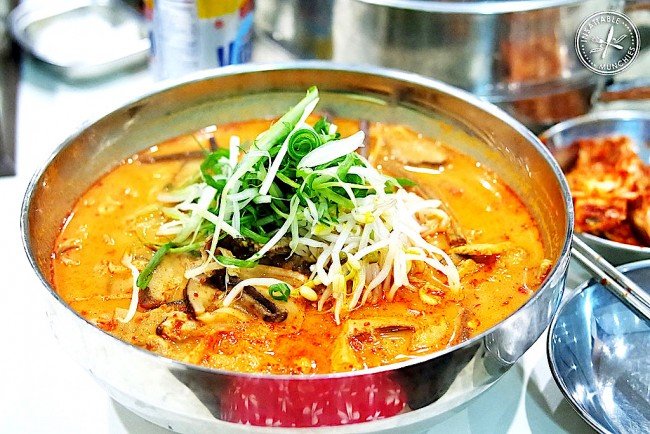 One of Seoul’s oldest surviving restaurants, Imun Seolleongtang, was opened in 1907 and has weathered the various tumultuous upheavals that have beset the city. It specializes in seolleongtang, a rich beef soup made by stewing ox bones and brisket over a period of several hours, and adding spring onions, garlic and peppers. The milky white soup is then added to rice or noodles and combined with the typical Korean side dishes of kimchee and radishes. The simple, hearty soup is a local delicacy and has been for many centuries. It traces its origins to the proclamation of King Seongjong that a dish should be created which could feed the maximum number of people using the least amount of ingredients, the result of which was seolleongtang.

Restaurant, Korean
A self-proclaimed museum of Korean cuisine, Si Hwa Dam is a visual feast as much as a culinary one. The name of the restaurant translates as ‘poetry, painting and discussion’, and the innovative cuisine lives up to these artistic qualities, offering a refined and meticulous approach to presentation. The food is so immaculate it almost seems a shame to eat it. The stylized approach to Korean classics and authentic Korean ingredients are combined with an emphasis on elegance and a revival of Korean cultural traditions. The restaurant is located in the traditional artisan area of Insadong.
More Info
Open In Google Maps
2층, 254 Itaewon-ro, Hannam-dong, Yongsan-gu Seoul, 4400, South Korea
+8227939292
Visit website

Jjukkumi (mini-octopus) is another delicacy unique to Korea. These baby octopuses are typically marinated in a red chili ‘gochugaru’ sauce and then stir-fried. It is notorious for its spiciness, even among the spice-loving locals. The dish is often served with grilled pork belly (samgyeopsal) or perilla leaves and is a common accompaniment to the massive quantities of Soju which is drunk every day in Seoul. The best place to find Jjukkumi is the ‘Jjukkumi Alley’ in Yongdu-dong, in which every restaurant is dedicated to the fiery treat – there is even a Bronze statue of an octopus marking the entrance to the alley. Na Jeong-sun Halmae Jjukkumi is considered the best of these restaurants and is run by Grandma Na Jeong-sun who has served her own distinctive take on Jjukkumi for several decades.

Restaurant, Korean, Asian, $$$
A refined and simple take on Korean cuisine, this restaurant is almost minimalist in its approach, with traditional flavor combinations pared down to their most vibrant. Their specialties include black Jeju pork and barley fed beef from a local farm, as well as the conventional bossam(pork shoulder) and bulgogi(marinated grilled beef). The minimalist approach extends to the reserved and even austere interior, which allows the vivid flavors of Korean cuisine to speak for themselves. Where the restaurant does bring in elements foreign to Korean cooking is in the wine list, which is one of the most extensive in Seoul, since the owner Sun-hee Kim is intent on proving that wine can be combined with Korean food to delectable effect.
More Info
Open In Google Maps
7 Apgujeong-ro 50-gil, Apgujeong-dong, Gangnam-gu Seoul, 135-120, South Korea
+8225491459

Restaurant, Korean, Asian
Duck is not commonly a staple part of the Korean diet and tends to only be served in specialist restaurants where the unique cooking method is an essential part of the culinary experience. In the Nolboo Sulfur Duck Restaurant, duck is stuffed with root vegetables and nuts such as ginseng, licorice roots, gingko nuts, figs and pine nuts, and then placed inside an earthen ware oven where it is slowly roasted for over three hours. The restaurant is renowned for the quality of its ducks, which are fed sulfur to maximize their tenderness. The restorative and healthy qualities of this dish are recognized by locals who flock to Nolboo; combined with the lengthy cooking time of the duck, this means reservations are required.
More Info
Open In Google Maps
131 Ogeum-ro, Bangi-dong, Songpa-gu Seoul, 138-050, South Korea
+8224255292
Visit website

Restaurant, Seafood, Asian, Korean, $$$
Serving only the freshest seafood, this restaurant gets its daily catch from a town named Goraebul in Gyeongsang province. The freshness of their seafood allows them to serve many dishes raw in distinctively Korean takes on the Japanese traditions of Sushi and Sashimi. The menu is dependent on the daily catch and often features octopus, clams and flatfish, along with varieties of gwamegi (Pacific herring) and fish roe. The clean and simple flavors of the fish are intensified by the minimalist presentation and simple additions of rice or fermented beans.
More Info
Open In Google Maps
62 Nonhyeon-ro 79-gil, Yeoksam 1(il)-dong, Gangnam-gu Seoul, 6239, South Korea
+8225563677
Visit website

Market
Gwangjang Market | © Republic of Korea/Flickr
Not a restaurant per se but home to some of Seoul’s finest cuisine, Gwangjang Market is a mecca for anyone who has tasted the delights of Korean street food. Featuring stalls selling dishes such as bindaeduk(mung bean pancakes), tteokbokki(spicy rice cakes), sundae (blood sausage stuffed with noodles) and jokbal(braised pig’s trotters), as well as the classic and ubiquitous bibimbap, this is the place to experience the widest variety of Korean cuisine. The atmosphere of the market, which also sells a range of fresh produce, imbues this experience with authenticity, and is an essential part of any food lover’s trip to Seoul. The cultural and social roots of Korean cooking are best expressed in its street food, and Gwangjang Market is the place to experience this.
More Info
Open In Google Maps
88 Changgyeonggung-ro, Jongno 1(il).2(i).3(sam).4(sa), Jongno-gu Seoul, 110-440, South Korea
+82222670291
Visit website