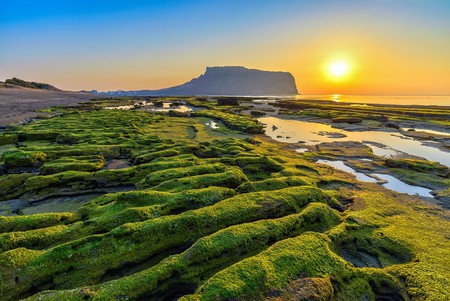 Located 90 kilometres off South Korea’s southern tip, Jeju Island is known for beach resorts, honeymooners and quirky museums. There are 15 million tourists who visit the volcanic island every year, drawn to its subtropical climate and spectacular hikes. Jeju was declared one of the global Seven Wonders of Nature in 2011, and is also a UNESCO World Natural Heritage site. Beneath the island’s glittering blue water and green hills, however, a dark side lurks. Here are Jeju’s most chilling ghost stories.

One of the most brutal episodes in Jeju‘s history was very recent — just before the outbreak of the Korean War (which began in 1950). In 1948 and 1949, the Korean government was concerned about a communist insurgency on the island. They sent troops to deal with the issue, and in the ensuing conflict between 14,000 and 30,000 people were killed, including women and children. Whole villages were massacred by government forces, and leftists were tortured for information. Many of Jeju’s caves, Hallasan Mountain, and other hiking spots are not only beautiful, but were a refuge — and all too often, a place of death — for the island’s former inhabitants. Even Jeju International Airport has scars from the tragedy; just beside the airport’s main runway, a mass grave was found that contained 388 bodies. Ghost sightings of the Jeju Uprising’s victims are therefore common.

Korea’s mul gwishin (물귀신, meaning ‘water ghosts’) are the spirits of those who have drowned by misadventure or suicide. As Jeju Island is surrounded by deep water — and, as a fishing economy, has suffered many drownings — these are some of the scariest ghosts on the island. Out of the water, mul gwishin can be recognised by their pale skin and constantly wet clothes. They’re most often glimpsed in the water, however, where they use their unnaturally long arms to catch hold of the unwary and drag them to a watery grave. Don’t get too close to Jeju’s sea on a dark night, lest you find yourself with a deathly pale hand wrapped around your ankle. Mul gwishin can be found in any body of water — distressingly, including bathtubs.

While in Korea I have been inquiring about traditional ghost stories. BTW- Koreans are very serious about their ghosts. Just hinting at the subject sent my assistant packing. There are many however, a couple resonated with me- Please allow me to introduce the Mul gwishin (물귀신) or water ghosts. Apparently lonely souls who have drowned. They don’t like being alone in the cold water, so they will grab swimmers and drag them down into the deep waters for company. Cozy thought. #koreanghoststories#mulgwishin#waterghost#31daysofhalloween#macabre#ghoststories#inspiration

Shamanism (‘muism’) is practised all over Jeju Island, and is an important part of the island’s life, especially amongst older people. A shaman (in Korean, mu or 무) is believed to act as an intermediary between the spirit world and the everyday, and is normally an older member of the community, either male or female. There are approximately 400 shrines on the island, at which worshippers leave offerings of fruit, rice and goods such as cloth. As part of the island’s belief system, shamanism is very ordinary. It’s mentioned here only because most of the spirits who inhabit these shrines are ‘grandmother’ spirits — and if you’ve ever seen an angry Korean grandmother, you’ll know just how scary they can be!

Between Jeju City and Hallasan National Park lies Dokkaebi Road, also known as the ‘Mysterious Road’ or the ‘Ghost Road’. At first sight, it looks just like an ordinary road — but if you try to roll a ball downhill, it will reverse and go up the slope. Other objects, liquids and vehicles will do the same. Don’t get too freaked out, however; it’s not supernatural, but a natural optical illusion. Although the road appears to slope uphill, it’s actually going in the opposite direction. The Mysterious Road is a popular visitor attraction. 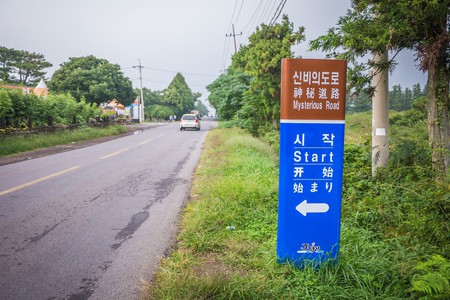