A History of Black Medallists at the Winter Olympics

Pyeongchang 2018 will see more black athletes competing at a Winter Olympics than ever before. Lighting their path are groundbreaking black medallists that went before them.

In 1924 in Chamonix, France, the Olympics first held the winter version of its famous Games. While its summer sister debuted at the end of the 19th century (in its modern iteration, at least), it took another 28 years before Olympic sport made its way onto the snow and ice. The Second World War saw a brief hiatus in the the first part of the 1940s, but since Chamonix there have been 22 Winter Olympic Games. South Korea’s Pyeongchang hosts the 23rd edition, and while there have been close to 1,000 medals dished out, of the athletes that have received them, just 12 have been black.

Of those athletes, just three countries are represented: the USA, Canada and Germany, while the medals have been won across just four sports: ice hockey, bobsleigh, speed skating and figure skating. In the history of the Winter Olympics, 45 different nations have won medals, and while many of those nations may have tiny black communities, such as Japan or Norway, for example, it’s somewhat more surprising that the likes of France, the Netherlands or Great Britain haven’t produced successful black Winter Olympians.

When New Yorker Debi Thomas took home bronze in figure skating at the 1988 Games in Calgary, she became the first black athlete to medal at the Winter Games. Her win came 84 years after George Coleman Poage became the first black athlete to medal in the summer equivalent when he won his two bronze medals in the 220-yard (200-metre) hurdles and 440-yard (400-metre) dash at the St Louis Games in 1904.

Since Poage’s gold, black athletes have not only been successful at the Olympics, but gone on to completely dominate particular sports, especially on the athletics track. The athletes that have been converted from sprinting to bobsleigh follow a logical progression given their talent. The speed and explosive power needed for sprinting lends itself well to the start of a bobsleigh run, in particular, which helps explain why those sports have seen black athletes succeed to some degree. 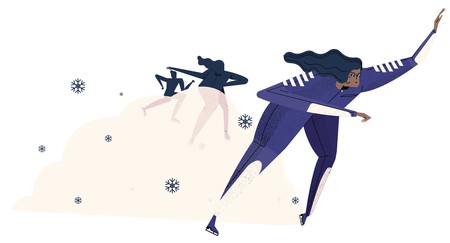 Despite Thomas’s gold in 1988, it would be a further 12 years, at the 2002 Games in Salt Lake City, before black athletes took to the podium again. Three medals were won by black athletes, with American Vonetta Flowers taking gold in bobsleigh; the USA team of Randy Jones, Garrett Hines and Bill Schuffenhauer winning silver, also in bobsleigh; and the Canadian ice hockey team, which included Jarome Iginla among its ranks (or, to give him his full name, Jarome Arthur-Leigh Adekunle Tij Junior Elvis Iginla), taking gold.

Of the 2002 medallists, all the bobsleighers came from track and field backgrounds. Flowers took up the sport after her husband, also a sprinter, alerted her to a flyer urging track and field athletes to try out for the US bobsleigh team. Just less than two years later, Flowers would go on to become the first black gold medallist at the Winter Games. Schuffenhauer only joined Hines and Jones (and white athlete Todd Hays) in the final team when Pavle Jovanovic tested positive for steroids and was handed a two-year ban from the sport. When the team secured silver, they ended a 46-year Olympic medal drought in bobsleigh for the Americans. For hockey player Iginla, he had only made the Canada team at their summer camp just prior to the Games. The winger scored two goals in the gold-medal match on top of his 20-year NHL career in which he represented the Calgary Flames, Pittsburgh Penguins, Boston Bruins, Colorado Avalanche and Los Angeles Kings.

Four years after the Salt Lake Games, in Turin, Kalyna Roberge, Lascelles Brown and Shani Davis all brought home medals. Roberge, a Canadian speed skater, won silver in the 3000-metre relay, a feat she repeated in 2010. Her compatriot, Lascelles Brown, won silver in the bobsleigh having already represented Jamaica from 1999 to 2004. He applied for Canadian citizenship in 2005 and after it was awarded went on to win a silver in 2006, following it up with a bronze four years later.

Like Roberge and Brown, speed skater Davis also won medals at both the 2006 and 2010 Games, picking up two golds and two silvers in each. His four medals make him the most decorated and successful black athlete at the Winter Olympics since its inception. The medals all three won in 2010 helped contribute to the standout year for black winter sports athletes.

The 2010 haul of eight medals, including two gold, is the best total for black athletes in history. It’s also the only year in which the three different nations mentioned above were represented as medallists. On top of Roberge, Brown and Davis, Iginla again won gold with the Canadian ice hockey team, while Shelley-Ann Brown, another Canadian, won silver in bobsleigh. It was the year black German athletes made the podium, with Robin Szolkowy winning bronze in figure skating and Richard Adjei taking silver in bobsleigh.

In the context of what has happened in the century before, 2010 was an undoubted success, with results that appeared to represent progression. The reality, however, is that not a single medal was won by black athletes at Sochi four years later.

This year, in Pyeongchang, there will be more black athletes than ever before. Both Nigeria and Eritrea will make their Winter Olympic debuts, with the former represented by their women’s bobsleigh team and a lone skeleton athlete, and the latter represented by alpine skier Shannon-Ogbani Abeda. Within the USA team, there are 10 black athletes, with black women making up seven of the nine women on last year’s American women’s national bobsleigh squad. Meanwhile, Jamaica return, racing in skeleton and bobsleigh, while both Ghana and Kenya are sending their second-ever athletes in the form of skeleton racer Akwasi Frimpong and skier Sabrina Samider.

The absence of black athletes for such a long time, and the fact that they remain a tiny minority at the Games, certainly when compared to the summer event, may be down to a number of issues. Countries that traditionally compete in winter sports may simply have little to no black populations, as highlighted above, but that’s certainly not the case across the board. Economic factors play a part, with the high costs of training, travelling and equipment ensuring that low-income communities with higher percentages of black populations are simply never given the opportunity to try winter sports in the first place. In the US, for example, children in those same communities have far greater access to the likes of football, basketball or track and field than skiing. They also have black role models in those sports, a number of which will have grown up in similar circumstances. Such a path to success is difficult, but at the very least the concrete examples make them still possible.

Climate must also play a part. In Africa, aside from a select few mountain ranges, such as the Drakensberg or Atlas Mountains, there simply aren’t enough ski slopes or ice rinks to learn or develop properly at most winter sports. So often, sport is dictated by environment. The lack of black athletes has nothing to do with athletic prowess, but a combination of economic and environmental reasons. That’s why the appearances of the likes of Ghana, Nigeria, Kenya and Eritrea at the Games are so key to development. That said, success is key; being a novelty won’t inspire anyone. It’s important that countries that can afford to implement initiatives which can increase black representation in winter sports, like the US, Canada and Great Britain, do so. The lack of opportunity, encouragement or support offered to black athletes in terms of winter sport uptake is clearly an ongoing issue, making the achievements of these black medallists all the more impressive.

Black medallists at the Winter Olympics: