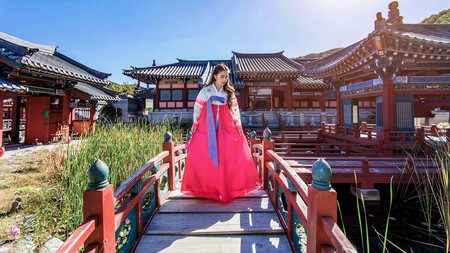 The hanbok (traditional Korean clothing) has a history as colourful as each garment. It was worn daily up until about a century ago; however, it remains an important part of Korean culture, with people wearing it on special occasions and holidays. We take a closer look.

The Korean hanbok, which has roots in present-day northern Korea, northeast China and part of Mongolia, was designed to facilitate ease of movement. The fundamental structure of the traditional Korean dress, specifically the jeogori (jacket), baji (trousers) and chima (skirt), was established during the Three Kingdoms of Korea (57BCE to 668CE), and the design features have remained relatively unchanged to this day. 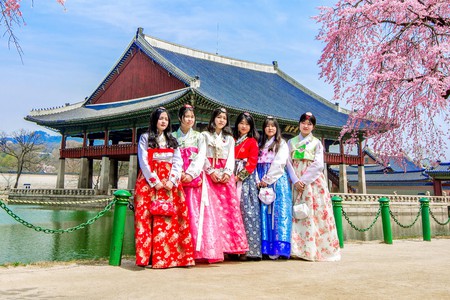 Hanbok can be classified into everyday, ceremonial and special dress, and then further categorised by gender, age and season. Regardless of the differences in these classifications, the basic aesthetic framework of all hanbok is centred around the Korean fondness for the natural, the desire for supernatural protection and blessings and the Confucian dress code, which emphasises propriety and primary colours. 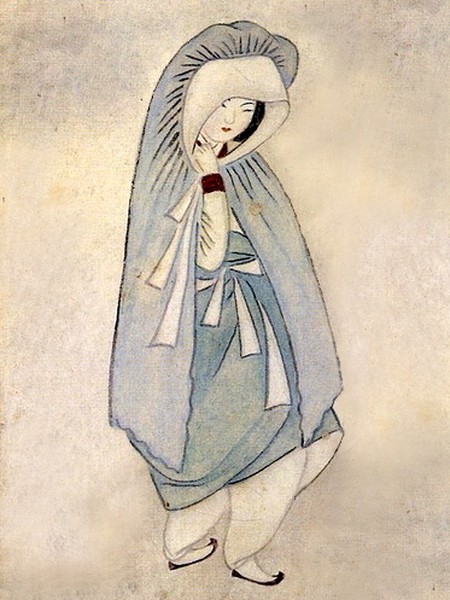 The general design of hanbok aims to create a delicate flow of lines and angles. Similar to the soft, sloping eaves of hanok (traditional Korean houses), the balance of the curved baerae (the bottom line of the jacket sleeves) with the sharp angles of the dongjeong (the creased white lining of the jacket collar) illustrates the softness and elegance of traditional Korean aesthetics.

A person’s social position could also be identified by the material of his or her hanbok. The upper classes wore closely woven ramie (plant-based) cloth or other high-grade lightweight materials during warmer months. They dressed in plain and patterned silks throughout the remainder of the year. Those in the working class were restricted to cotton. 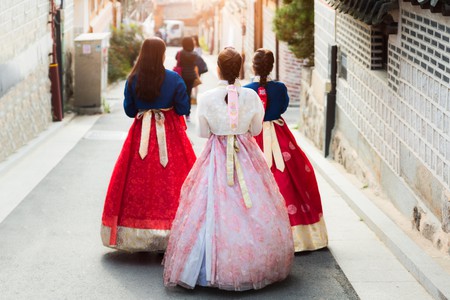 Traditionally, you could tell a person’s social position and marital status by the colour and material of his or her ‘hanbok’ | © Prasit Rodphan / Alamy Stock Photo

Patterns were embroidered on the traditional Korean dress to represent the wishes of the wearer. For example, peonies on a wedding dress signified a wish for honour and wealth. On the other hand, lotus flowers symbolised the hope for nobility, while bats and pomegranates illustrated a desire for children. Dragons, phoenixes, cranes and tigers were reserved for the hanbok of royalty and high-ranking officials.

Korea’s traditional dress has undergone various changes throughout its more than 2,000-year history, and it continues to evolve today. Speciality designers have made classic motifs wearable with designs that render traditional patterns and structures in simple cotton, linen, leather and lace. These modern reinterpretations of the hanbok have made a splash in the fashion world across the globe, from the Champs-Élysées to the catwalks of New York Fashion Week.

However, while it may continue to change, hanbok retains a glorious cultural heritage, which is not only valuable for its historical value and the preservation of Korean traditional clothes but also its uniquely Korean artistic significance.