The Must See Temples in South Korea

South Korea masterfully balances rapid urbanization with revered cultural traditions. Among its steel skyscrapers and bustling cities lie the calming beauty of more than 900 traditional Buddhist temples, centuries-old architecture tucked among the country’s numerous mountains. Korea has a 1,700-year Buddhist history, but regardless of your religion, these beautiful temples offer a quiet refuge to meditate or seek peace of mind. 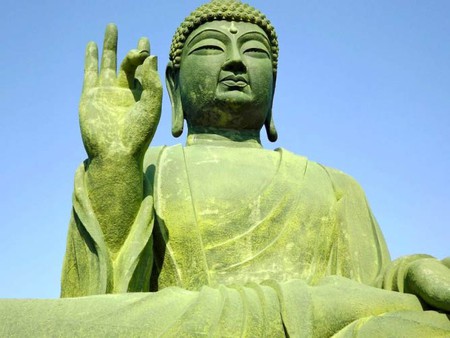 Weighing in at 60 tons, a giant bronze sitting Buddha welcomes visitors at the top of 203 stairs at Gakwonsa Temple in the city of Cheonan. Devotees kneel on a platform in front of the mammoth statue or follow the ritual of walking around the Buddha three times while praying.
A relatively new temple, it was built in 1977 at Mt. Taejo with the specific purpose of focusing prayers for the reunification of North and South Korea. The temple’s layout stretches at the foot of Mt. Taejo with various halls and altars of worship.
Besides being home to one of the largest sitting Buddhas in Asia, Gakwonsa is one of the largest temples in Korea, second to Bulguksa Temple in Gyeongju.

With a population greater than New York City, at over 10 million inhabitants, Seoul sits between the Han River as a beacon of economic growth and Korean pride. The Bongeunsa Temple resides among the high rises of Samseong-dong in the Gangnam-gu district of the capital, north of COEX building.
Built in 794 during the reign of Shilla King Weongseong, the temple receives on average more than 10,000 devotees and tourists daily. It houses 3,479 Buddhist scriptures, and every September 9, monks perform a Buddhist ceremony where they march carrying the scriptures on their head while reciting Buddhist rites.
Bongeunsa even offers temple stays, where visitors can spend two days experiencing daily monastic life. Programs include tea ceremonies, Buddhist services, zen meditation and monk consultation.
Bongeunsa Temple, 531, Bongeunsa-ro, Gangnam-gu, Seoul, South Korea, +82-2-3218-4895

Shrine
Facebook
Email
Twitter
Pinterest
Copy link
Share
Map View
While most temples are situated among mountains, Haedong Yonggungsa Temple in the coastal southern city of Busan stretches along the coastline overlooking the East Sea and Songjeong beach. Stone stairways and lanterns course along the rocky shore offering breathtaking views of the ocean and sunrise.
Haedong Yonggungsa dates back to 1376 during the Goryeo Dynasty and was destroyed during the Japaneseoccupation but reconstructed in 1970.
Visitors flock to the temple on New Year’s to see the first sunrise of the year and the temple is covered with lanterns in March and April to commemorate Buddha’s birthday. Haedong Yongungsa boasts a sanctuary, shrine and a cave-enclosed sanctum at sea level. Four lion statues, representing joy, anger, sadness and happiness, sit at a three-story pagoda.
Open In Google Maps
86 Yonggung-gil, Gijang-eup, Gijang Busan, 619-902, South Korea
+82517227744
Visit Website
Give us feedback

A smaller temple, but definitely unique with an otherworldly aura, Tapsa Temple sits flanked by cliffs and mountain peaks.
Visitors can reach the temple’s unique stone pagodas at Tapsa Temple through a scenic hike through the Maisan (horse ear) mountains in North Jeolla Province. According to myth, the mountain formed when two gods came down to earth to have a child. When traveling back into the sky, a mortal woman saw them as they were rising, trapping them into stone form. Today, visitors can see this ascension in the form of a father peak, mother peak and child peak of Maisan Mountains.
In the late 1800s, scholar Yi Gap-yong, singlehandedly built over 120 stone pagodas at the temple in Jinan-gun, some as high as 9 meters, without mortar or mechanical devices. Over the span of 30 years, he collected stones during the day and built the conical pyramids at night. Despite strong winds and more than a century, the towers have never swayed or crumbled and more than 80 still stand at the site.
The temple also boasts an icicle phenomenon. During the winter, bowls of water freeze into icicles that stretch northward.
Tapsa Temple, 8Dongchon-ri, Maryeong-myeon, Jinan-gun, Jeollabuk-do, South Korea, +82 63-432-0652

The Sudeoksa Temple is a head temple of the Jogye Order of Korean Buddhism and crucial in the country’s Buddhist history. Its main hall, erected in 1308, is a designated national treasure.
The 1,500-year-old temple sits in the Deoksungsan Mountains in the western Korean city of Yesan and has a regular schedule of temple stay programs to bring zen to visitors. Temple stay visitors rise to bells at 3am and start the day with chanting. Prepare to find peace in prayer services, meditation hikes and hot spring baths.
Sudeoksa Temple, 79 Sacheon 2(i)-gil, Deoksan-myeon, Yesan-gun, Chungcheongnam-do, South Korea, +82-41-339-8932