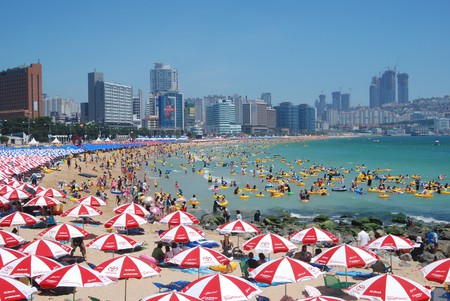 Busan, South Korea’s second city, is built along the country’s sunny south coast. It’s famous for its beaches, its nightlife (especially in the many bars thronged around its beaches), and its parties. So, it’s no surprise that Busan has some great summer beach festivals. Even better, you can attend them all free of charge! Here’s our guide to the city’s best beach festivals.

Busan Sea Festival happens in August, and is Busan’s biggest summer beach festival — not least thanks to its sheer geographical breadth. It’s held over almost the whole coastline, including Haeundae, Gwangalli, Songdo, Songjeong and Dadaepo Beach, and offers a diverse range of entertainment. With performances, cultural events and interactive programs spanning day and night, each beach has something different to show. Busan Sea Festival was first held in 1996 to promote tourism to the city’s beaches, and has grown in strength over the more-than-ten-year stretch since then. Festival highlights include firework displays, on-beach dance parties, and a Water Carnival.

The festival happens over several locations; check the official festival programme for directions, dates and times. The 2018 Busan Sea Festival runs from August 1–6.

Haeundae Sand Festival is held on the bustling Haeundae Beach, and presents lots of opportunities for photo-taking — giant sand sculptures, created by world-class artists, tower over the beach in spectacular defiance of sand’s impermanent nature. The festival is held in May, so the weather is normally bright and clear, but the sculptures remain marvellously undamaged by the elements given the festival’s beachside location. As well as sand sculptures, the festival line-up includes sand sports such as beach volleyball (which all are welcome to join), and musical performances from local and international artists. A large stage is set up on the beach so that festival-goers can dance the night away on Haeundae’s sands.

To get to Haeundae Beach, take exit 1 or 3 from Haeundae subway station and walk straight; the beach is less than five minutes’ walk away. The 2018 dates for Haeundae Sand Festival are May 19–22. 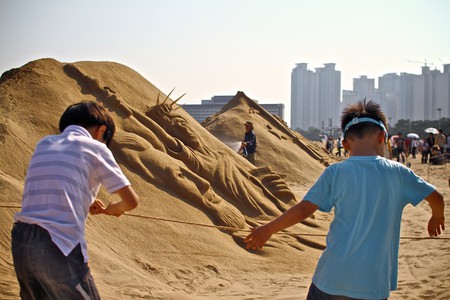 One of the biggest festivals on the Hindu calendar, Holi celebrates the arrival of spring in colourful style! Holi Hai is organised by Busan’s foreigner and Indian community, and — in traditional style — involves throwing lots of brightly coloured paint powder at each other. It’s on Gwangalli Beach, so there’s no excuse not to get a little messy. Note the early festival time — it runs from 10am to 5pm. For those who want to continue the party afterwards, there’s no shortage of bars in the area, and a number of these have special Holi deals for festival-goers. Register to get free paint powder. As well as paint-throwing, there will be live music and lots of good energy; so bring your good vibes and remember to wear white.

To get to Gwangalli Beach, take the subway to Gwangan station and follow signs for the beach (it’s less than ten minutes’ walk). In 2018, Holi Hai will be held on May 5. 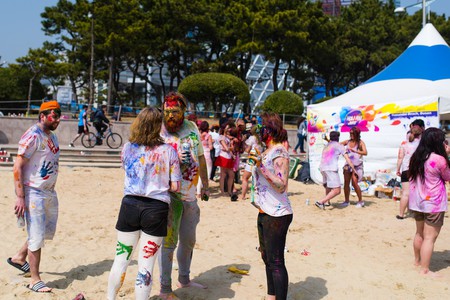 Summer might be over, but the party never stops. A highlight of Busan’s yearly calendar is the annual Busan International Fireworks Festival, held in October at Gwangalli Beach. As well as a spectacular fireworks display, the evening programme also includes live music performances, laser light shows and cultural displays. The festival regularly draws crowds of over one million visitors.

In 2018, Busan International Fireworks Festival will be held on October 27.