'Baby Shark': The Korean Song That's Taking Over the World 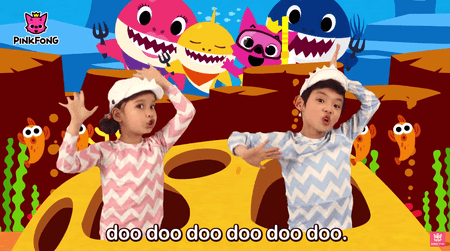 If you’re a parent, an internet user, or generally just a functional member of society, you’ll more than likely have heard the ‘Baby Shark’ song by now. Here’s the story behind its meteoric rise.

Created by Korean entertainment company Pinkfong, ‘Baby Shark’’s catchy, simple lyrics have earwormed their way into brains all over the world. The song has been watched 3.3 billion times, smashed its way into the UK music charts, and inspired a viral dance craze, #babysharkchallenge.

The original Pinkfong video comes along with an equally simple dance routine, demonstrated by two small children in front of a green screen. It’s this dance routine that has taken over the Internet (and it’s annoyingly catchy — watch the song more than once and try to stop yourself from doing it).

If you don’t have children in your immediate social proximity, you might be asking what all the fuss is about. Well, ‘Baby Shark’’s popularity can be put into perspective most easily through the numbers: the YouTube video has been watched over 1.6 billion times, more times than the equally inescapable ‘Let It Go’ (1.57 billion views). ‘Baby Shark’ has been watched 3.3 billion times across all its platforms, which puts the video up there with another Korean viral hit, Psy’s gargantuan ‘Gangnam Style’ (3.2 billion views on YouTube). K-pop band BTS might have broken records earlier this year with their music video for ‘Fake Love’, but at 307 million views it falls far behind ‘Baby Shark’.

Jamie Oh, marketing director at SmartStudy — Pinkfong’s parent company — shared that K-pop was an important influence on Pinkfong’s content, which might help to explain why the song is so darn catchy. Citing the song’s ‘trendy beats, fun rhythms, and repetitive hooks’, Oh describes it as ‘K-pop for the next generation’.

‘Baby Shark’, Oh tells us, was also inspired by a traditional sing-along chant, which was given a fresh, contemporary twist by Pinkfong. Although she doesn’t mention it, a quick Internet search reveals another source of inspiration for the video — an utterly terrifying German techno version called ‘Kleiner Hai’ (watch at your peril).

‘Baby Shark’ might be aimed firmly at the under-fives, but its appeal is much more wide-ranging. It currently sits at number 32 on the UK music charts, rubbing shoulders with Post Malone, Dua Lipa and Calvin Harris. Launched in November 2015, the video was popular with educators, parents and toddlers, but gained its big break when former Playboy model Amanda Cerny debuted the ‘Baby Shark Challenge’ on Indonesian television in 2017. The challenge went viral in Southeast Asia, and 2018 saw it go global, hitting Western shores in August with a slew of ‘Baby Shark’ videos from kids and adults alike.

Newlyweds Lisa and Phil Weeks, from Liverpool in the UK, performed ‘Baby Shark’ as their first dance, whilst British teenager Chloe Roy got lyrics from the song tattooed onto her forearm to commemorate an Ibiza holiday.

Even celebrities aren’t immune to its contagious appeal, as demonstrated in a recent Instagram post from queen of glam Kylie Jenner: Jenner shared a snap of herself captioned ‘maaamaa shark dooo doo doo dooo’, proving that even the rich and famous can’t get it out of their heads.