A Brief History of Beomeosa Temple 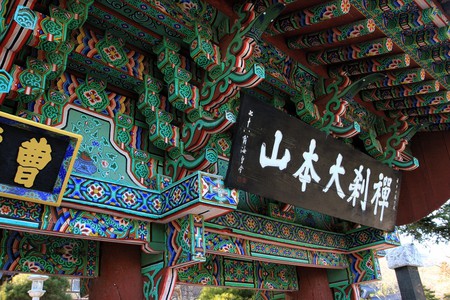 Perched on the slopes of Geumjeongsan mountain, Beomosa Temple is tranquil and quiet, despite its proximity to Busan’s hustle and bustle. Surrounded by hiking trails, woodland and striking mountain scenery, it’s a popular spot for many of the city’s inhabitants. It’s also one of three major temples in Korea, the others being Haeinsa Temple in Gayasan National Park, and Tongdosa Temple in Yangsan. With a history of over 1,300 years, it’s Busan’s most important temple and has a significant place within the tradition of South Korean Buddhism.

Beomeosa Temple was founded in the year 678 C.E., during the time of the Silla dynasty. At the time, attempted attacks from Japan were a very real threat to King Munmu, who was then in the 18th year of his reign. After an attempt made by a particularly large group of would-be-invaders, so the story goes, King Munmu was visited in his dreams by a mountain guardian spirit,who told him to climb to the top of the mountain and pray for seven days, after which the god would impart wisdom on how to defeat the invaders. Ready to try anything, King Mumnu made the journey accompanied by a priest named Uisangdaesa, and – with the god’s help – triumphed over the Japanese invaders. Filled with joy and gratitude, the king ordered Uisangdaesa to build a temple as thanks, and Beomeosa Temple was built.

Another important legend is the one which gives the temple its name; at the top of the mountain, there is said to be a well filled with clear, golden water which never runs dry. The magical properties of this well were bestowed upon it many years ago when a golden fish descended upon five-coloured clouds from heaven and made its home in the water. Beom means nirvana, eo means fish, and sa means temple, so Beomeosa’s name translates, roughly, to ‘The Heavenly Fish Temple’. 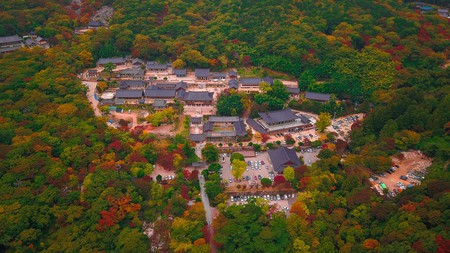 The Japanese invasion of 1592 hit Beomeosa hard. Many of its buildings were reduced to ashes and rubble, meaning that much of the present-day temple dates from the 17th and 18th centuries. The temple’s second gate, depicting four Heavenly Kings who ward away evil spirits, is an exception to this – although it’s an exact replica of the former gate, an act of vandalism unfortunately meant that it had to be entirely rebuilt as recently as 2012.

Beomeosa’s monks are famed for their Sunmudo martial art techniques. This ancient martial art is based on Seon Buddhism – Seon, or Sun, means ‘meditation’, and its Japanese variant is the better-known Zen – and was taught to monks as a form of dynamic meditation. Prior to the temple’s destruction during the 16th century Japanese invasion, the monks used Sunmudo techniques (and weapons including throwing stars, spears, swords and knives) to repel the invaders. In the 1930s and 1940s, the temple once again fought the Japanese, this time by underground resistance to Japan’s occupation of Korea. 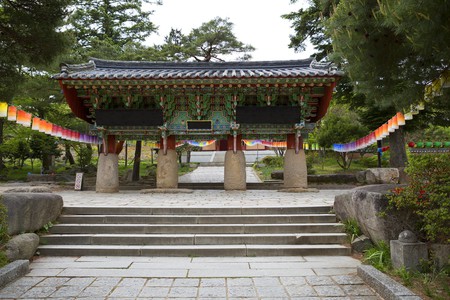 The first gate leading to the temple, Il Ju Mun – or ‘The One Pillar Gate’ – represents the physical boundary between everyday life and the spiritual world. Here, visitors to the temple are asked to leave behind their worldly suffering and secular thoughts. The name comes from the gate’s unusual formation; normally pairs of pillars are built side by side, but here the four pillars are arranged in a single row.

The Daewoongjeon is a canopy which houses the Sumidan (altar) which in its turn enshrines the Buddha. The word Daewoong comes from Mahabira, an Indian honorific term for the Buddha meaning ‘great hero’. Beomeosa’s Daewoongjeon is a beautiful example of Joseon Dynasty wooden craft work.

Located to the right of the main temple, Cheongnyeonam (meaning Blue Lotus) Hermitage is filled with elegant bronze statues, centred around a golden Buddha at the top. Halls on either side of the hermitage depict scenes of monks engaged in Sunmudo practice. If you have time, it’s also worth exploring the woodlands around the temple since there are 10 other hermitages in total scattered across Mount Geumjeongsan. 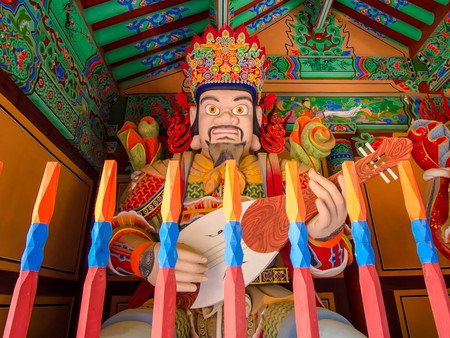 From Beomosa Temple subway station, head out of exit 5 or 7. You have a few options:

The temple and paths can be busy on weekends and holidays since it’s a popular starting point for hikes over Geumjeongsan mountain.

Beomeosa is a working temple, so observe basic temple etiquette: Be respectful of people praying and don’t dress in overly revealing clothes. The centre entrance is reserved for monks, so you should enter at the left or right (although many tourists don’t follow this rule).

For a real taste of Buddhist monastic culture, you can stay overnight and take part in the temple’s activities. Templestays can be booked online (and should be booked in advance). Be prepared for an early morning – like most Buddhist monasteries, the day starts with pre-dawn chanting. Expect lots of meditation, as befits Beomeosa’s role, as the region’s most prominent Seon temple.

Visitors in May will see the temple surrounded by wild wisteria blossoms. This is a unique sight within Korea, and the blooms have been designated as a national monument.