10 Up and Coming South Korean Artists You Need to Know 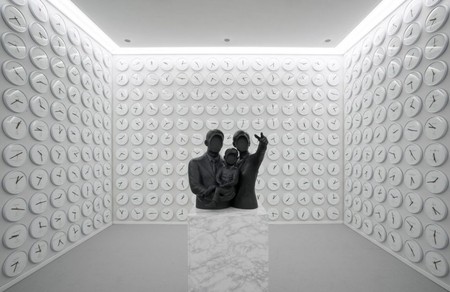 Lee Wans, Proper Time: Though the Dreams Revolve with the Moon pictured with For a Better Tomorrow, 2017 | © Lee Wan

Utilizing everything from melted chocolate to ultraviolet light, South Korean artists are making waves in the art world with their unconventional techniques and unrivaled creativity. As the country’s contemporary art scene continues to become more diverse, these 10 emerging artists stand out from the crowd with their unorthodox ideas and visions.

Nicknamed the “dark master of the imagination” by The Huffington Post, Xooang Choi entered the art scene in the early 2000s with his miniature figures of humans attempting to overstate their ability and situation. His painted polymer clay sculptures have since grown in scale and are at once delicately beautiful and nightmarishly haunting. Excellently molded to make them hyper-realistic, the artist’s macabre human sculptures twist and morph. The alienated characters vividly portray the pathological state of contemporary society, giving metaphorical shape to the twisted dimensions of human relations and social structures.

Eliciting complex emotional states and reactions to daily life without becoming either exceedingly literal or metaphorical is a difficult task to accomplish, but ceramist Gunyoung Kim is able to do so effortlessly. His figures – both solitary and in groups – are frozen in mid-thought combine a bold use of color with subtle, abstruse expressions and gestures. The works leave viewers feeling unsettled yet curious as to what the figures are thinking, as well as wondering what the artist’s thoughts might have been when crafting them.

Born and raised in Seoul, Jin Joo Chae’s aim is to unveil the complicated realities underlying cultural narratives through her artwork, which is influenced by Korean politics, international media contradictions and cultural displacement. She is most known for her widely celebrated “Choco Pie” pieces. In these inspirational works, Chae utilizes melted chocolate as a medium to raise awareness of political and human rights issues in North Korea, where the snacks are handed out in lieu of prohibited cash bonuses to workers. The cakes are then in turn sold on the black market for up to $10 USD – a hefty chunk of change in a country where the average monthly income is $150.

Seoul-born, New York-based artist Juntae TeeJay Hwang migrated, alone, aged 12, from South Korea to the U.S. to attend school. This deeply affecting experience has greatly influenced the artist’s works, which comprise of K-pop and propaganda-influenced videos, performances and installations that traverse the cultural collisions between East and West. His work draws upon the theory of intersectionality, where the prejudice against elements like race, sexuality and class cross paths, and how the interweave can drastically affect one’s position within society and as an artist.

While conventional photography captures reality, JeeYoung Lee’s images showcase new universes born from her own imagination. Her works are far more than simple photos. Lee is a painter, a set designer and a sculptor – not to mention the subject of her works – who transforms photographs into windows of enchanting alternative worlds. Inspired by various Korean fables, the surreal dreamscapes appear to be high-res photoshopped images, but they’re not; Lee avoids any kind of digital manipulation. Instead, the artist spends weeks and even months painstakingly constructing intricate scenes, designing the concept, crafting props and fine-tuning lighting to perfect the smallest of details.

The multimedia works of video and installation artist Je Baak are greatly inspired by Zen Buddhism and attempt to give viewers a sense of enlightenment, while encouraging them to experience the world around them in an entirely new way. The primary subjects of his works are often stripped of their familiar meanings, causing the viewer to create new ones. For example, the artist’s “His Silence,” a loop of authoritative figures such as Barack Obama, features mish-mashed clips of important speeches presented so that they don’t make sense, encouraging contemplation.

Recently featured on Saatchi Art’s “One to Watch” list, Kwang Ho Shin has made a colorful yet sinister splash in international art circles. Influenced by the German Expressionist movement, he creates arresting, larger-than-life portraits that are simultaneously mesmerizing and menacing, capturing complex human emotions and energies with shocking vision. Purposefully dismissing precise form and balanced color, the artist utilizes distortion and exaggeration to transport the inner life of his subjects into external reality.

A post shared by Transcendant Gallery (@transcendantartists) on Jun 5, 2017 at 9:58pm PDT

Ham Jin attracted nationwide attention with his bright, fingernail-sized clay replicas of everyday objects while still a student in the late 1990s. The artist continues to stick to themes of miniatures and invisibility, but has injected a bit of darkness into his works. Restricting his material to black polymer clay, the artist’s recent works are subdued, minimalist and abstract. But upon closer inspection, one can discern intricate human faces and New York City buildings emerging out of the unidentifiable black matter of his art. His astonishing attention to detail represents the existence of hidden truths in society and the unseen sufferings of the world.

Recently featured the Korean Pavilion at the Venice Biennale 2017, Lee Wan is an emerging artist known for expressing, with artistic and aesthetic quality, the post-colonial timeliness that is often forsaken by contemporary society. Through his works, Lee questions underlying social stereotypes and conventions, aiming to disrupt such societal inclinations. His “Proper Time: Though the Dreams Revolve with the Moon,” for example, is an installation of 668 clocks, each inscribed with the name, date of birth, nationality, and occupation of individuals the artist met and interviewed, and demonstrates the widely differing economic circumstances of working people around the world.

A view of Lee Wan's works at 'Counterbalance: The Stone and the Mountain', Korean Pavilion, Venice Biennale 2017 (on view until Nov.26) #leewan #koreanpavilion #venicebiennale2017 #313artproject

Utilizing only colored wool and ultraviolet light, Jeongmoon Choi creates hypnotizing, other-worldly room installations. The criss-crossing fields of flawlessly constructed three-dimensional lines toy with perspective, light and illusion in a way that ink and paint cannot, thus creating a unique interaction with audiences. As a result, his works transform just about any room or environment into an immersive, geometric environment.