The 10 Must-Try Street Foods In Seoul 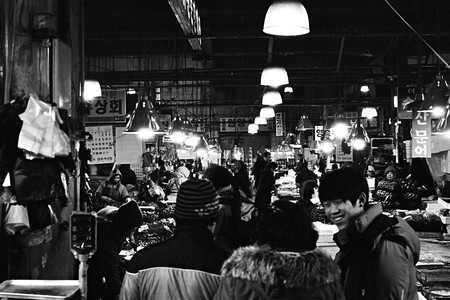 A Street in Seoul | © jedydjah/Flickr

Often being referred to as a food paradise, Korea is unquestionably one of the best destinations for street food in the world, attracting people with its flavors and scents. Take a look at the following guide to discover the 10 must-try dishes while you are in Seoul.

With a countless number of chicken skewer stalls scattered around the nation, dakkochi is a popular on-the-go snack among teenagers. Korean spicy chicken skewers are grilled with spring onion, giving a tender, soft and juicy BBQ flavor. They are served with a variety of sauces, so that diners can control the degree of spiciness. 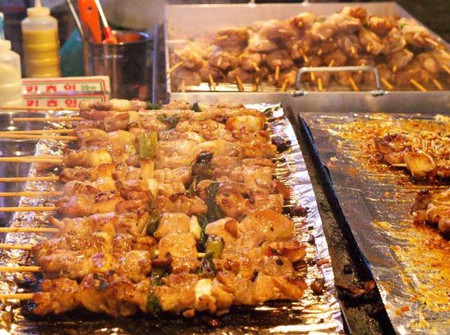 During the preparation of this snack, a whole potato is sliced into a giant spiral and skewered evenly on either a wooden stick or a sausage. After being deep fried, it is then sprinkled with cheese, chilli and other favourings, sometimes it is dipped in sauce tool, resulting in a crunchy and salty taste similar to potato chips. Aside from the delicious flavors, it is a catchy prop for photo taking. 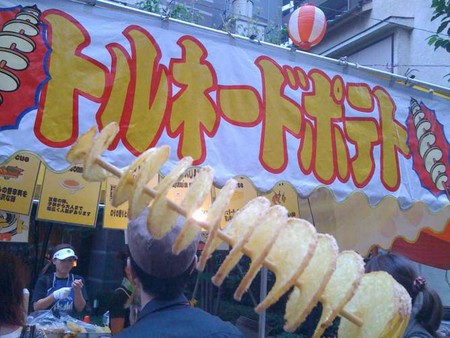 Nicknamed ‘Korean sushi’, kimbap is the most recognizable Korean snack outside of Korea. A sheet of crispy seaweed coating a steamed rice roll stuffed with pickled veggies, slices of egg, ham and topped with toasted sesame seed is an excellent afternoon snack to boost your energy level. Kimbap sold in moving carts are wrapped in plastic to keep them moist and soft. 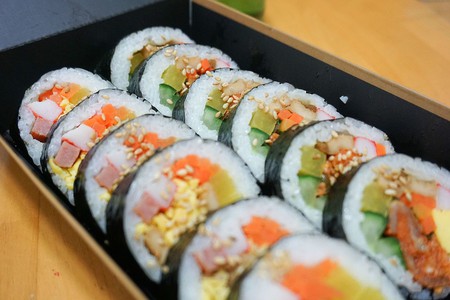 Bungeoppang, a goldfish-shaped waffle stuffed with red bean filling, is a real favourite of Korean youth. Crispy on the outside and gooey on the inside, this snack attracts numerous tourists and locals with its curious appearance too. Bungeoppang nowadays has become much more flexible: apart from ordinary red bean paste, other options like cream and custard are available. 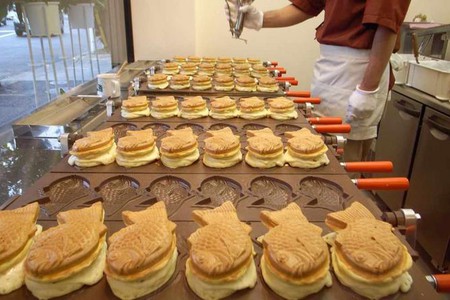 This authentic snack dating back to the Joseon dynasty is another contender to be the most famous Korean dish outside of Korea. Every tourist raves and hypes about having one. The braised dish of rice cake is spiced up with sweet red chilli sauce, served with fish cakes, boiled egg and meat and is finished with roasted sesames on the top. Delicious. 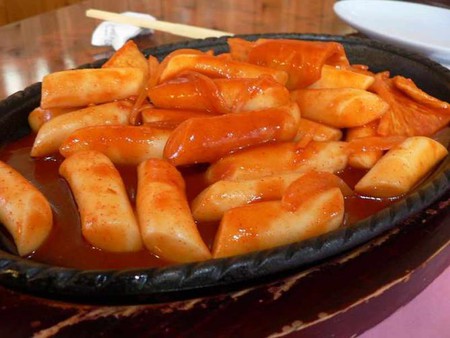 Visitors looking for tasty street food are often scared away by the nasty brownish veneer of beondegi. Meaning ‘chrysali’ or ‘pupa’ in Korean, the most repulsive and stinky snack in Korea is made by steaming and simple seasoning, emitting a rancid smell onto the street. It may require some effort to dig out the carts selling this snack, but there is likely to be one near the amusement park. This is a must try item for adventurous travellers looking for bizarre food. 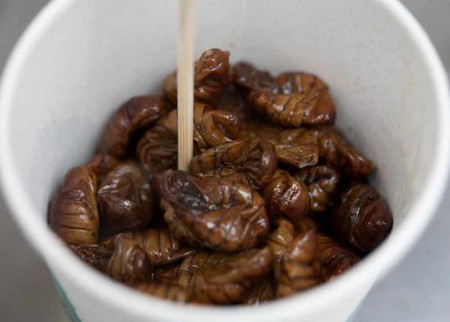 Although the hot dog is certainly not a staple of Korean street food, the French fry corn dog is something of a mystery appearance. A combination of crispy French fries, tender bread and delicious sausage is baked in an oven until it turns golden brown. Similar to French fries, the famous snack matches well with ketchup. 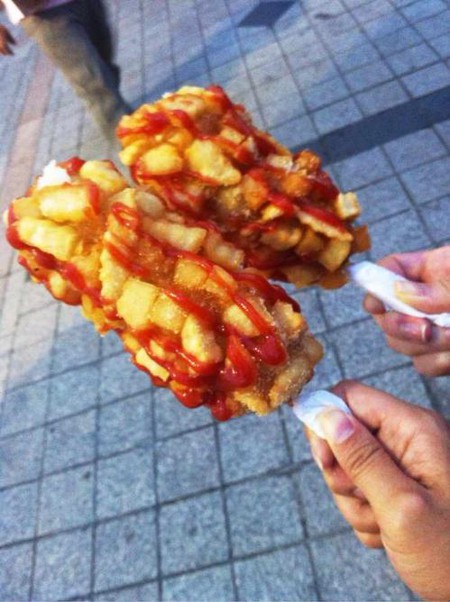 Literally translated to ‘blood sausage’, sundae consists of a mixture of coagulated pigs blood, cellophane noodles, barley, and sometimes perilla leaves, scallions, fermented soybean paste, glutinous rice, kimchi and soybean sprouts coated in pig or cow intestine and prepared by steaming or boiling. In some food stalls, sundae comes with a few slices of liver or lung on the side. Sundae lovers can pay a visit to Sundae Town, located in Sillim-dong, Seoul, where a wide variety of Sundae is offered.

Combining the words long and waffle, foodies can easily guess how this savoury street snack flies among the younger generation. Skewered with a wooden stick, the crunchy and sweet waffle baked to perfect golden yellow is topped with whipping cream, colourful chocolates and different sauces. This tasty snack is simply not to be missed.

Mandu can be categorized into two streams, the steamed and the fried (the former is called jjinmandu and the latter is named mulmandu). To many travellers, Korean dumplings look similar to dumplings offered in neighbouring countries like China, Japan and Mongolia, but the filling is actually completely different. A mix of minced meat, tofu and spices such as green onions, garlic and ginger are stuffed into the tiny ball and served alongside kimchi and dipping sauce. 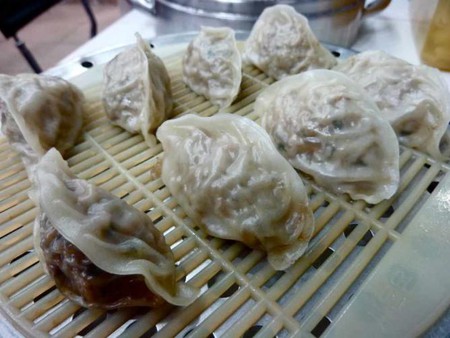