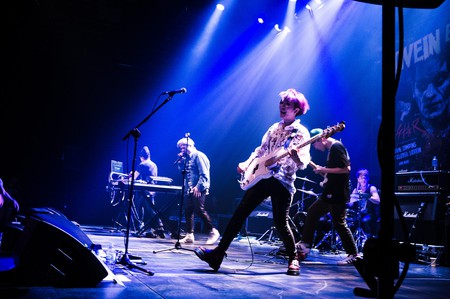 Slick dance routines, shiny hair and high-production hits – think Korean music and it’s likely that the first thing to come to mind will be the uber-commercial, cultural juggernaut that is K-pop. Delve into the music scene of this fascinating country, however, and you’ll soon realise that there is much more to Korean music than its megastar global ambassadors. Here’s a taste of some of Korea’s best alternative musicians.

Lim Yoo-jin, aka Neon Bunny, is a singer-songwriter and producer who creates dreamy electro-pop. Having cut her teeth in indie rock band The Black Skirts, she debuted her solo career in 2011 with the album Seoulight, making her one of the more established musicians on the Korean indie music scene. Surreal lyrics meld with soft synthesiser melodies for a laid-back, late-night vibe.

If you watched the closing ceremony of the 2018 Winter Olympics, held in Pyeongchang, you would have seen Jambinai perform — it was a surprise move from the event organisers, who were expected to focus more on K-pop. Rooted in post-rock, Jambinai combine progressive metal with Korean traditional instruments, creating their own unique sound.

Singer Rad Museum creates mellow, harmonically playful R&B and soul. Retro beats and dreamy electronic sounds give tracks such as Woman a nostalgic, summery feel. New on the scene, his first EP was released in 2017, but he’s already toured to locations such as Toronto and London, supporting musicians such as the more established offonoff (see below).

Dark, deep hip-hop from masters of their craft, GroovyRoom are Gyujeong Park and Hwimin Lee, a music producer duo signed to H1GHR Music (founded by Korean-American rapper Jay Park), who work closely with label-mates including Sik-K, pH-1 and Suran to create some of the best hip-hop coming out of Seoul today.

An experienced player on the Korean indie scene, ASEUL debuted in 2012 under the name Yukari. Following a change of direction in 2016, she came back under the moniker ASEUL with the punchy synth-pop album New Pop. Multi-layered and melodic, her music cocoons the listener in a neon-lit soundscape. Like her name, ASEUL constantly reinvents and redefines her music, allowing herself to evolve as a musician and produce continually exciting work.

Offonoff are a hip-hop duo made up of producer 0channel and vocalist Colde. Both are also members of underground hip-hop crew Club Eskimo. Relaxed hip-hop beats are infused with wavy, electro-fusion sounds with a laid-back, slightly trippy vibe.

Here’s your summer soundtrack. Singer-songwriter OOHYO is known for her dreamy, sunshiney, synth-pop indie. With a wide overseas fan base (including Japan and China), she has an international outlook, and has lived in South Korea, the US and the UK. Her influences include Elton John, Phoenix and Blossom Dearie, and she’s a fan of fellow Seoulite Neon Bunny.

A modern take on ’90s techno, Love x Stereo‘s sound is often stripped back and always rhythmically impeccable. The electro duo is made up of singer and synth player Annie Ko, and lead guitarist and producer Toby Hwang. Together they make smoky, danceable music infused by the free spirit of Californian rock. Special mention goes to Annie Ko’s wonderful range of vocal sounds.