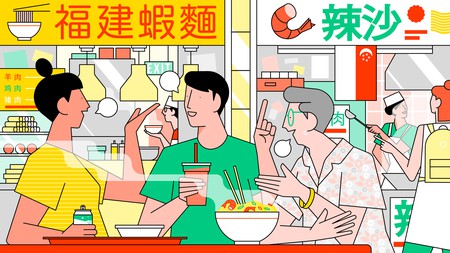 Delicious, affordable hawker food, cultural diversity, and an underdog economic success story are just some of the things that Singaporeans feel proud of. Here, six locals share what they love about Singapore, a tiny nation state that has ballooned into a prosperous world power in just over 50 years.

“Ask any Singaporean where to get the best Hokkien mee or satay, and chances are you’ll get a different answer from each one,” says Wah De Kai, a 23-year-old student who is home for a two-week holiday and desperate for Hokkien mee. And not just any Hokkien mee either.

“Every Singaporean has their own specific hawker stall in a specific food centre that they always go to for whichever dish it is they’re craving.” And for Wah, the only place to get Hokkien mee – vermicelli noodles fried with eggs, prawns, squid, sliced pork belly and satay sauce – is from Ah Hock Fried Hokkien Noodles from Chomp Chomp Food Centre.

There are more than a hundred hawker food centres like Chomp Chomp around Singapore. And each of these are home to multiple stalls that usually specialise in one local dish. But unlike many other food centres in Asia, a ‘local dish’ here can span a few thousand miles, with flavours hailing from China, Malaysia, India and Southeast Asia.

“[This] exciting mish-mash is what makes [Singaporean food] so irresistible,” Wah says, sitting alongside his two friends, Sharil Bin Tengku Abdul Kadir, who is of Malay descent, and Joshua Sandosham, who is of mixed ethnicity.

Tengku concurs, adding that Singapore’s cuisine is a reflection of its cultural diversity. “Singapore started out as a trading port, bringing people of all races, ethnicities and religions to the island,” says Tengku. “This confluence of different cultures, and how harmoniously we all live together, is what makes Singapore so special.”

“We can express our unique ethnic and religious identities freely,” adds Sandosham, whose father is Indian-Eurasian and whose mother is Chinese. “These days, there are more mixed marriages too, so the concept of race and ethnicity is becoming increasingly fluid.” While most people who grew up on the island would now identify as Singaporean, it hasn’t always been the case.

Singapore gained independence from the British in 1963, then from Malaysia in 1965. During this transitionary period, life was very different – as Mr Allan Tan and his sister, Madam Linda Tan, who both grew up during this time, can attest.

“Singapore was a chaotic place,” says Mr Tan. “In the ‘60s and ‘70s, secret society gangs were rife, and the streets could be a dangerous place.” In 1964, a year that was particularly frought with political dischord, there were race riots between the Chinese and Malays which resulted in 23 deaths.

“But Lee Kuan Yew helped clean up the streets and promoted racial harmony,” Mr Tan claims. “From a poor little village, we’ve become a world-class city in less than 60 years,” he says, sipping a condensed milk tea in Heap Seng Leong, Singapore’s oldest coffee shop – a luxury that would have been unthinkable when he was growing up.

“We were so poor back then, we had no money to go the public pools,” Mr Tan remembers. “When it was hot, we would go swimming in the Whampoa River.” Fun back then usually involved toys that they’d constructed themselves or games they’d concocted on their own. “We played marbles, flew homemade kites, or went into the fields to catch spiders in matchboxes.”

Madam Tan, who is now the principal of a pre-school, concurs. “Meat and soft drinks were expensive, so we only got to enjoy them once a year on Chinese New Year,” she says. During this time, their mother would give them gifts of new pyjamas that she’d sewn herself.

But despite their poverty, Madam Tan thoroughly enjoyed her childhood. “Things were less stressful back then. We didn’t have to strive so hard to do well academically, or work at high-pressure jobs.”

“Sometimes I feel sorry for the younger generation. They have to study and work so hard,” Madam Tan opines. “They have less time to enjoy their childhood the way we did,” she says, glancing towards her son, Jerome Lim, a 34-year-old museum curator, who agrees that Singaporeans today are more ambitious than their parents and grandparents.

“There’s a term called kiasu – meaning ‘afraid of losing’ in the Hokkien dialect,” Lim explains. “Because of our kiasu-ness, we’re often afraid of missing out, or having less than our peers. So we all work extremely hard, sometimes too hard, to attain all the things that we believe make a good life.”

Mr. Tan however, believes that kiasu-ism isn’t necessarily a bad thing. “Our early leaders like Lee Kuan Yew didn’t want Singapore to lose its chance for success as an independent nation, so perhaps being kiasu is one of the reasons we’re so tenacious and determined,” he says.

Wah voices similar sentiments about Singapore’s unlikely economic success story. “We are so little and don’t have any natural resources, so we were never meant to succeed,” he says. “But we have.”

Indeed, such national pride runs high in Singapore, and patriotism peaks at the annual National Day Parade, which takes place on 9 August. “I have watched the National Day Parade every year,” Lim asserts. During the festivities, families usually gather around the TV to watch the fireworks and marching bands, nattering in some combination of English, Chinese, Hokkien, Tamil and Malay – sometimes even all of them, in typically Singaporean fashion.