What's on in Singapore in May 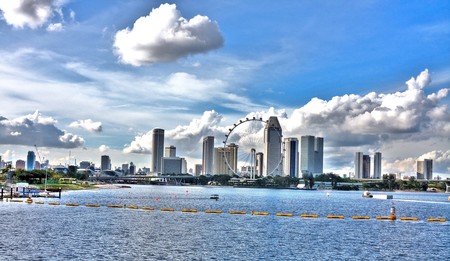 Fitness enthusiasts should be looking forward to May in Singapore, which will see inaugural versions of several athletics events. Concert goers will also be happy this month as 2017 continues to be Singapore’s best year yet for seeing international bands.

FESTIVAL | Get Your Geek on at the Star Wars Festival

May kicks off with a three-day festival that will see Star Wars taking over the Supertree Grove at Gardens by the Bay. The SuperTrees will be decorated to look like lightsabres, there will be nightly sound and light shows and even visits from Chewbacca and Kylo Ren. The weekend ends with the inaugural Star Wars run, where participants can choose whether they want to run for the Light Side or the Dark side in a competitive 10K or fun run 4.5K.

Admission: Free for the festival at Gardens by the Bay, fees for the Star Wars run

Join Kitty Wu as the independent music label celebrates their ten-year anniversary. On May 5th, they’ve got Oxford Rock Trio This Town Needs Guns (TTNG), bringing their brand of math rock to perform technically jaw-dropping jams. They’ll be supported by American guitar impresario Mylets. On Saturday May 6th they’ve got a full line up with some of the most impressive alternative acts in Singapore, including Forests (pictured), Amateur Takes Control and more.

Run Free is a run that is FREE for all. It breaks through the perception that taking part in a run costs money. Run Free adopts a No-Frills Concept, allowing every runner to participate for free, with the option to take part in either the 5 or 10 kilometre categories. By offering the freedom to purchase only the add-ons you wish to enjoy, every dollar spent is used wisely.

Frontier Danceland’s mid-year production SIDES is back at the SOTA Studio Theatre, with an exciting triple bill featuring highly-anticipated works from Tung I-Fen (Taiwan), Adele Goh (Singapore) and Gabrielle Nankivell and Luke Smiles (Australia). SIDES 2017 brings to the stage a riveting line-up of enthralling performances, featuring the characteristic coalescence of diverse influences and styles that is the hallmark of Frontier Danceland.

SPORTS | Run For a Good Cause
📅 Saturday, May 13th

RunningHour 2017 is a unique running event. Runners have a choice of running 10K, 5K, 3.5K, but the unique element is that runners can opt to run blindfolded. The event hopes to promote inclusivity for people with special needs, as it’s the only race in Singapore where runners participate together. Runninghour 2017 offers free registration to participants with special needs.

FOOD | Treat Your Mum this Mother’s Day
📅 Sunday, May 14th

Treat the most important woman in your life this Mother’s Day, at the Mum Does it Best Brunch at The Rooftop Bar, 1919 Waterboat House. The restaurant has introduced a new tapas bar, which includes things like XO sauce Spanish Omelette with Confit Onion and Prawn Paste Chicken.

Check out Fitness Fest 2017, Singapore’s first-ever Fitness Festival at the Bayfront Event Space in front of Marina Bay Sands. The main programming at Fitness Fest will be the Fitness Concert, featuring mass workouts with fitness celebrities, including Casey Ho set to live DJs.

FESTIVAL | Learn About the Latest Tech
📅 Wednesday, May 17th-Thursday, May 18th

Tech in Asia brings together tech lovers from across Asia to meet with investors, learn about start-up culture and explore the Singapore tech industry.

FESTIVAL | Learn About a New Culture
📅 Saturday, May 20th-Sunday, May 21st

Singapore’s first Kristang Language Festival hopes to raise awareness about a language that has nearly disappeared. There are fewer than 100 speakers of this language, who are part of the Portuguese-Eurasian community in Singapore, although it was widely spoken across Singapore and Malacca until the 1930s.

MUSIC | Dance the Night Away with Crystal Castles
📅 Tuesday, May 23rd

Spend the night with Canadian electronic duo Crystal Castles as part of their Asia tour, to celebrate their fourth studio album. Playing their first gig in Singapore, expect fans to dance the night away.

French ’90s electronica band AIR play a show on our sunny shores to cap off the month. Band members Nicolas Godin and Jean-Benoît Dunckel have been one of the most influential electronica bands over the last few decades. One of their early breaks came from the 2000 film, “The Virgin Suicides”. Fans can expect the band to play a range of tracks from their discography.

COMEDY | Enjoy a Night of British Comedy
📅 Sunday, May 28th

Russel Howard, one of the UK’s most successful comedians, is bringing his worldwide tour to Kallang Theatre. One of his biggest tours yet, fans can expect a night of hilarious jokes.