Top 10 Things to Do in Lavender, Singapore 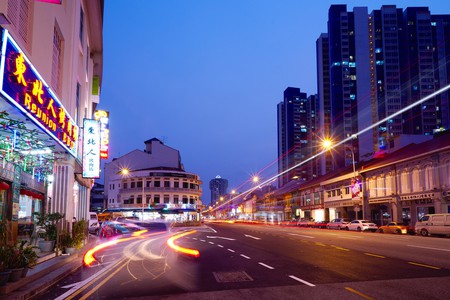 Lavender is the rising star of Singapore’s hip neighbourhoods, rivalling the likes of Tiong Bahru with its heady mix of old and new. Whether it’s ordering plates at old-school eateries, browsing contemporary art studios or wandering through charming heritage houses, Lavender provides things to do in spades.

Lavender district is comprised of the up and coming Jalan Besar, Kampong Glam and parts of Little India. This huge area is a mix of old and new Singapore, as shown in its long-standing eateries sitting side-by-side with hip music studios and trendy art spaces. Explore Singapore’s cool side and partake in the top 10 things to do in Lavender.

This hardware store turned hipster cafe is a favourite hangout of many who relish the uplifting aroma of good, strong coffee. True to its name, its spacious interior is decked in modern-industrial furnishings. The unique blends of coffee and a tantalising all-day breakfast menu on offer here makes it a serious competitor to many old-time coffee shops in the area – especially when you are hankering after Western delights like French toast or vegan scones. 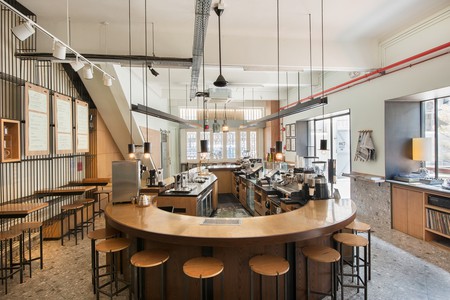 With its row of exquisite shophouses built in 1930 for businessman Mohammad Haji Omar, Petian road has an intriguing history. It was named after Henri-Philippe Pétain, a decorated World War I general who led France to victory against Germany in 1918. Unfortunately the man fell from grace when he collaborated with Nazi Germany after coming to power, resulting in his conviction of treason after World War II. The French community in Singapore naturally wanted his name removed from the road, but it didn’t happen due to administrative problems. Today, the road still stands with the name intact, highlighting the row of 18 double-storey Chinese Baroque townhouses. Now protected and conserved, they sit quaint and pretty with glazed ceramic tiles in a multitude of pastel colours. 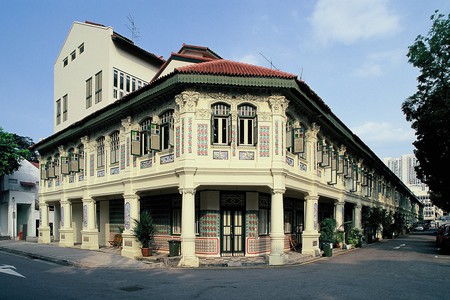 Like Tiong Bahru, gentrification has changed the face of a once gritty Lavender. Sleek, modern cafes have found a home here in recent years, as seen in the perfect example of Antoinette – a French-inspired cafe named after Marie-Antoinette, the last queen of France who was revered for her fine taste. Other than French classic desserts and savouries, this elegant cafe also attempts to recreate dainty pastries for Singaporean taste buds, like Orient – salted egg crémeux with lotus seed mousse, coconut cake, salted peanut sesame crispy praline. Definitely bursting with tropical flavours. 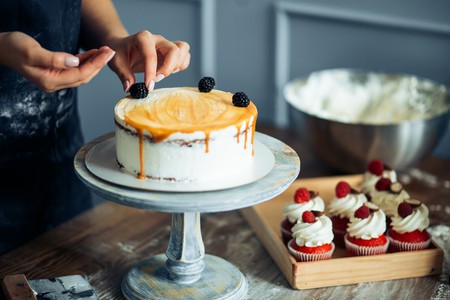 Pastry chef in the kitchen decorating a cake | © UfaBizPhoto / Shutterstock 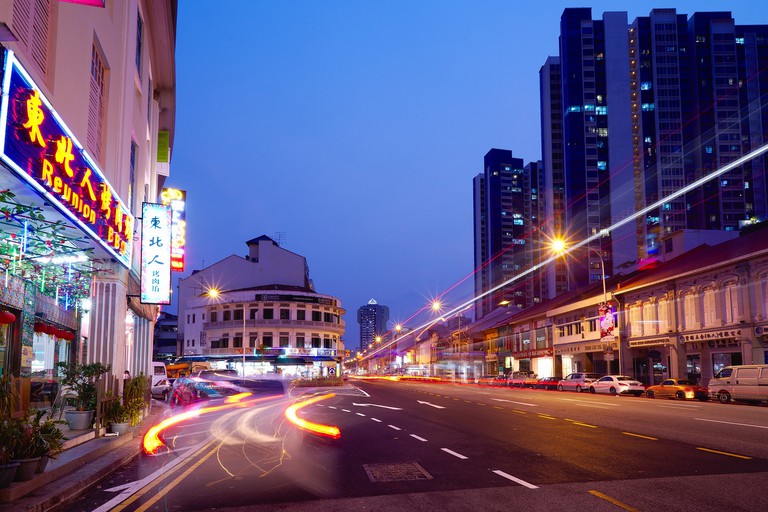 Kam Leng Hotel looks like the old Shanghainese flat featured in the Hong Kong movie In the Mood for Love, where actress Maggie Cheung sashays in and out of exquisite cheongsams. Founded in 1927, this Singapore hotel recalls that enchanting nostalgia and was restored in 2012 in an Art Deco style – sticking out like a proud, cherished antique on modern Jalan Besar Road. Walk into the lobby to see the nostalgic furnishings for yourself or take a picture of the exterior of the building as a memento of your visit.

City Square Mall used to be the site of Singapore’s historic New World Amusement Park from the 1920s to the 1960s – a world of candy floss and magical carousels for children, and a racy den of stripteases and cabaret shows for adults. Today, what sits in its place is an eco-mall home to some 200 retail, entertainment, lifestyle stores and restaurants. Gone are the sweet smells of candy floss and blinding neon lights – what remains is the iconic Lion Gate of this legendary park, and some serious shopping to be had at the mall that took its place. 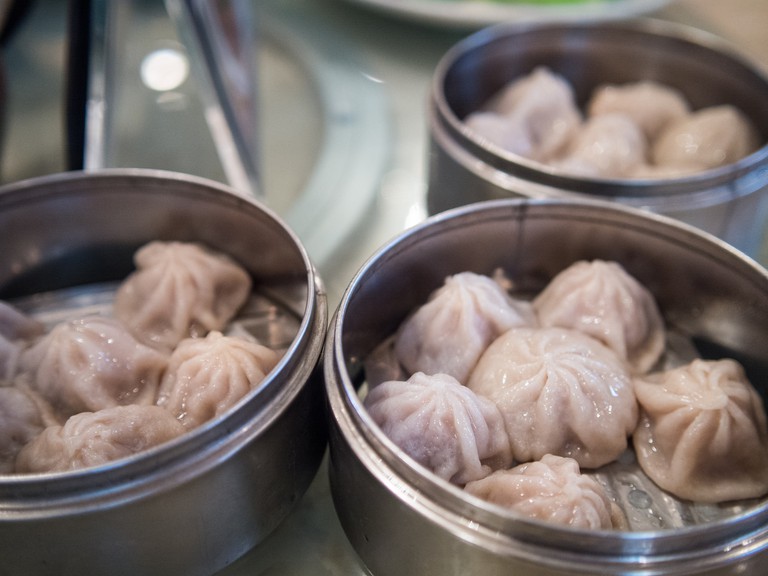 This dim sum restaurant, established in 1962, cooks up piping hot Cantonese delicacies in a typical kopitiam (coffee shop in Singapore) setting – no-frills and tiptop efficiency. And lucky for late-night stragglers, it’s open throughout the day and night until 6am in the morning. The restaurant will satisfy your hunger pangs for some juicy char siew pao (roasted pork buns), custard buns and xiaolongbao (soup dumplings).

Originally a Malay enclave in the 19th century, Kampong Glam retains much of its architectural heritage and cultural delights. What is especially notable is the gleaming Sultan Mosque, a renowned religious landmark in Singapore. The area also harbours the beautifully restored Malay Heritage Centre – once the royal seat of the Malay sultans in Singapore – where you can spend a half day uncovering the history of Singapore’s Malay community. 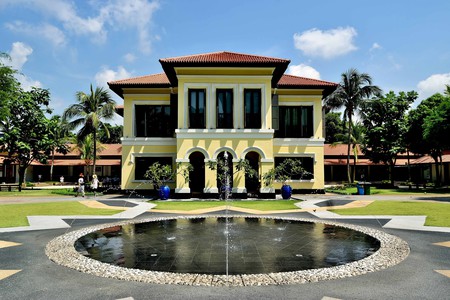 No visit to Singapore is complete without visiting a hawker centre, and Lavender has a really famous one to start your food exploration. Golden Mile Food Centre, which was opened in 1975 for the resettlement of street hawkers from Jalan Sultan, now houses hawker stalls that offer a variety of delicious local dishes such as char kway teow (stir-fried rice noodles), hokkien mee (fried prawn noodles) and chicken rice. Be warned: you might end up spending a whole afternoon here feasting on the cheap eats – and don’t forget to add the duck rice from Ah Xiao Teochew Braised Duck stall into your pig-out session. 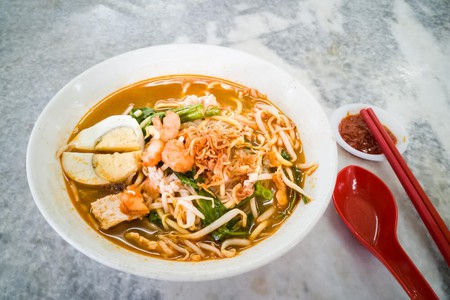 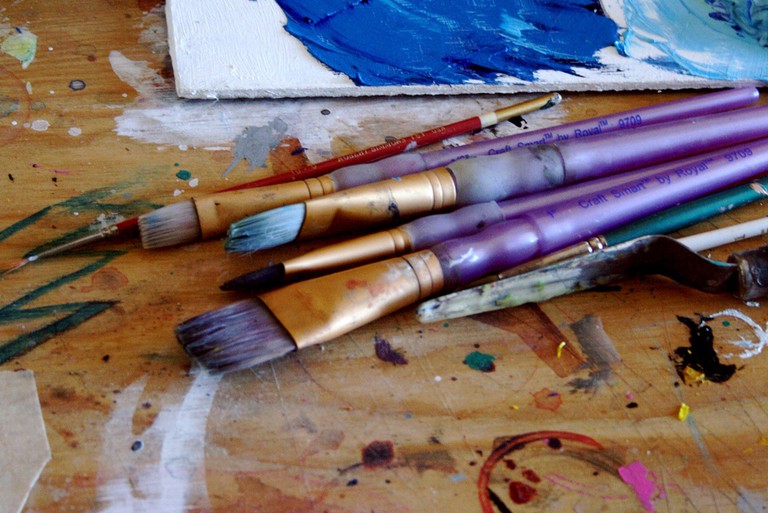 Paintbrushes and canvas on a table | © Redmond/Flickr

Fancy expressing yourself while making new friends? This independent art studio is built on the belief that ‘Art is for everyone’, hosting activities such as art jams and painting classes for children and adults. Let Lavender be your muse as you unleash your impressions of the neighbourhood onto the white canvas. The studio operates on an honour system. Oh, did we mention you can bring your own alcohol too?

This peaceful little Hindu temple adds to the colourful ethnic tapestry of Lavender with its ties to a minor Hindu community in the 19th century. The temple was built in 1888, and was very important to a Hindu community made up of employees of Kallang Gasworks, the company that fuelled the city’s gas lighting until electric lighting was adopted. Most of the workers live near Kallang River, and the temple – which began as a shrine to the Lord Siva – was a sanctuary for them to sustain their traditions and values. Today the temple is still used by devotees, and is best known for its elaborate entrance tower. 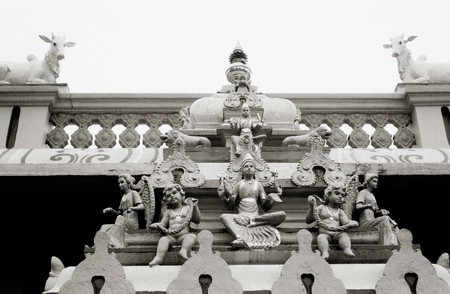