Speak Like A Local in Singapore: 10 Essential Singlish Phrases 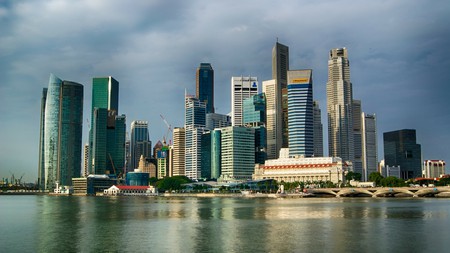 Singlish is a patois spoken by people who were raised in Singapore. It takes its influences from the city-state’s four official languages: English, Malay, Mandarin and Tamil. However, Singlish has had a bumpy history. For a long time, locals embraced it as an integral part of the Singaporean identity and showing clearly the city as multicultural, while the government felt that Singlish was harming Singapore’s image as the West would look down on those who failed to speak Standard English. The government started the Speak Good English movement in 2000 in an attempt to teach people how to speak properly and eradicate the use of Singlish but just this past May, the Oxford English Dictionary made the controversial decision to include nearly 20 Singlish terms in the newest version of the English language’s most definitive text. Here we’ve translated some key Singlish phrases so you can fit in with the locals.

This phrase derived from Hokkien dialect, ‘liak bo kiu’, and is used to indicate that the speaker does not understand what is being said. For example, someone may say ‘Can you speak slower and repeat your idea again, I catch no ball’. It does not work the other way though! If you tell someone that you ‘catch ball’, they will be very confused if you’re lucky, or laugh in your face if you are not so lucky.

This phrase is used to express that something is so amazing that the other person must try it, no matter what! For example, after going to a new restaurant your friend may call you and say ‘That restaurant makes the best assam laksa in Singapore, you die die must try’.

No, it’s not what you’re thinking, the etymology of this phrase comes from 18th century English phrase, ‘a cock and bull story’, used to describe obviously untrue stories. When used in Singlish, it is implying that the person who is speaking isn’t saying anything useful or that they are talking nonsense. However, the longer version of this phrase, ‘talk cock sing song’ means to get together with friends to catch up and gossip.

Print out in shop @ Bugis Junction #03-12C!
Can you literally even?
#talkcock

Originating in Hokkien, it translates to ‘red hair’. The term is generally used to refer to Caucasians of Western descent but can be used for Western expats in general. For example, ‘Clarke Quay is very popular with ang mohs’. If you’re in Singapore for any length of time, you will probably notice that there is a neighbourhood on the North East Line of the MRT named ‘Ang Mo Kio’. There are several theories behind this name, one of which is that a British family, the Windsors, had an estate near Upper Thomson in the 1920s. One day, their daughter went missing while playing near a bridge and after that the matriarch, Lady Jennifer Windsor went to the bridge every day hoping her daughter would be there.

Today's the last day of @naiise's pop-up at Orchard Central, so go check out their in-store discounts! If you can't make it down, there's still Westgate and their brand new concept pop-up at Wheelock Place (level 2). Seeya! #temasekclothings #naiise #thedesignsupermarket #naiisewheelock #naiisewestgate #randomangmoh

Derived from Malay, the original term meant ‘great’. This is one of the most common words you will hear in Singlish after ‘can’ and ‘lah’. It is used to express excitement or amazement, with something, often food, and can be used on its own or with other words to increase its intensity, like ‘So shiok!’.

Originating from kentang, the Malay word for ‘potato’, this is a derogatory term used to described Singaporeans that are deemed too Westernized. This is due to the fact that they can only speak in English or other foreign languages, however, they never learned to speak their mother tongues fluently.

Another Hokkien term, this one means ’embarrassed’. In Singlish, a speaker is more likely to use it after making a mistake because they feel embarrassed, so a better translation now would be that it means ‘sorry’, such as ‘Paiseh, I’m late because I thought we were meeting tomorrow’.

This Singlish term originates from the English word ‘sabotage’, however, the etymology of sabotage is based on the French, ‘sabot’, which meant poor quality work from a lazy or unskilled labourer. In Singlish, it targets someone to cause deliberate harm or try to get them in trouble. For example, a student may say to his friend, ‘Hey, don’t sabo me, please. I don’t want the teacher to ask me a question’.

A very popular phrase in Singapore’s highly competitive environment, this Hokkien term means that someone is afraid of losing out. Just as using the term ‘competitive’ to describe someone can have positive or negative meanings, ‘kiasu’ is often used to describe someone who is selfish and trying to get ahead of others. For example, someone may say ‘Tutoring is very popular in Singapore because of kiasu parents who want their children to get the top grades in school’.

Sotong is the Malay word for ‘squid’, and this phrase is used to describe someone who is slow at catching on or just generally clueless. It comes from the fact that squids use ink as a self-defense mechanism because the ink makes it hard for their predators to see and so their vision is blurred.