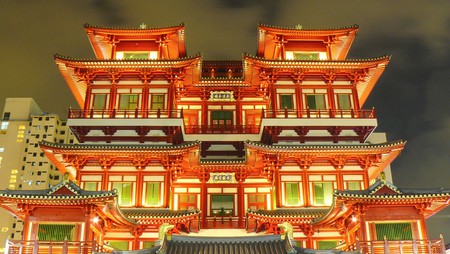 The Buddha Tooth Relic Temple and Museum is one of Singapore’s most popular tourist destinations and often included in lists of the most photogenic attractions around the island. Located in Chinatown, its popularity is certainly helped by its prime tourist location and proximity to Maxwell Hawker, another big draw for visitors.

Two decades later, the relic began its journey to Singapore when the Bandula Monastery reached out to the Venerable Shi Fa Zhao from the Golden Pagoda Temple in Singapore during a fundraising campaign. In 2002, the Venerable Cakkapala brought the relic to Singapore for an exhibition celebrating the Golden Pagoda Temple’s tenth anniversary. The exhibition was seen by 300,000 visitors over the duration of only a few days, leading the Venerable Cakkapala to donate the tooth relic to the Venerable Shi Fa Zhao and asking that a monastery worthy of the relic be built, so that more Buddhists could easily view and show their respects to it. 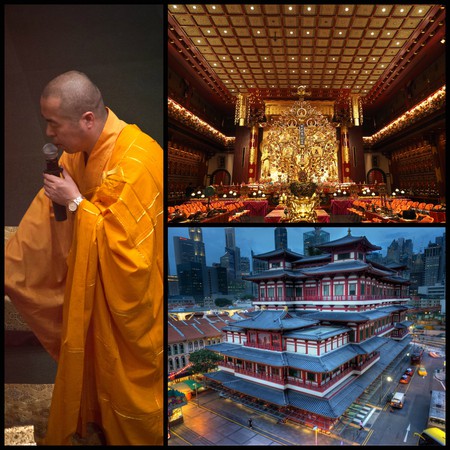 A year later, the Venerable Shi Fa Zhao submitted a proposal to the Singapore Tourism Board (STB) for the construction of the Buddha Tooth Relic Temple on the empty site at Sago Street. He proposed that the building’s shape reflect the mandala and, furthermore, that the temple should include a museum that displays Buddhist art from the Tang dynasty. With full support from the STB, construction started in January of 2005 and was completed two years later in 2007.

Just before opening in May 2007, the Buddha Tooth Relic Temple and Museum suddenly found itself the center of a conspiracy after the media questioned the authenticity of the relic. The media quoted forensic and dental experts, who found the dimensions of the tooth to be incongruous with human tooth patterns and more similar to those of a large animal. Ultimately, the Venerable Shi Fa Zhao refused to have his relic’s DNA tested and instead maintained the tenacity of his faith by saying, ‘Each of us has different views on what is ‘real,’ as it depends on each individual’s understanding of Buddhism.’

Photography tip for visiting: head into the stairwells of the nearby public housing building to get a better vantage point of the temple.