History Of Gardens By The Bay In 1 Minute 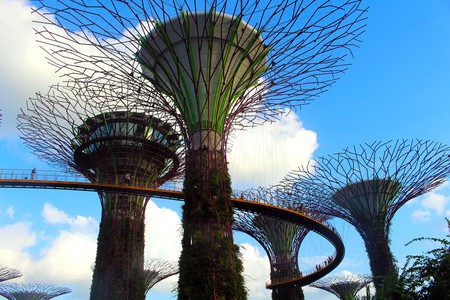 One of Singapore’s many nicknames is ‘The Garden City’ because of its abundance of parks and green space. However, the Singaporean government is not satisfied with this moniker. Instead, their goal is to be the ‘City in a Garden’ and one of the major projects that make up this initiative is the spectacular and surreal Gardens by the Bay.

First announced during the National Parade in 2005, the government received over 70 entries from its call for designs. Once a design was selected, the work started two years later and the park was officially opened to the public in 2012. Once completed, the park spanned 250 acres, all of which is on reclaimed land. Gardens by the Bay prides itself on its environmentalism and sustainability. This sustainability is possible due to the lake system, the conservatories, and the Supertree Grove.

The lake system is made up of two lakes: Dragonfly and Kingfisher. The lakes are an extension of the Marina Reservoir and the plants and aquatic reeds within the lake clean the water that comes in from the reservoir of sediments which is then used as part of the Gardens’ irrigation system. Furthermore, the aquatic plant life works towards reducing the nutrient load by minimizing nitrogen levels in the water. This helps to mitigate the growth of algae, which is key to maintaining higher water quality. Finally, the lakes are important for maintaining an aquatic ecosystem. The combination of a diverse range of plants, water circulation, and aeration helps to create and maintain habitats for fish and dragonflies. 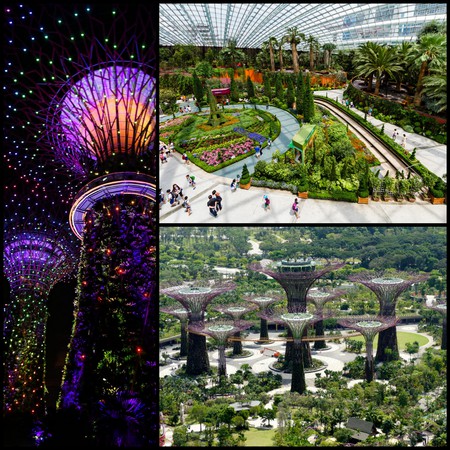 There are two conservatories in the Gardens, The Cloud Forest and The Flower Dome, both housed in glass biodomes. Each of the conservatories recreates different climates in order to showcase plants that would not otherwise be able to grow in the hot and humid climate of Singapore. The conservatories feature state-of-the-art engineering and technologies for efficient energy consumption and sustainable cooling methods. Finally, the Supertrees perform a significant role in the sustainability of the gardens. Some have panels on their canopies that harvest solar energy, which is then used at night for lighting up the Supergrove, whereas others are used as ventilation as part of the cooling system of the conservatories.