Historic Hotels in Singapore to Help You Travel Back in Time 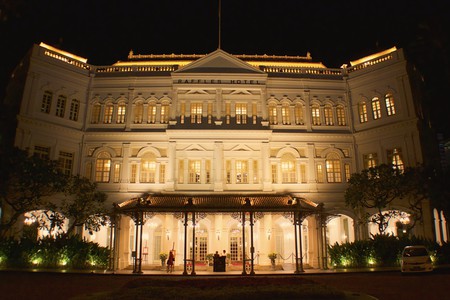 Singapore is seen as a very young country, having just celebrated its 50th birthday in 2015 but its history stretches way beyond. Sir Stamford Raffles, considered the founder of modern day Singapore, landed on the island’s sandy shores in the early 1800s and before that Singapura had a long history tied to its neighbour, Malaysia. Visit these hotels to feel like you’ve stepped into that past. 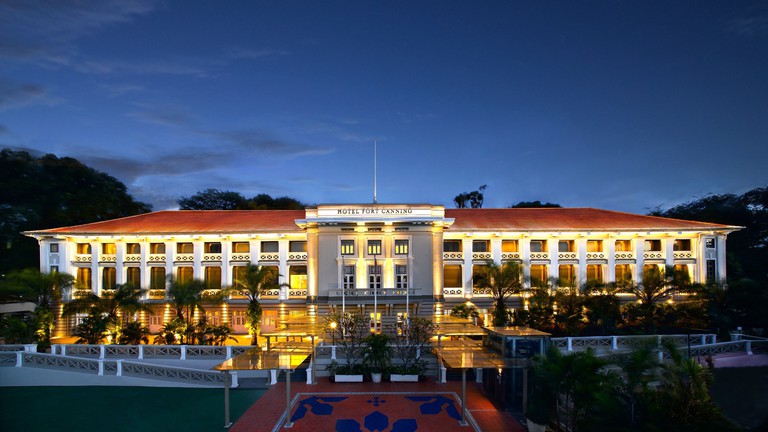 Hotel Fort Canning, Singapore | Courtesy of Hotel Fort Canning
View Rooms
The original Hotel Fort Canning was built in 1926 as the Administration Building for the headquarters of the British Far East Command. Located on Fort Canning Hill, both the hotel itself and the grounds will have you feeling like you’ve stepped back into the indulgent days of colonial history. The original building was the site of one of modern day Singapore’s most significant historical events, the surrender of Singapore to the Japanese in 1942. History buffs will love the Lobby Archaeological Pits which feature authentic artifacts dating as far back as the 14th century. These collections outline the history of Fort Canning, from pottery that would have been used by the Majapahit Kings up to the comparatively modern artifacts like porcelain and toys that would have belonged to the English families who lived there in the mid-1900s.
EVERYTHING YOU NEED TO KNOW

Fullerton Hotel | © Erwin Soo/WikiCommons
View Rooms
In 1919, the ambitious idea of constructing the Fullerton Building arose. It would be the largest building project ever undertaken in Singapore at the time and it would be five years before plans were approved and financed and a further four years of construction before the Fullerton Building opened in 1928. Like many colonial buildings in Singapore, it played a role in WWII. In this case, the building had been protected from being bombed and would serve as the headquarters of the Japanese Military Administration during the three-year occupation of Singapore. Today, while the exterior of The Fullerton Hotel has been preserved in all its colonial glory, the interiors of the hotel had been modernized and brought up to the standard of a luxurious five-star hotel.
EVERYTHING YOU NEED TO KNOW 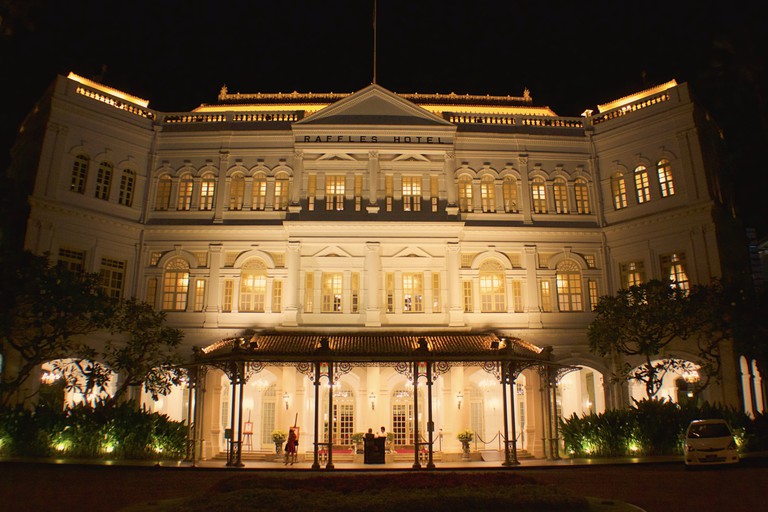 Raffles Hotel | © Moses O'Hara
Arguably Singapore’s most iconic historic hotel, the Raffles Hotel opened its doors in 1887, a beach front bungalow with just ten guest rooms. Over the next decade, several wings were added and by the turn of the century, there were 75 rooms. The hotel expanded further as it gained momentum for its opulence and famous guests until The Great Depression crashed down on then-owners The Sarkies Brothers, who were forced to declare bankruptcy in 1931. During WWII, the occupying Japanese troops renamed the hotel Syonan Ryokan meaning Light of the South. The Raffles Hotel has been careful to maintain its old-world charm through multiple extensive renovations and is still considered the best hotel in Singapore.
Open In Google Maps
1 Beach Road, Downtown Core, Singapore, 189673, Singapore
+6563371886
Visit Website
Give us feedback 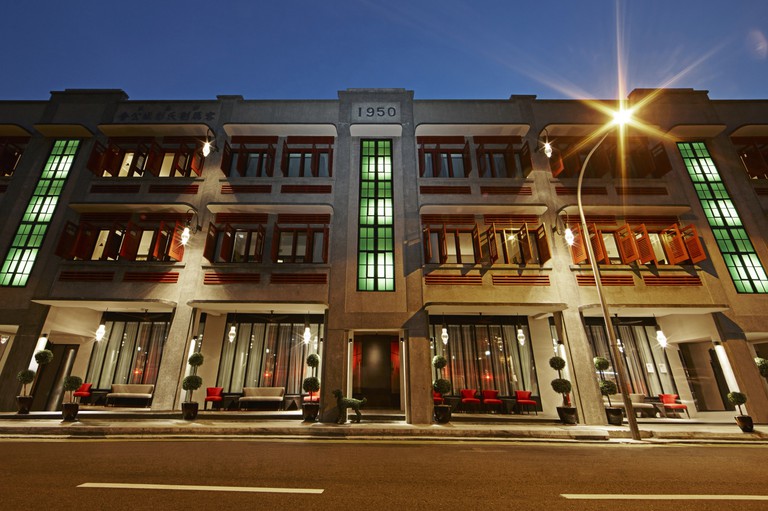 The Hotel Vagabond is not as old as some of the others on this list, but the artistic luxury boutique presents a different side of Singapore’s history. Located in a post-Art Deco building from the 1950s, The Hotel Vagabond feels like stepping into the past, but one that belongs to the likes of David Lynch. Stepping through the doors of a building that has been both an illegal brothel and workers’ dormitory, is a fascinating experience. The first hotel in Asia designed by Jacques Garcia, the lobby is full of discussion-worthy art installations. 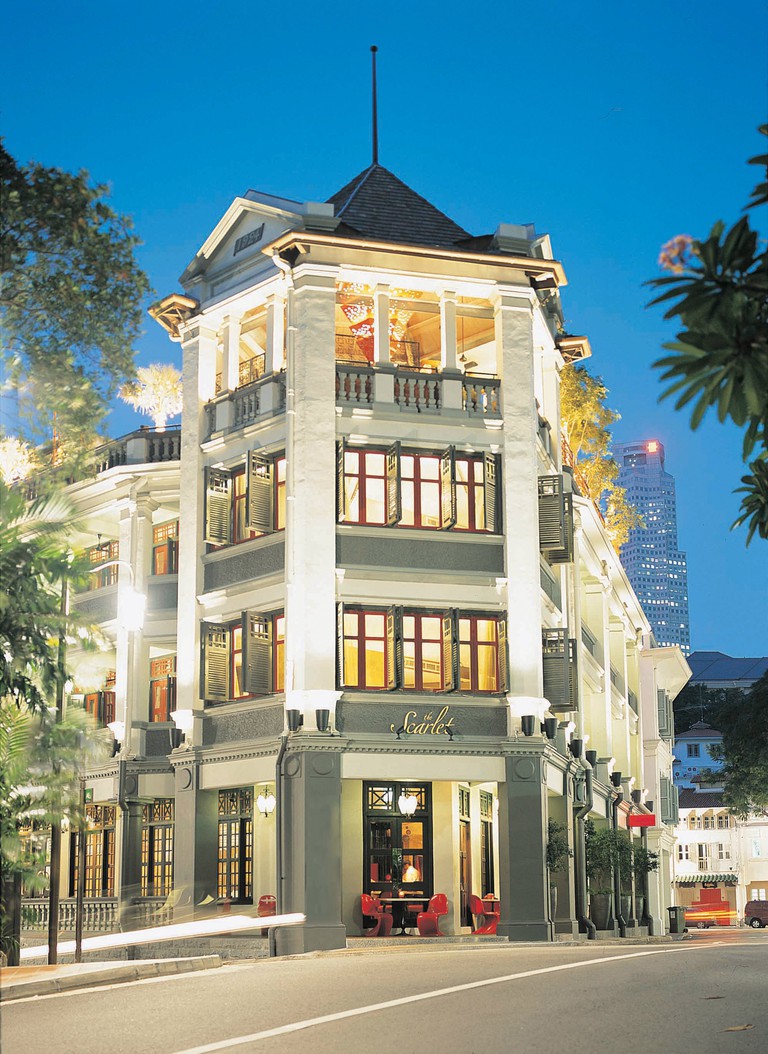 The Scarlet, Singapore | Courtesy of The Scarlet Singapore
View Rooms
The Scarlet Singapore is located in a row of two-storey shop-houses originally built nearly 150 years ago in 1868 and anchored by a classical 1924 Art Deco four-storey building. The shop-houses, once home to Chinese immigrants, have been immaculately restored while the hotel’s facilities underwent a significant face-lift and it was retrofitted with modern amenities. Even the decor transports you into the past with opulent splashes of gold and crimson.
EVERYTHING YOU NEED TO KNOW 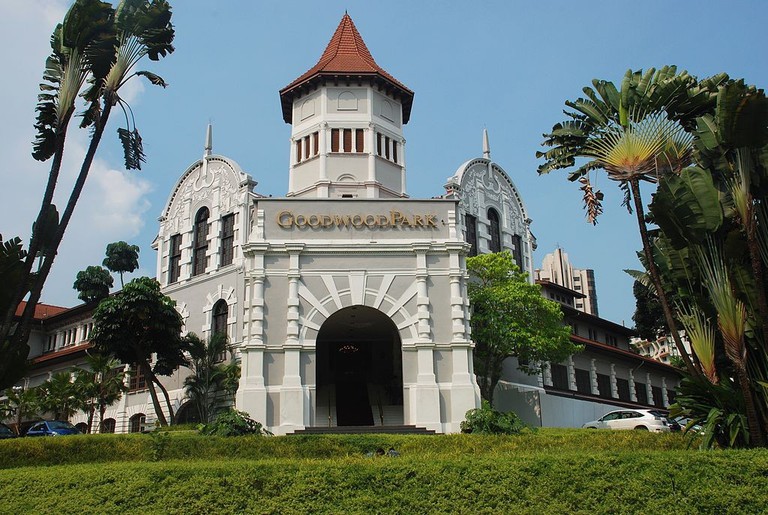 Built in 1900, The Goodwood Park Hotel has a very distinct look compared to other colonial-era buildings in Singapore because it was originally built for The Teutonia Club, exclusively for the Singapore expat German community and its architects took inspiration from the castles that dot the banks of the Rhine. The hotel has had a tumultuous history, at the outset of World War I, it was confiscated by the British. During the Japanese occupation, it was the official residence for high-ranking soldiers in the Japanese army and then following the war, the site of war crime trials. The hotel’s most striking feature is the tower block that even today stands out when approaching Orchard Road from Scotts Road – gazetted in 1989, the tower is listed as one of Singapore’s national monuments.