A Tour of Singapore's Filming Locations 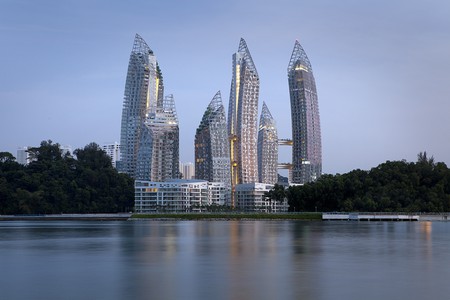 Singapore is still not a very popular filming destination, especially when compared with the rest of Southeast Asia – many directors head to the unique skyline of Hong Kong. Increasingly, however, Singapore is drawing the attention of filmmakers who see the city-state’s hypermodernity as the perfect backdrop to their narratives. Of course, not everyone is loving the Lion City’s skyscrapers and multiculturalism; Daniel Mark Millar, of British post-production house Molinare, said of Cold Feet: ‘They actually did shoot this in Singapore, but for some reason, they shot it in “Englishtown.”’ Here, in Singapore, we’re still scratching our heads about where that could be.

The Lion City’s stunning skyline was most recently seen in Independence Day: Resurgence. According to director Roland Emmerich, he chose Singapore as one of the cities that’s destroyed by the invading aliens in part because of its recognizable iconic landmarks, but certainly also because the city-state has such an impressive skyline.

Aleksander Bach filmed much of his science-fiction thriller Hitman: Agent 47, based on the Hitman video games, in Singapore. Although the film features many prominent landmarks, from the Esplanade Theatres on the Bay to Gardens by the Bay and the ArtScience Museum, one of the more memorable sequences was a car chase along Robinson Road, where the MPH bookstore and a lineup of blue Comfort taxis can be seen waiting impatiently.

One of the city’s most luxurious condo complexes, Reflections at Keppel Bay was among several Singaporean locations featured in Equals, a science-fiction romantic drama set in a dystopian future where emotions are controlled by the government. Thanks to the futuristic design of these apartments, they are perfectly suited as the setting of the film’s austere and hyper-controlled workplace. Equals also shot sequences at the Henderson Waves and the hardly recognisable Marina Barrage, pictured briefly 22 seconds into the trailer.

The history of Raffles Hotel, built in 1887, is inexorably tied to Singapore’s history. It’s rumoured Joseph Conrad once graced the Long Bar, the home of the ubiquitous Singapore Sling. The hotel was used as one of many film locations in David Bowie: Ricochet, video-chronicling the musician’s Serious Moonlight tour across Singapore, Thailand and Hong Kong. For a full rundown on places David Bowie visited, visit the detailed guide at SG Film Hunter. Raffles Hotel is also filmed on location in Rogue Trader, a 1999 biopic starring Ewan McGregor as Nick Leeson, the broker who led to the bankruptcy of Barings Bank.

One of the world’s most iconic and unique buildings, it’s surprising that Marina Bay Sands isn’t used more often in films. According to its website, the complex gets many requests though, so maybe it’s a deliberate choice. One film that did shine a spotlight on the Marina Bay Sands hotel was My Lucky Star, a Chinese-US rom-com that sees the characters whirl through some of Asia’s megacities, including Singapore, Hong Kong and Beijing.