6 Paintings You Must See At The National Gallery, Singapore 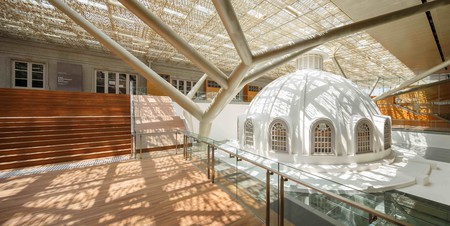 The National Gallery in Singapore is one of the newest visual arts institutions open to the public, showcasing the largest collection of modern art in Singapore and Southeast Asia. Located in City Hall, the newly refurbished old Supreme Court has been transformed into a beautiful amalgamation of modern and classical-inspired architecture. The building that’s seen Singapore through countless historical moments is the perfect space for such a monumental collection. If you don’t have the time to see everything the Gallery has to offer, we’ve condensed the best bits — but remember to go back to view the rest!

Recognize this painting? Perhaps you’ve seen it in your hand. Cheong’s Drying Salted Fish is one of the paintings on the back of the $50 note, depicting a group of Malay villagers processing and drying salted fish. Surrounded by lush foliage, overturned baskets and farm animals in a field, it is still a common sight around parts of Southeast Asia; an unbroken tradition carried up till the modern age. The painting was completed in Chinese ink and colour on cloth, rendered in the region’s unique Nanyang style, using a blend of Chinese and Western artistic traditions, of which Cheong was a pioneer. The warm tones and communal subject matter evokes a sense geniality, making this work unforgettable. 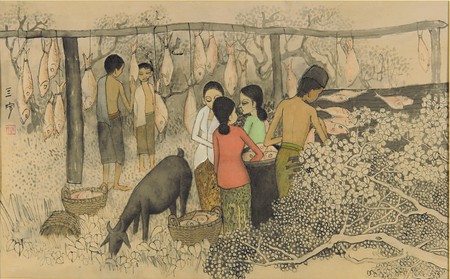 More than just a painting of a classroom, National Language Class highlights conflicts of identity and feelings of nationalistic fervor, embodied in the focus of a group of Chinese students learning Bahasa Melayu in a classroom. The painting was completedin 1959, the year Singapore was granted full self-government from British colonial rule. Basic questions are written across the chalkboard in Bahasa, probing the identity of the students and the national identity of viewers at the time. Chua is one of the pre-eminent Singaporean painters, and has won many distinguished awards including the Cultural Medallion in 2015. 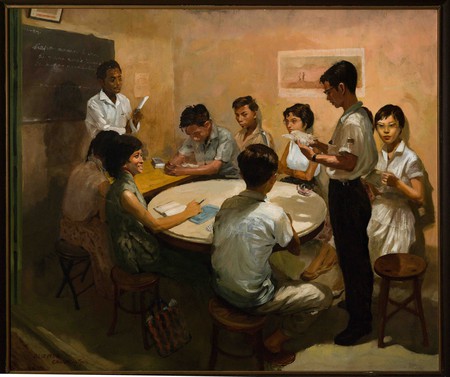 Life by the River takes you away from the hustle and bustle of the city centre and into the picture-perfect idyll of the Balinese countryside. Liu Kang captures the community of traditional kampung living, from the attap houses on stilts to the gathering of people on the banks of the river. Liu Kang went to Paris as a young man, and was influenced by fauvism and post-impressionism. The bold, bright areas of colour and staccato brushstrokes are telling of theParisian influence. Upon his return, he visited the Indonesian islands with fellow pioneering artists, including Chen Wen Hsi and Cheong Soo Pieng, to capture the tropics no longer found in developing Singapore.

Georgette Chen was a major contributor to the growth of the Nanyang style in Singapore. Having studied and lived in Paris for the formative years of her life, Chen’s works show characteristically impressionist features rendered in an Asian hand. Her first husband, and the subject of this and many other paintings, was an integral part of her early life. In this portrait, he is seen on a rattan chair, with a book in hand, staring into the distance. A point of interest is her signature — written vertically downwards much like Chinese characters would be. As a tribute to Chen, the Gallery commissioned a docu-drama, entitled The Worlds of Georgette Chen, as a window into her life and the Singapore known in the1950s. 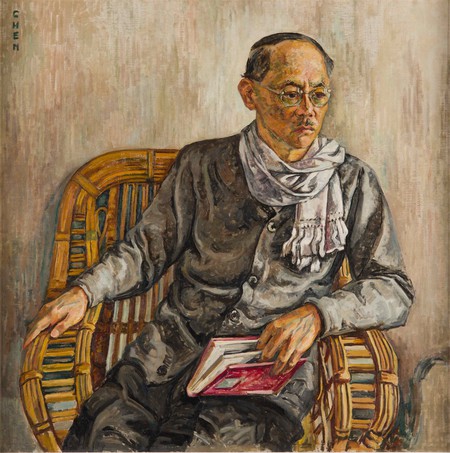 This poignant black and white photograph depicts a man in solitude, working on the side of a house. The photograph was taken during a period of political and social unrest. The stark contrast between the jagged hem of the unfinished paint job and the cacophony of debris with the concentration and serenity of the man on his (by modern-day standards) shoddy ladder, gives the photograph a sense of tenderness. Chua’s realist photograph harks back to a time perhaps only familiar to the older generation, but yet still resonates with present-day audiences. 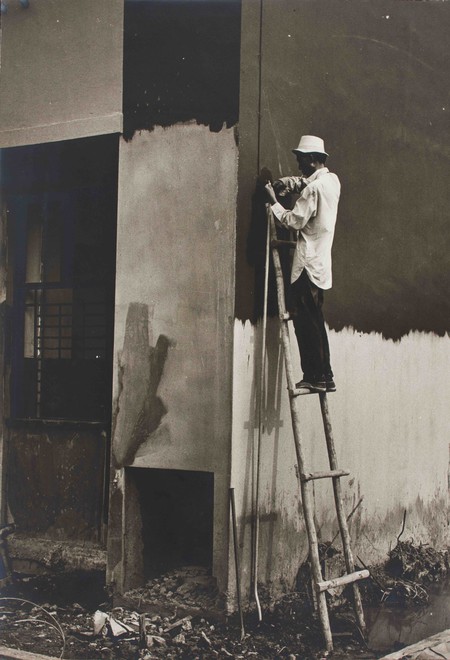 This imposing monochrome painting stands out amongst the crowd of works with organic subject matter. Poon was a forerunner of the modernist art movement in Singapore, and was one of the most successful Optical Art artists here at the time. Starting out at the Nanyang Academy of Fine Arts, he studied under Cheong Soo Pieng before leaving to further his studies in the dynamic London arts scene. He experimented with various styles before landing on Op Art. Each of his pieces were meticulously planned and systematically executed, evident from the precision of Black and White.