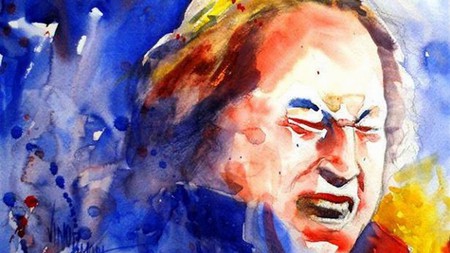 An Artists Creative Tribute To The Legendary Singer | © Mohsinism/WikiCommons

An extraordinary voice, which experimented with tempo, improvised with voice range and could perform for several hours with the gentle movement of hands that underscored a melody and transported the listeners to a world without boundaries. This was the soulful voice of legendary Sufi singer Ustad Nusrat Fateh Ali Khan, who inspired artists and audiences alike for many years.

Birth of an Artist

Born on October 13, 1948, in Faisalabad (then Lyallpur), Pakistan, into a family of accomplished singers and musicians, who carried the 700-year-old Qawwali tradition and passed it down through successive generations, Nusrat Fateh Ali Khan was naturally inclined to take Qawwali as his career path from an early age. However, his father, Fateh Ali Khan, wanted his son to become a doctor or an engineer, which was considered more respectable in society. But his father finally gave in to his son’s growing interest and started his musical education.

His father passed away in 1964, leaving his uncles, Mubarak Ali Khan and Salamat Ali Khan, to complete his musical training. He was only 16 when he gave his first performance, 40 days after his father’s death, at the graveyard, paying respect to the funeral ceremony of his father. In 1971, Nusrat Fateh Ali Khan became the official leader of the family Qawwali party, following the death of his uncle, Mubarak Ali Khan.

In 1985, Khan performed at the World of Music, Arts and Dance (WOMAD) festival in London. His fame spread far and wide, and he then toured throughout Europe, Japan, and New York. The Western artists were in shock and awe at the sheer brilliance of his raw voice. He showed versatility as an artist. On one hand, he could enthrall the audience with his powerful rhythms and creative improvisations for hours, and on the other hand, he could vocalize his creations within the Western and popular rhythmic frameworks.

In the 1990s, he contributed to the soundtracks of several popular international, Pakistani and Indian films. He teamed with Peter Gabriel in 1988 for the soundtrack of Martin Scorsese’s The Last Temptation of Christ and with Canadian musician Michael Brook on the albums Mustt Mustt (1990) and Night Song (1996).

These collaborations gave him the chance to blend Qawwalis with Western music. Khan also teamed with Pearl Jam’s lead singer, Eddie Vedder, in 1995 for the soundtrack of Dead Man Walking. These creative collaborations, tours, festivals and recordings were responsible for giving Asian music a breath of fresh air.

His first major hit in Pakistan was the song ‘Haq Ali Ali,’ which was performed in a traditional style and with traditional instruments. ‘Afreen Afreen,’ a music video featuring Lisa Ray, made Nusrat Fateh Ali Khan a household name in India.

His popular songs for Bollywood films include ‘Koi Jane Koi Na Jane,’ ‘Saya Bhi Saath Jab Chhod Jaye,’ and ‘Dulhe Ka Sehra.’ He also contributed to the Indian album Vande Mataram, which was released to celebrate the 50th anniversary of an independent India, by performing in the song ‘Gurus of Peace.’

Nusrat Fateh Ali Khan went on to become one the most important artists to introduce Qawwali to the world’s ears. Qawwali, the devotional music of the Sufis, meaning a philosophical expression, was considered to be a religious tradition only, but as Khan matured as a performer, he developed his unique style of Qawwali. Khan’s experimentation with tempo, mystical charisma, soulful improvisations, distinctive voice range and the intensity of his performances transfixed millions and spread his fame worldwide. He is rightly credited and widely referred as the ‘Shahenshah-e-Qawwali,’ meaning ‘The King of Kings of Qawwali.’

He received the UNESCO Music Prize in 1995 and the Grand Prix des Amériques at Montreal World Film Festival in 1996. He has been the recipient of many awards and honorary titles throughout his 25-year music career, spanning 150 albums and Grammy nominations. In August 2010, CNN named him as one of the most iconic musicians from the past 50 years.

Death of the Legend

Nusrat Fateh Ali Khan was married to Naheed, daughter of his uncle Salamat Ali Khan, and they had a daughter named Nida. His unique style of throwing up hands in the air while singing is a popular iconographic image that shows the euphoria one experiences while performing and listening to Qawwali.

His junoon for music and his passion for blending the spiritual with the contemporary soon made Qawwali transcend cultural and religious boundaries. Fans and fraternity across the universe mourned his sudden death on August 16, 1997, following a sudden cardiac arrest. His nephew, Rahat Fateh Ali Khan, is now carrying on his musical legacy and heritage.

‘A performer learns with experience and with age.’ The cherubic Sufi singer also remarked that ‘a man learns all his life, and dies the day he thinks that he has learnt everything.’

He educated his peers and fans to understand music as a rhythm and to also appreciate the poetry. He could sing for hours, improvising along, reaching a crescendo, and when he sang, it felt as if the voice came from his soul, not his throat.