Pakistani video artist Bani Abidi examines the correlations between power and society, and questions of national identity arising from the situation between Pakistan and India since their partition. Through historical and ‘everyday’ narratives, Abidi creates experimental video installations aiming at raising questions about the politics of cultural production in the subcontinent and how these political acts covertly influence daily life. 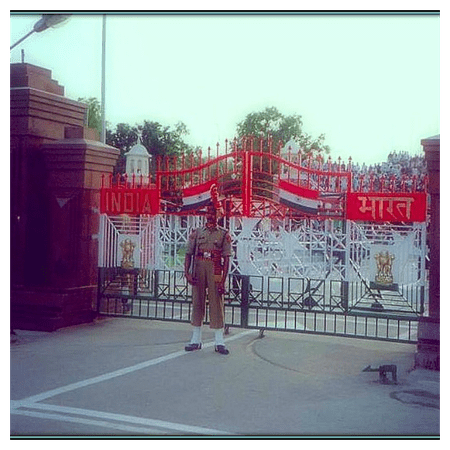 On the Border | © Sourav Das/Flickr

The media’s culpability in fractured identity; a nation’s idea of its own fabricated history; the experimental use of moving images to capture the seemingly interminable Pakistani-Indian bureaucratic conflict: these are some of the recurrent themes at the centre of Bani Abidi’s artworks. Through the medium of video, Abidi explores the multifaceted themes of authority and nationalism, and their impact on society, specifically surrounding Pakistani-Indian animosity since the partition of India in 1947.

Born in Pakistan, Abidi divides her life between Karachi, New Delhi and Berlin, where she now works. She began working with film during her studies at SAIC (School of the Art Institute of Chicago) and, as she stated in an interview with ArtNow – Pakistan, it quickly became the ideal vehicle for her creativity: “my interest in video, as I always state, lies in the aspect that is most essential to it, it unfolds over time. There is a difference between watching a still photograph or painting and watching a series of images and sounds that are played out sequentially. And hovering somewhere in my South Asian subconsciousness is an inclination towards narrative, and video suits that very well.” 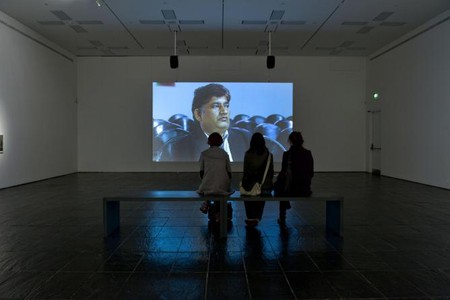 The Pakistani artist adopts documentary-style aesthetics in her videos, which are often accompanied by photographs, digital prints and performances. Despite referencing real situations and events, the scenarios portrayed in her short-films are imaginary and choreographed by the artist, Abidi does not deal with the topics of religion or ethnic identities but rather focuses on the emotional impact that politics and historical events have on people.
An exhibition in 2013 at Experimenter (Kolkata) Then It Was Moulded Anew comprised three projects previously displayed by the artist in various shows and galleries. The video ‘Death at a 30 Degree Angle’ and the photo installation ‘Proposal for a Man in the Sea’ are strongly linked together. ‘Death’ was shot in the outskirts of New Delhi in the studio of 87 year old sculptor Ram Sutar, renowned in India for his numerous statues and monuments of politicians and national icons (his most internationally known work is the bust of Mahatma Gandhi). The video is a fictional vignette of a minor politician obsessed over the way he should be immortalised for posterity. The tone here is satirical, the character’s indecisiveness about how his sculpture should look, to better represent his persona, hints at the futile attempt from local government officials to control and impress upon citizens and future generations their own historical importance. A true case, cited by the artist, is that of an Indian state minister, Mayawati, who went on to erect around 50 statues of herself and her Dalit family all over the state capital city.
‘Proposal for a Man in the Sea’came to lifewhile Abidi was scouting for locations for ‘Death at a 30 Degree Angle’. During this period, she met Ram Sutar and familiarised herself with his work. From the interviews with the Indian sculptor, emerged the accounts of a generation of people that directly experienced the struggle for independence of their countries and the role they played as promulgators of national ideologies and identities. These national sentiments however, struggle to survive in the subcontinent of today and so do the artworks of the players that once helped build the dreams of a newly born nation.
The third project approaches the theme of commemorations within military history in a rather peculiar yet intimate way. The photograph and object installation revolves around a fictional character who collects miniature war toys, a common hobby of army veterans. However, in Abidi’s work, this activity assumes almost a therapeutic value for her character, who is reacting to a specific historic conflict.
The branding of nations and the creations of myths surfacing from this body of work are clearly more a governmental and political’ objective rather than that of the citizens. This is a concept that the artist dealt with in one of her earlier videos, ‘The News’ (2001), a two-screen video of two mock news broadcasts, one from Pakistan and one from India. Both presenters deliver the same event but in different ways. Again, Abidi looks at the situation in a satirical way since the ‘news’ is in fact a slapstick joke about an Indian and a Pakistani. The artwork highlights the governments’ aim, through the media, to create a separation of identities between the two countries. The idea for this installation came directly from her own personal experience; Abidi is married to an Indian national and moved to New Delhi with him for a period of time, also, while studying in Chicago, she encountered many Pakistani and Indian people. These experiences made her realise that national fanaticism exists largely within the government and its policies, not through the actions and lives of common people. 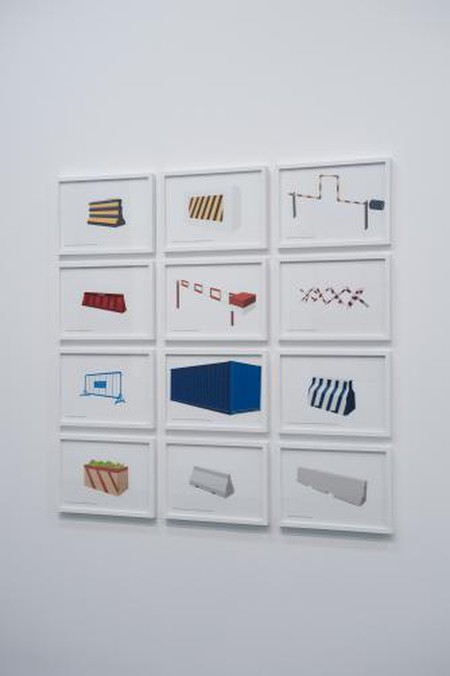 How impact of the state on people’s lives is explored in her video installation ‘Section Yellow’. The video and photographic works show the surreal and yet familiar situation of people applying for visas to cross borders. What attracted the artist to this project was the aesthetics that she envisioned for it. Based on real experiences, ‘Section Yellow’ is a faux documentary narrating, through gestures and sounds, the waiting process of people going to another country. Abidi recreates an outdoor waiting area in a parking lot in Islamabad where visa applicants queue within yellow lines, then go through a scanner gate, submit their documents before boarding on a bus that will take them to the diplomatic area. The artist decides to isolate and focus on the surrealism of the all process and of the place where this happens by comically exaggerating the postures and attitudes of the people involved.

As in much of Abidi’s work, the recurrent use of theatricality and humour underpins the ridiculousness and absurdity of power present in different layers of society.