In the hills of central Myanmar, the Intha – most of whom are Buddhist – live in a watery world, and their name translates as ‘sons of the lake’. They fish, make jewellery and grow vegetables on floating plots. However, they’re best known for a unique rowing style that sees them balance on one leg – and use the other to propel their slender wooden dugouts.

The Intha use leg-rowing to seek out fish such as carp, tilapia, featherbacks and snakehead, as well as for transport on Inle Lake and the surrounding waterways. 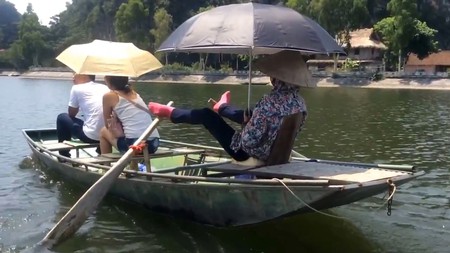 It’s an elegant and surreal sight. The fishermen balance on their back leg on the stern, with their front leg propelling the oar. The paddle might be held in one hand or leaned against the crook of the arm or shoulder and is braced against the back of the fishermen’s calf so that it can be lifted out of the water in a smooth semicircle before being driven powerfully back – pushing the boat at a surprising speed towards its destination.

This unique technique’s history dates back to the 12th century. Placid Inle Lake is spotted with water lilies, hyacinths and reeds, and the standing method allows fishermen (women generally row sitting down) to see over the vegetation. It also leaves a hand free to hold a net – the sight of a large rattan basket being manoeuvred by a boatman while on one leg in his narrow craft is hugely impressive.

Many of the younger Intha people are moving to the city, leaving leg-rowing’s future in doubt, while increased farming and development around Inle Lake is silting up some of its waters. But it’s still easy to see the art on a trip to this compelling corner of Myanmar. You can take a tour or go fishing in a traditional boat, and many restaurants are supplied by fishermen using the old techniques.

For a more unusual spectacle, come here during a festival. In late September, the Phaung Daw Oo Paya (a religious site) holds a fortnight-long event in which golden Buddha images are towed around the lake by traditional boats, and local villages compete in leg-rowing contests.