The 10 Best Restaurants In Astana, Kazakhstan

Astana, formerly known as Akmola, became the capital of Kazakhstan in 1997. Since then, the city has experienced a boom in restaurant openings, ranging from fine dining venues to quirky restaurants and cafes serving regional dishes. Here are ten places to dine out in while you’re here. 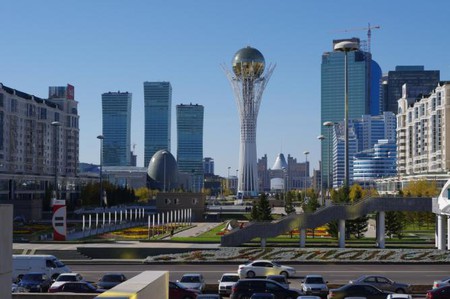 A recent newcomer to Astana’s restaurant scene, Marrone Rosso is one of the few European-style cafes and restaurants in the city. With a sister branch in Almaty, Marrone Rosso specializes in light meal options such as sandwiches, salads, and delicious pastries and cakes. The restaurant also offers a large variety of fresh coffees, ranging from simple cappuccinos to strong Turkish brews, a rarity in a country where almost everyone religiously drinks instant coffee.

Situated in the old city centre of Astana, Line Brew offers some of the best steaks in town, meaning a lot in a country where meat is part of every meal of the day. Line Brew specialises in modern European cuisine, while also offering traditional staples of Kazakh and Russian cuisine such as beef stroganoff, pork shashlik, mushroom julienne and beef tongue with horseradish. Menu highlights include beef on stone, a selection of raw cuts waiting to be fried by the guests on hot stone plates, and the horse meat steak with ‘Rose’ sauce, accompanied by a glass of Line Brew microbrewery beer. 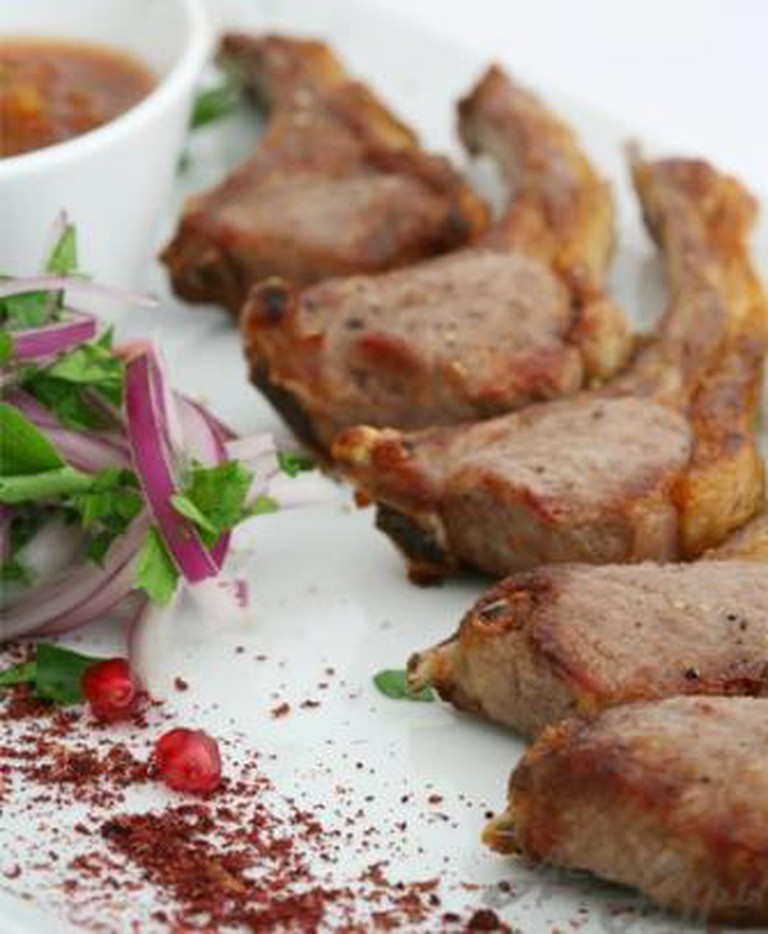 Beef dish | Courtesy Astana Nury
The kitsch and rather strange Epocha restaurant is essential to visit, especially if you’re staying in Astana on Friday and Saturday night. Decorated in the old Soviet style, the restaurant showcases an excellent collection of Soviet memorabilia, ranging from an old Soviet motorcycle on a dance floor to busts of Stalin and Lenin. The guests can even choose to eat traditional Kazakh and Russian cuisine in special dining rooms decorated as prison cells, where they are served by waiters and waitresses dressed in Soviet school uniforms and wearing the red neckties of the pioneer movement. On weekends, Epoha has live music, and the band plays an impressive range of cover versions, ranging from Ricky Martin to 1970s’ Soviet pop music.
Open In Google Maps
9 Shokan Valikhanov Street, Almaty District Nur-Sultan, 10000, Kazakhstan
+77172210157
Visit Website
Give us feedback

The elegant Barley restaurant is beautifully decorated with chandeliers, silver egg chairs, Buddha statues, old fashioned photographs and art pieces. It has two floors, with a stage for a live band and a dance floor situated on the first and a fine dining seating and lounge on the second. Here it serves up contemporary international and European cuisine, from juicy grills and steaks to fresh Thai salad, as well as several traditional Russian and Kazakh dishes. The restaurant also holds regular karaoke nights. 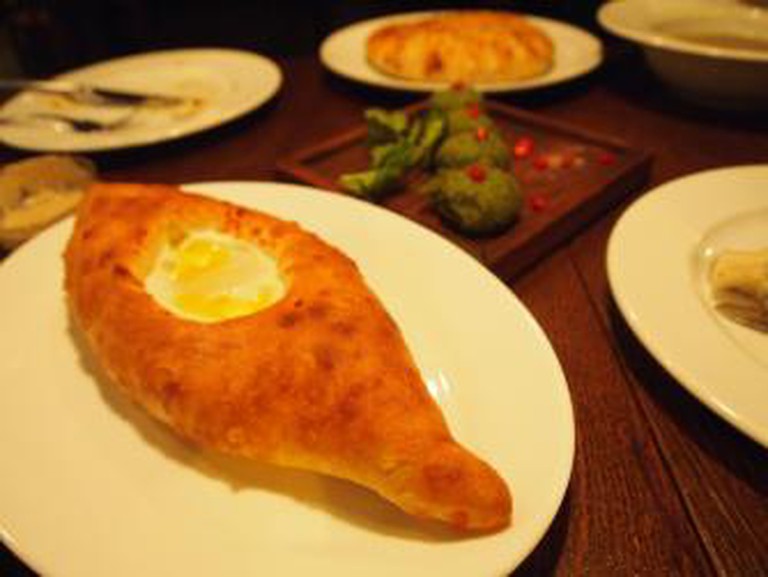 Khachapuri | © Salvagekat|Flickr
Located on the curve of the embankment of Ishim river in the old city, Ali Baba is a wonderful closed terrace restaurant, featuring traditional Kazakh, Caucasus and Russian food. It is beautifully decorated in nomadic style, and the classic seating in the middle of the terrace has several wooden huts, with low dining tables and pillows for seating.
Open In Google Maps
3 Bukeikhan Street, Сарыарқа ауданы Астана, 10000, Kazakhstan
+77172321899
Give us feedback

Restaurant, Georgian, $$$
Facebook
Email
Twitter
Pinterest
Copy link
Share
Map View
The lovely restaurant Tiflis is a real find, especially for those who are new to the delights of Georgian cuisine. Located in the old part of the town and situated on two floors, Tiflis specialises in traditional Georgian dishes, ranging from kharcho soup, made with beef, rice, plum tomatoes and walnuts, to pork and beef shashliks, accompanied by traditional Georgian red wine. The speciality of the restaurant, however, is khachapuri,traditional bread with fillings, ranging from cottage cheese to potato and egg.
Open In Google Maps
10 Amangeldi Imanov Street, Almaty District Nur-Sultan, 10000, Kazakhstan
+77172537033
Visit Website
Give us feedback

A fine-dining restaurant and meeting place for diplomats and Kazakh politicians, Cafe Star is a beautifully decorated restaurant featuring contemporary international cuisine, from European-style grills to Asian noodles and stir fries. The crystal chandeliers, mezzanine lounge and the velvet purple seating contribute to the ambience of a glamorous old-world bistro. 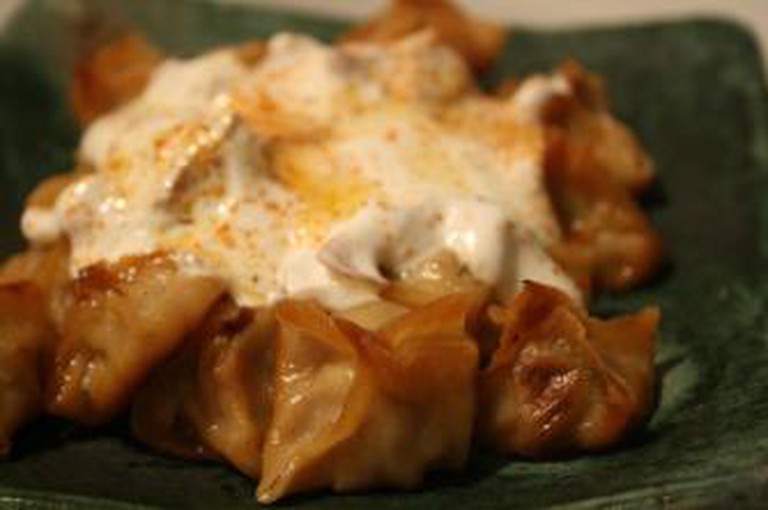 Manti | © thebittenword.com/Flickr
Alasha is one of the best Uzbek restaurants in the city and proudly displays different aspects of Uzbek culture. The restaurant itself was built to look like a Uzbek palace and there are traditional decorations inside, including carpets, pots and ceramic plates. The restaurant also hosts cultural shows with live music and traditional dances every night. To eat, guests can choose from a variety of different regional Uzbek plov, a rice dish, and order a shisha to relax with after the hearty meal.
Open In Google Maps
29 Turan Avenue, Yesil District Nur-Sultan, 10000, Kazakhstan
+77772069898
Give us feedback

Restaurant, Turkish, Vegetarian, Asian, $$$
Facebook
Email
Twitter
Pinterest
Copy link
Share
Map View
One of the few places to offer Uyghur cuisine in Astana, Turfan is a charming and always busy restaurant on the embankment of the Ishim river. The restaurant charms its guests with a lovely wooden décor, staff dressed in traditional Uyghur and Uzbek dress, and simple, yet delicious traditional Uyghur, Turkish and Uzbek dishes. These include hearty langhman, a broth of pulled noodles, beef and fresh vegetables, tasty manti, steamed dumpling with fillings that range from pumpkin to beef and pork, and Uzbek plov, a delicious and filling dish made with rice, beef, grated carrots, chickpeas, raisins, and onions.
Open In Google Maps
10 Azerbaijan Mambetov Street, Saryarka District Nur-Sultan, 20000, Kazakhstan
+77172390850
Visit Website
Give us feedback
Give us feedback