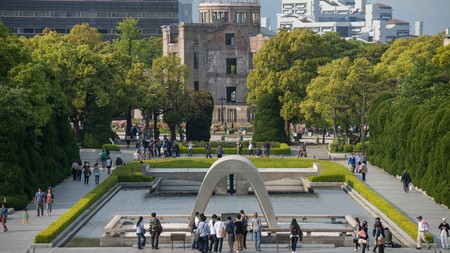 A tranquil green space between two rivers that was once the site of an unprecedented tragedy, Hiroshima Peace Memorial Park is an essential part of understanding Hiroshima City’s history. Here’s how to plan your visit.

From the end of the Edo era, the area that the Hiroshima Peace Memorial Park now occupies was a busy commercial district known as Nakajima where commercial goods were traded and transported to and from the adjacent Ōta River. When American forces dropped an atomic bomb on Hiroshima in August 1945, the area was completely decimated.

In 1949, the city of Hiroshima decided to convert the Nakajima area into a place of remembrance rather than rebuild it as it had been. The result was an expansive park covering 120,000 square metres (1.3 million square feet) that has been designed to encourage peaceful contemplation. Over the years, a series of memorials and monuments have been constructed dedicated to the people who lost their lives because of the bombing.

All of the park’s memorials are within walking distance from each other, so when visiting allow yourself time to stroll around and view them all, before taking some time to reflect ahead of continuing with the rest of the day’s activities.

A memorial ceremony is held in the Peace Memorial Park annually on 6 August to mark the day the atomic bomb was dropped, and to remember the victims of the bombing. This ceremony is followed by a lantern-floating event in the evening, which sees 10,000 coloured lanterns bearing peace prayers float down the city’s rivers.

Hiroshima’s Peace Memorial Museum is also located within the Peace Park and is one of the city’s most-visited attractions. The museum opened in 1955 with the purpose of communicating the reality of the atomic bombing and its effects on the world. Inside, there are audio guides available to rent that provide detailed explanations and commentary about the exhibits. On display are artefacts belonging to the victims, photographs of Hiroshima before and after the bombing and other exhibits demonstrating both the immediate impact of the bombing and its after-effects. 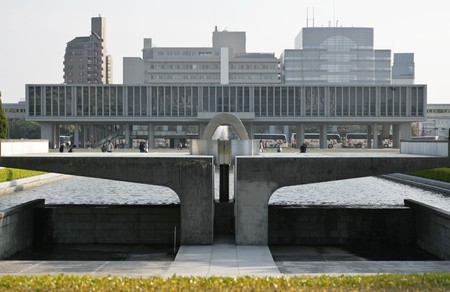 The Hiroshima Peace Memorial Museum has on display objects belonging to the victims, and pictures of the city before and after the bombing | © Teithiwr / Alamy Stock Photo

What to see in the Peace Memorial Park

The Peace Memorial Park is home to several sculptures and monuments dedicated to the people who lost their lives, either during the bombing or as a result of radiation exposure. These are some of the most popular sights – and the stories behind them.

Probably the city’s most recognisable sight, the Genbaku Dome, or A-Bomb Dome as it’s more commonly known, was designated a UNESCO World Heritage Site in 1996. The building, constructed in 1915, was originally used as a display hall for commercial products. Designed by Czech architect Jan Letzel, the dome was a rare example of European-style architecture in Japan at the time of its construction. Coupled with its scenic riverside location, the dome quickly became one of Hiroshima’s major landmarks.

When the atomic bomb was dropped in 1945 it exploded 160m (525ft) from the dome, setting the roof on fire and gutting the building. The ruins that can be seen today are all that remains. The A-Bomb Dome was one of the only buildings in the city to avoid complete destruction, and after the war ended the citizens of Hiroshima decided to keep the structure as a reminder of the events that took place 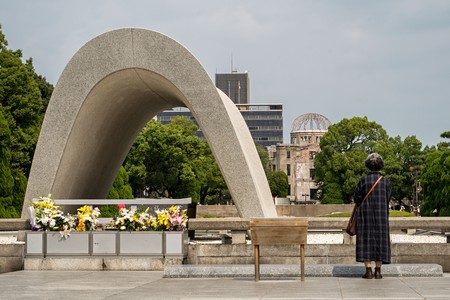 The Flame of Peace

After the bomb was dropped on Hiroshima, thousands of people died begging for water because of the fever and sickness they developed from the heat rays and fires that burned. The Flame of Peace sculpture serves as a memorial to those victims. This sculpture, designed by Kenzo Tange, represents two wrists joined together, and the two wings on each side represent two palms facing upwards towards the sky.

The flame at the top of the sculpture was lit in 1964 and is both a symbol of hope and a protest against the use of nuclear weapons. The peace flame will not be extinguished until the world is rid of all nuclear weapons. In 2016, Barack Obama became the first US president to visit Hiroshima since the bombing and gave a speech in front of the Flame of Peace alongside Japan’s Prime Minister Shinzo Abe. 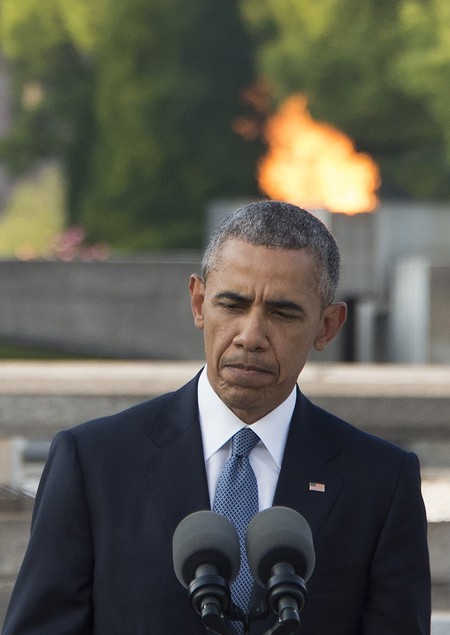 “Let all the souls here rest in peace, for we shall not repeat the evil” are the words engraved into the cenotaph for the victims of the atomic bomb in Hiroshima. Inside the empty tomb are registers containing the names of every single known victim of the bombing, regardless of nationality. The domed arch shape of the memorial is designed to shelter the souls of those names that rest inside from the rain, and new names are regularly added to the records each year. At present, there are more than 300,000 names listed within the hundreds of volumes.

This unusual five-tiered tower was built with funds donated by the families of students who died in the bombing. More than 8,000 students from local middle schools and high schools were ordered by the government to help with the war effort by working in Hiroshima’s factories, and many of them died in the bombing. This tower serves as a memorial to approximately 6,300 of these students who perished. 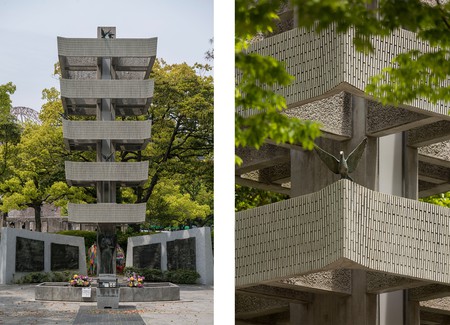 Sankichi Tōge, a young poet who was exposed to the radiation from the A-bomb at his home in Hiroshima City, became involved in the peace movement and an advocate for the abolition of nuclear weapons following World War II. Toge wrote a collection of poems about the nuclear bomb entitled Genbaku Shisu, which received international praise before he passed away in 1953 at the young age of 36. You’ll find the Sankichi Tōge Monument located near the park’s Peace Memorial Hall.

This monument was created to commemorate all the children who died in the atomic bombing. The idea for the monument came from a group of school children in Hiroshima who were shocked when one of their classmates, a girl called Sadako Sasaki, died from leukaemia 10 years after radiation exposure from the bomb. Before Sadako died, she spent her days folding hundreds of paper cranes after her father told her they had the power to grant wishes. 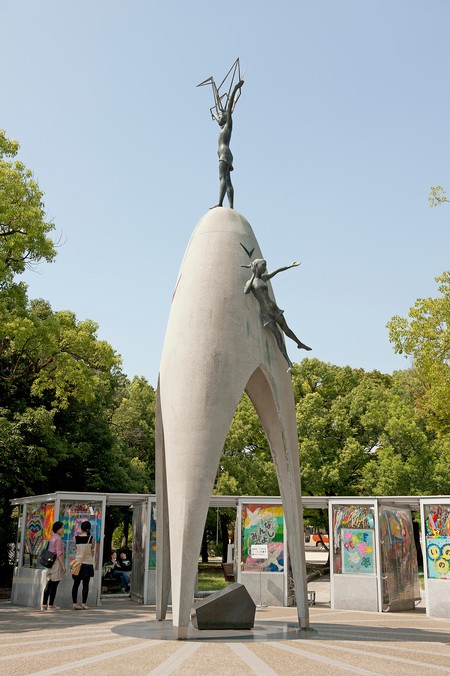 Gathering support from students across Japan and internationally, Sadako’s classmates were able to raise enough funds to create this bronze statue of a girl lifting a paper crane.

The Peace Bell was built in 1964 as a symbol of the anti-war movement and the campaign against nuclear weapons. The bell features a series of engravings, including a world map without any borders; Japanese symbols that represent the desire to abolish nuclear weapons; and a mirror to reflect those who ring the bell. The Peace Bell can be found by the park’s lotus flower pond, which features flowers planted in prayer for the bomb victims. 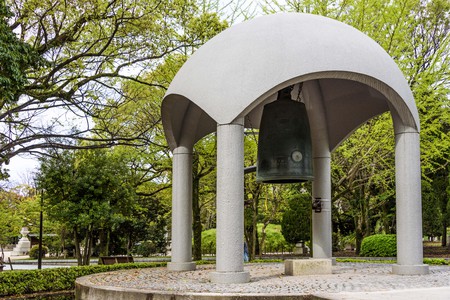 How to get to Hiroshima Peace Memorial Park

The Hiroshima Peace Memorial Park is easily accessed using the city’s tram system. Take tram line two or six from Hiroshima Station and get off at the Genbaku-Domu Mae stop by the A-Bomb Dome. Alternatively, take one of the sightseeing loop buses from Hiroshima station.