The Ultimate Guide to Hiroshima Castle 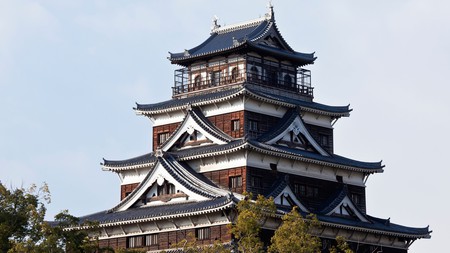 Before it was destroyed by the atomic bomb, Hiroshima Castle was a key military zone | © Horizon Images/Motion / Alamy Stock Photo

From its early days of warring samurai to today’s peaceful cherry blossom parties in its grounds, Hiroshima Castle has played an important role in Hiroshima since its groundbreaking ceremony in 1589. Learn why it’s known among locals by its nickname the “Carp Castle” and discover the history of this iconic landmark with Culture Trip’s ultimate guide to Hiroshima Castle.

Hiroshima Castle has a long and complex history dating back to the 16th century. More recently, one of its most significant roles was as an important military headquarters during World War II, before the original structure’s ultimate destruction in 1945, after US forces dropped the world’s first atomic bomb on Hiroshima.

The current reconstruction, which stands on the original site, was built during the 1950s. Visitors to the castle today can still discover the story of the castle’s origins and learn about both samurai culture and the castle’s role within Hiroshima through the permanent exhibitions housed there.

The origins of Hiroshima Castle

Hiroshima Castle was established in the 16th century by Mori Terumoto, a feudal lord at the time, and member of a powerful ruling group called the Council of Five Elders. Terumoto moved into the castle in 1591, before Japan’s unification, to govern several provinces, comprising Hiroshima, Shimane, Yamaguchi, and parts of Tottori and Okayama prefectures.

In 1600, after the Battle of Sekigahara, which led to Japan’s last shogunate, Terumoto was forced to retreat to Yamaguchi prefecture and a new lord, Fukushima Masanori, took up residence in Hiroshima Castle. However, Masanori lasted less than 20 years, as he was dismissed from the castle after failing to get permission from the Tokugawa shogunate for restoration work in 1619, following a flood that damaged the building.

The castle was then occupied by the Asano family, whose descendants remained there for 250 years, until the abolition of feudalism in Japan, when the building was utilised by the military. It became the Imperial Army Headquarters in 1894, during the Sino-Japanese War. 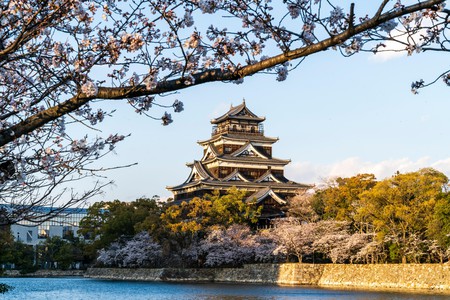 Before 1945, Hiroshima was considered to be one of Japan’s major military cities and the entire area around Hiroshima Castle became a restricted military zone around the time that the Sino-Japanese War started. It was only open to the public during special events, such as cherry blossom season. During World War II, the castle was used as a headquarters for the Japanese army, but it was left in ruins after the atomic bombing that flattened much of the city in 1945.

The reconstruction of Hiroshima Castle

The rebuilt Hiroshima Castle opened in 1958, and has served as a museum housing historic exhibitions and artefacts ever since. The castle’s main tower was restored and reconstructed using reinforced concrete rather than the original timber, but the ruins of some of the other buildings can also still be seen today. 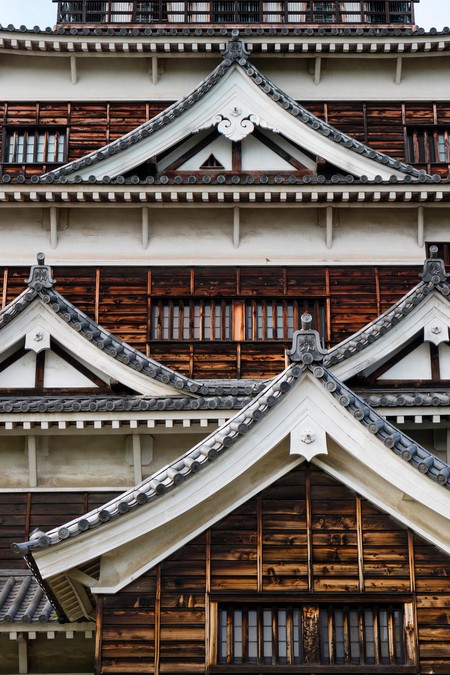 When is the best time to visit Hiroshima Castle?

Hiroshima Castle is open daily from 9am, but the best time to visit is the weekend, when visitors can catch one of the samurai performances that take place in the castle grounds. On Saturdays and public holidays, there is also a samurai parade from 1pm, while on Sundays at 1.30pm and 3pm samurai actors perform a live show featuring sword fights and ninjas.

Aside from the weekly samurai entertainment, Hiroshima Castle is one of the city’s most popular spots for viewing cherry blossom, thanks to the 450 cherry blossom trees that bloom every spring in the castle grounds. If you happen to be visiting Hiroshima during this time, be sure to pack a bento lunch box and participate in the hanami (flower viewing) festivities by setting up a picnic under the blossoms.

What to see at Hiroshima Castle

Hiroshima Castle’s inner moat is the only remaining one of three original moats that can be seen today. The two outer moats were gradually filled in over the years – in fact, commercial buildings and schools now occupy much of the original castle grounds. The remaining inner moat was designated a National Historic Site in 1953 and is also the location of Hiroshima’s annual food festival in October, which sees hundreds of food tents selling local produce from around the prefecture. The schools of koi seen swimming in the castle moat helped contribute to Hiroshima Castle’s nickname of Rijo, meaning Carp Castle. 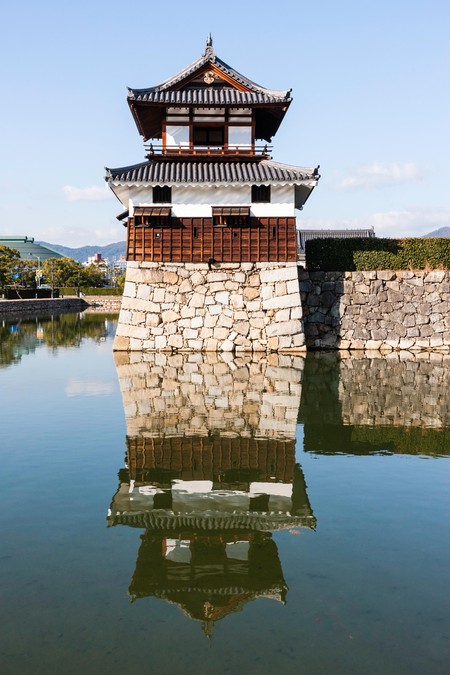 While most of the castle’s original structure was destroyed in the atomic bombing, there are several remaining ruins that visitors can still see today. These include the ruins of the east and south towers, the stone castle walls, the castle gate and the castle’s original foundation stones. Another point of interest is the Honmaru area, which was the central part of the original structure, serving first as the lord’s residence before the Japanese military used the castle as their general headquarters.

View the trees that survived the atomic bomb blast

Throughout the grounds of Hiroshima Castle, there are several trees – which are helpfully marked on the visitor’s map – that survived the atomic blast with minimal damage. This is particularly significant because all of the buildings that originally surrounded them, including Hiroshima Castle itself, were destroyed and burned to the ground. Somehow, these trees held out and are still flourishing today, despite being located less than one kilometre (0.6 miles) away from ground zero. 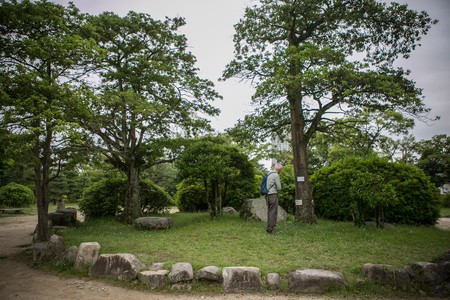 Check out the samurai armour

The third floor of Hiroshima Castle features an exhibition introducing samurai culture, with displays of samurai swords and weapons along with armour belonging to the former lords of the castle, known as yoroi in Japanese. These suits of armour consist of different components, including chest armour made from iron and leather plates, iron dome-shaped helmets called kabuto, and fierce-looking mengu face masks designed to intimidate enemies during battle. Located on the same floor is an experience corner where visitors can try on a selection of kimono and armour, making for an amusing photo opportunity.

The castle’s main gate and turrets were reconstructed during the early 1990s and visitors can explore the restored versions during their visit. The main gate is built in an architectural style called Yagura-mon, which became popular during Japan’s Edo period. The two-storey gatehouse served as a valuable defence point, along with the connected turrets. Look out for the Taiko Yagura turret, which is named after the taiko drum that can be seen on the second storey, used as a signalling system between samurai. 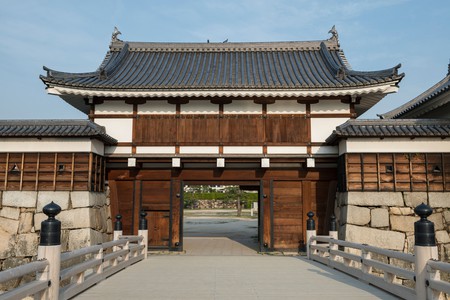 How to get to Hiroshima Castle

Hiroshima Castle can be easily accessed by streetcar and is a 10-minute walk from Kamiyacho-nishi or Kamiyacho-higashi stations. Alternatively, you can hop on the Hiroshima sightseeing bus, which has around three departures per hour from Hiroshima station. A visit to the castle can also be combined with the nearby Shukkeien Garden (10 minutes on foot), or the Peace Memorial Park (15 minutes on foot).

Climb to the observation platform

The top floor of Hiroshima Castle is used as a viewing platform, and provides views of the city’s most famous landmarks, such as the A-Bomb Dome and Peace Memorial Park, and on clear days you can see out to Miyajima Island. For a small charge, visitors can also look through the telescopes for better views of the surrounding area. 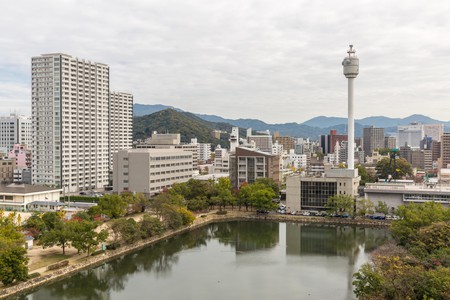