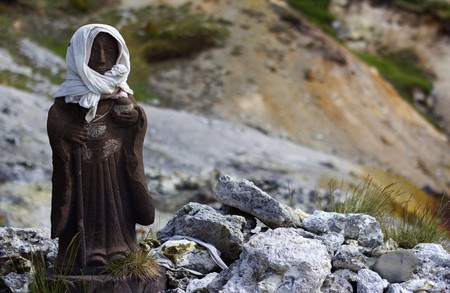 With its poisonous lakes, cold barren rocky landscape, hidden pit vipers, sulphur rich air and smoking bubbles that rise through the Earth’s surface, Osorezan (Mount Osore) is quite literally Hell on Earth. Find out more about this ‘gateway to the other world’ in Aomori Prefecture at the northern point of Japan.

Situated on the remote, axe like peninsula, of Shimokita, jutting out of Japan’s main island of Honshu is Mount Osore, a Buddhist temple and a place spoken of in folk tales as the closest thing to both Hell and Paradise on Earth. 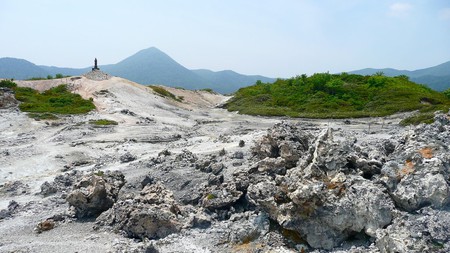 Discovered around 1000 years ago by a local Buddhist priest-monk Ennin, who was on a pilgrimage to uncover a sacred mountain that best resembled the world of Buddha, this mountainous region is one of the country’s most sacred sites and is believed by many to be one of the gates to the underworld. 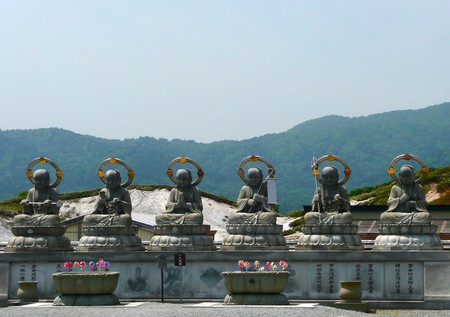 The air of Mount Osore (known to locals as Osore-zan) is thick with the stench of sulphur, a by-product of the many fumaroles (smoke holes) dotted across the ground. These ominous clouds warn visitors that the land is in fact still sitting on an active volcano, however this is just the beginning of Mount Osore’s eeriness. Known colloquially as ‘Fear Mountain’ it may not sound like the most inviting place, but its surreal natural beauty and rich history draws intrepid travellers from across the world, all on the hunt to unearth something that can only be described as otherworldly. 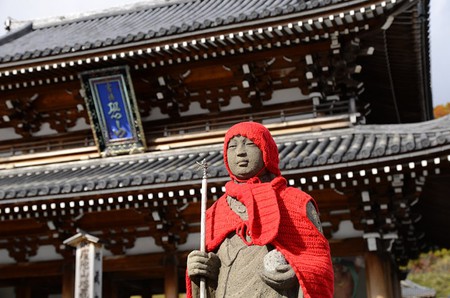 In Japanese folklore, Mount Osore has been called the entrance to the next life, mainly due to its uncanny resemblance to Buddhist descriptions of hell and paradise. The area is home to eight symbolic mountainous peaks, which surround Lake Usori, a lake that contains highly acidic waters. The waters that fill the lake are so poisonous that there’s only ever been one species of fish that’s managed to survive in them, the cold and grey Japanese dace. Another creature that calls the almost uninhabitable land home is the mamushi, a pit dwelling viper, and if you’re brave enough to set foot on Mount Osore you’ll be warned of their presence by the abundance of warning signs scattered across the grounds. 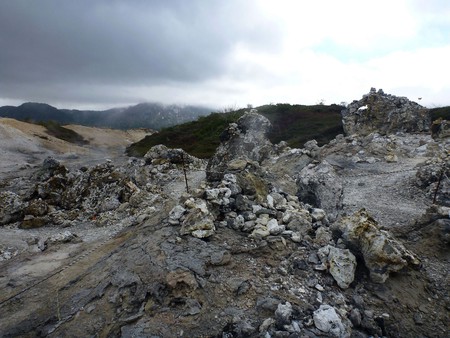 Beyond Lake Usori sits a river, known as Sanzu no Kawa, it’s known as the Japanese River Styx – a mythological Greek river that’s the boundary between Earth and the Underworld. Here in Mount Osore, all dead souls must cross the river in order to reach the afterlife. Among the souls on their way to the afterlife are the spirits of dead children and unborn babies, who legend says built the piles of pebbles that sit along the riverbed. These young souls are watched over by Jizo, a popular figure of Japanese Buddhism, and the guardian of children taken from this life too soon. 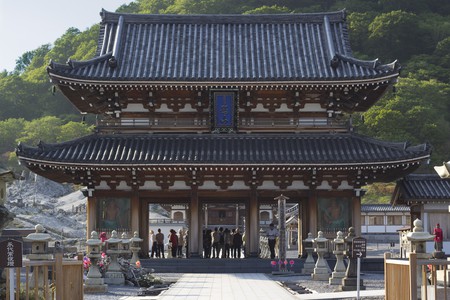 Back in 826CE when monk Ennin stumbled upon this mysterious land, he founded the Bodai-ji Temple, a temple that looks after the dead. From July 22 to 24 each year the bereaved and those wanting to communicate with the dead visit the temple to talk with mediums known as ‘Itako’. Itako are blind women who have gained the ability to speak with the dead after undergoing gruelling and extensive spiritual training. If you feel courageous enough, the area is connected by bus services that take visitors to Mount Osore from Shimokita Station, however don’t bother trying to get there between November and April, Bodai-ji Temple is closed and the land is even more uninhabitable.