Hanatarash: The Story of Japan's Most Dangerous Band 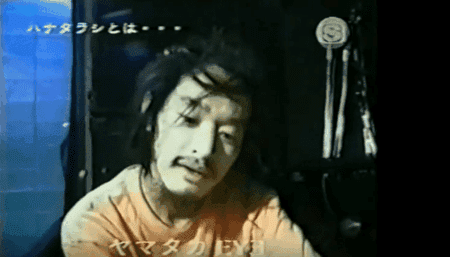 It’s hard to imagine that Japan, the world of square salary men and a country with one of the most polite languages in the world, gave birth to Hanatarash, one of the most dangerous bands to ever exist. Translating to ‘snot-nosed’ in Japanese, Hanatarash was the creation of Yamantaka Eye, a legendary Japanese artist and performer.

Although many people won’t be able to list one of the band’s records, if you have even a passing interest in the history of punk rock, chances are you’ve heard snippets of their legendary story. This is how it goes.

The story of Hanatrash began in 1984 when the two members, Yamantaka Eye and Mitsuru Tabata met after both working as stagehands at a show by German Industrial noise group Einstürzende Neubauten. The band’s frontman, Eye a musician, visual artist, and performer maintained his position as the band’s main member throughout their interesting career as a band which spanned from the early 80s up until the late 90s.

Following the wave of punk that swept through world during the mid-1970s and the 80s, a number of bands inspired by the punk ethos began sprouting in Japan. But unlike the New York garage punk scene, these guys wanted nothing more than to push the envelope in terms of seeing just how extreme rock n’ roll could get.

What is noise music?

Noise music is a genre more focused on producing expressive, often abrasive noise rather than melodically dictated music. Using musical and non-musical instruments, the noise scene was and still is about challenging conventionally held ideas about what music is and what it can be. Giving the free form style noise music performances typically make, the optimal way to enjoy noise is to see it performed at a live gig, because like Hanatarash showed there’s a lot more to it than just sound.

In the years preceding their formation, Eye and his rotating cast of band members would gain a reputation for being one of the most dangerous live bands to ever exist. Forming the band as a way to provide a creative outlet for his negative emotions, Eye wanted to shock his audience and craft an atmosphere filled with despair and discomfort.

The most legendary of shows

The band’s extreme shows quickly became legendary. From cutting a dead cat in half with a machete, to rumours of Eye throwing sheets of glass into the audience, what you were about to witness at a Hanatarash show was a game of Russian Roulette. Their performances arguably hit fever pitch when Eye strapped a circular saw to his back, almost severing his leg as the saw came loose. In 1985, audience members for one performance at Tokyo’s Superloft were required to sign a waiver due to the high possibility of getting injured at the show. One show also saw Eye drive a bulldozer through the venue. Footage of this can still be found online today.

As expected, it didn’t take too long before the band was banned from performing in the live-houses thanks to their previous antics. But as the band continued, the restriction was lifted during the 90s on the condition that they performed without the destruction. This was something the band were happy to abide by, probably because who knows how many more shows it would have taken before something really serious happened.

Thanks to his fearless dive into the relatively unknown world of noise, punk and performance art, frontman Yamataka Eye has garnered a reputation for being an underground music hero. Since his work in Hanatarash he continued an impressive artistic career and formed Boredoms, a legendary psych-punk alternative rock collective. Over his career he’s gone on to tour with and become friends with some of the biggest names in the music world, including Nirvana and Sonic Youth. Forming in 1986, the Boredoms still tour to this day, but if you do have a chance to see them in action don’t worry, there’s no chance you’re going to lose a limb.