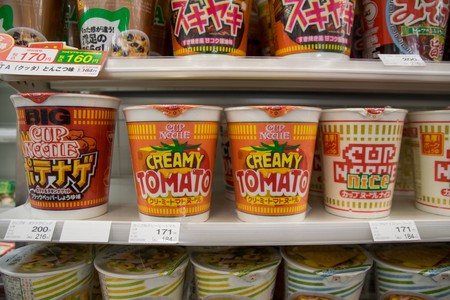 Consumer marketing in Japan is all about seasonal and limited-time-only products. Nissin, the instant ramen geniuses behind 2015’s “Tom Yum Kung” flavored Cup Noodle – which was so wildly popular it flew off the shelves in Japan within a matter of weeks and led to product shortages across the country – are at it again with a new limited winter flavor called “Creamy Tomato Noodle.” Part of Nissin’s tomato-flavored Cup Noodle line, which also includes a spicy “Chili Chili ♪ Chili Tomato Noodle” flavor, the Creamy Tomato Noodle is creating its own kind of buzz – but not in the way you might expect.

This year’s “Creamy Tomato Noodle” flavor is a re-release of Nissin’s 2017 version, which went over well enough with consumers to warrant a comeback. Emblazoned with “Creamy Tomato” in large bold letters dripping with cheese, Creamy Tomato Noodle seems like just the thing to hit the spot during winter months. 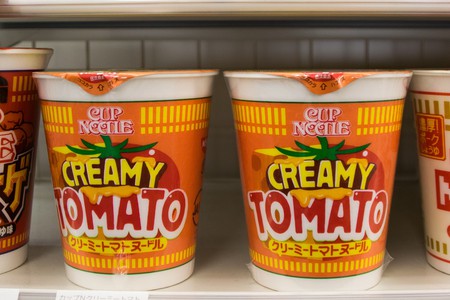 Soon after the product’s release, however, Japanese Twitter was ablaze with customer complaints. Many people noticed an unusual flavor and aroma coming from their Creamy Tomato Noodle ramen, one that’s reminiscent of sour beer and hangover puke — leading to the widely used expression “gero-aji” (ゲロ味) or “vomit-flavored.” Here are a few of the reactions elicited:

“My thoughts on the ‘Creamy Tomato Noodle’ flavored Cup Noodle I had for lunch today………
Smell→Vomit
Flavor→Vomit
Appearance→Vomit
It felt like I was tricked into eating someone else’s barf. Worst lunch ever. Thanks, Nissin.”

“That feeling when you’ve had too much to drink”

“I hate to say it, but frankly, it reminds me of that feeling when you’ve had too much to drink…………(´°̥̥̥ω°̥̥̥｀)”

@rlc_noe followed up with a warning to her Twitter followers:

“REALLY, you shouldn’t try it……because I regretted it instantly 😭😭 Maybe people who don’t drink alcohol will be able to stomach it 😭 But as for you and me, no way 😭”

And yet, some folks hung in there and actually managed to finish the controversial ramen — which really says a lot about gaman (我慢), or Japanese perseverance!

“After one bite of Cup Noodle’s Creamy Tomato Noodle flavor, I was ready to give up
But I threw in some Tabasco, which made it just barely tolerable

“I forced myself to finish it…”

I felt terrible from the first bite. Absolutely tasted like vomit. I forced myself to finish it, but I’m never eating this again( ´,_ゝ`)”

Despite the outcry on Japanese Twitter, there seem to be more than a few favorable reviews as well. Rather than hot water, one Twitter user tried making their Creamy Tomato Noodle ramen with soy milk rather than water, with seemingly positive results.

Other fans of the Creamy Tomato Noodle flavor have shared photos of their Cup Noodle on social media, revealing large pieces of broccoli, tomato, corn, and melted cheese which certainly didn’t look like the product tested for this article.

Could the barf-flavored instant ramen have been the result of a bad production batch? Or a terrible joke by a disgruntled Nissin employee? It’s difficult to say for certain, but fortunately once the winter stock sells out, Creamy Tomato Noodle will plague convenience store shelves no longer.