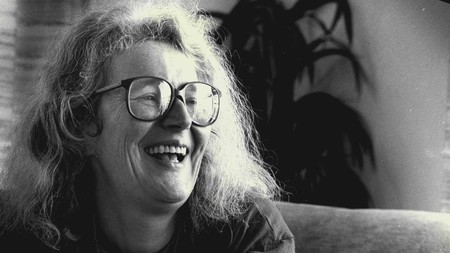 Tokyo had a huge influence on the author Angela Carter, who lived there during her early career and described it as ‘Fellini remaking Alphaville’. How did the city impact on her life and her writing? Culture Trip reports.

In the late 1960s, Tokyo was the largest city on earth. A teeming sprawl, with a combined population of 23m people (today, it is almost double that), it was on the cusp of becoming the futuristic metropolis we now know it as. It was a city in flux, and it was here that Carter found herself, in 1969, alone and eager for an adventure.

Carter was a British writer best known for work that mixed the everyday with the fantastical and the macabre. She died of lung cancer in 1992, aged 51, but her work continued to grow in popularity and she has posthumously been regarded as one of Britain’s greatest postwar writers.

Born in Eastbourne in 1940, Carter attended high school in London, studied English literature at Bristol University and started out as a journalist in Croydon before becoming a novelist. Prior to her trip, she had published four novels, the first of which, Shadow Dance, came out in 1966. Each of them was met with a warm critical response, though they had yet to connect with a wide readership. Her first marriage, to Paul Carter, was in 1960. But she found marriage wasn’t all it was cracked up to be, as she spent much of her time indoors as a housewife and said later that their sex life was unfulfilling.

She came to Japan after winning the Somerset Maugham Award, which included a £500 bursary, to be spent on foreign travel. Travelling alone, she left behind a marriage that was on the rocks. She chose Japan on the grounds that, “I wanted to live for a while in a culture that is not now, nor has ever been, a Judeo-Christian one, to see what it was like”.

In Edmund Gordon’s biography The Invention of Angela Carter, he includes an excerpt from an unpublished autobiography, where she describes the moment she first set eyes on Tokyo while flying in to land:

“When night descended over the ocean, many unfamiliar stars sprang out in the sky; as we approached land, there began to blossom below me such an irregular confusion of small lights it was difficult to be certain if the starry sky lay above or below me. So the aeroplane ascended or descended into an electric city where nothing was what it seemed at first and I was absolutely confused. I was seized with vertigo.”

The Tokyo that Carter explored was full of contradictions – rickety wooden buildings sitting incongruously alongside looming skyscrapers and gaudy neon billboards. She described it to a friend as “architecturally vile”. She discovered seedy bars where salarymen chain-smoked while drinking copious amounts of whisky and beer, entertained by giggling hostesses. Wandering the city streets, she found a Tokyo that was rediscovering itself – the country’s economy was on the upswing, the quality of life was improving and the nation was basking in the afterglow of hosting the triumphant 1964 Tokyo Olympics. And yet earlier that year, massive student riots in the city had prompted tense stand-offs with police, with the authorities arresting scores of people following violence and unrest.

Carter gravitated towards Kabukicho, a notorious red-light district in Shinjuku. Popular with the city’s bohemians as well as tourists, it was a lively nest of bars, cafes and entertainment spots. It was there that she met a Japanese man named Sozo Araki who began chatting with her at Fugetsudo, a favourite local haunt of hers. With a shared love of movies and literature, in particular Dostoyevsky, the two would eventually move in together and embark on a wildly passionate affair. Carter got her first taste of love hotels, a staple of Tokyo life where couples could meet and enjoy discreet encounters. She channels the experience in one of her short stories:

“We were shown into a room like a paper box. It contained nothing but a mattress spread on the floor. We lay down immediately and began to kiss one another. Then a maid soundlessly opened the sliding door and, stepping out of her slippers, crept in on stockinged feet, breathing apologies. She carried a tray which contained two cups of tea and a plate of candies. She put a tray down on the matted floor beside us and backed, bowing and apologizing, from the room whilst our uninterrupted kiss continued. He started to unfasten my shirt and then she came back again. This time, she carried an armful of towels. I was stripped stark naked when she returned for a third time to bring the receipt for his money.”

Carter was an outsider in more ways than one. Fiercely intelligent, witty and outspoken, she was entirely removed from traditional Japanese notions of how a woman should behave. She worked as a translator for the television station NHK and even did a short stint in a hostess bar – a naturally curious person with a high libido, she was fascinated and at times preoccupied by sex and sexuality, and she was utterly unafraid to confront what pornography meant to women, as seen in her non-fiction book The Sadeian Woman. Not a great deal is known about her time working as a hostess – her journals from that time do not provide any major details – but she later said in an essay for New Society that her time in Japan “radicalised” her as a feminist.

Her lover’s friends found Carter intimidating, so she spent large amounts of time in Tokyo by herself, drinking coffee in jazz bars and writing letters and postcards to friends, among them author Anthony Burgess, who wrote A Clockwork Orange. In one dispatch she described Tokyo as “…the most absolutely non-boring city on earth”.

More than anything, Tokyo, and by extension Japan’s culture, fed directly into Carter’s writing. Living in a small apartment, she said she felt too stifled to write an entire novel. Her solution instead was to write a collection of fictional short stories, entitled Fireworks: Nine Profane Pieces. Veering from real-life drama to colourful fantasy, parts of the book directly reflected her attitude towards her surroundings, as in this excerpt from one story, where she touches on the sexism inherent in Japanese culture:

“As they say, Japan is a man’s country. When I first came to Tokyo, cloth carps fluttered from poles in the gardens of families fortunate to have borne boy children, for it was the time of the annual festival, Boys Day. At least they do not disguise the situation. At least one knows where one is. Our polarity was publicly acknowledged and socially sanctioned.”

Carter occasionally ventured outside Tokyo. At one stage, she grew frustrated, and she and Araki rented a seaside cottage in Chiba prefecture, where she wrote The Infernal Desire Machines of Doctor Hoffman. Published in 1972, it is a surrealistic mix of dystopian politics, science fiction and feminist perspective that Carter wrote by hand while seated on a tatami mat in her cottage; she worked through the nights until dawn, then slept until the afternoon. She had high hopes for it, but was crestfallen when it failed to sell well. From 1969 to the early 1970s, Angela did not spend all her time in Japan. She returned to England briefly in order to renew her visa. At one stage she paid a visit to Hong Kong, where she took off her wedding ring and left it in an airport ashtray, applying for a divorce soon after.

Carter would eventually return to England in 1972; her love affair with Araki had ended in tears, and her life in Tokyo was no longer fulfilling. She finalised her divorce and would only return to Japan one more time for a holiday in 1974, where, among other activities, she visited the famous Kanamara Matsuri Penis Festival. But Tokyo remains a crucial part of her life and work, and she sums it up beautifully in an essay from the book Nothing Sacred, a collection of her non-fiction writing:

“Tokyo ought not to be a happy city – no pavements; noise; few public places to sit down; occasional malodorous belches from sewage vents even in the best areas; and yesterday I saw a rat in the supermarket… But, final triumph of ingenuity, Megalopolis One somehow contrives to be an exceedingly pleasant place to live. It is as though Fellini had decided to remake Alphaville.”