A Brief History of J-Pop in 11 Bands 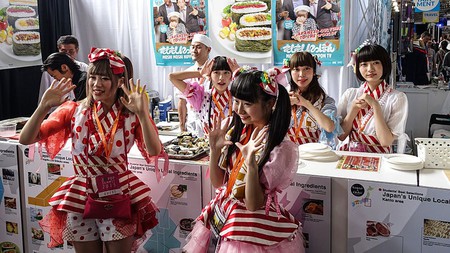 Given the rise of names like Baby Metal, Kyary Pamyu Pamyu and AKB48 J-Pop is really only now starting now to make a proper dent on the international pop radar. But the genre’s history goes as far back as its western contemporaries. To help you dive into this fascinating world here’s a quick crash course on J-Pop through some of the genre’s biggest and most interesting artists. Though of course this is by no means a comprehensive history of J-Pop, bands like Baby Metal and Purfume have not been added to this list (that would require an entire encyclopedia) hopefully it’ll help guide you into getting to know about Japan’s pop scene a little better.

Track: ‘Tokyo Boogie Woogie’ (1947)
The start of Japanese popular music in the more contemporary sense can be tracked back to the 1940s and 50s around the same time rock ‘n roll was making waves in western world. Influenced by his US contemporaries following the second world war, Japanese songwriters Ryoichi Hattori penned the track ‘Tokyo Boogie Woogie’ for the then crowned ‘queen of boogie woogie’ Shizuko Kasagi. Though of course it’s not the country’s first form of popular music it’s definitely the beginning of a new more youth oriented sound hitting the mainstream.

Track: ‘Ue wo Muite Arukō’ aka ‘Sukiyaki’ (1961)
Crooner Kyu Sakamoto’s heartbreaking single ‘Ue wo Muite Arukō‘ was essentially the first time Japanese popular music hit international audiences. The lyrics are about a man who looks up at the sky so his tears won’t stream down his face. In the US the song was also a hit, but it was released under the name ‘Sukiyaki’ because for foreign audiences ‘Ue wo Muite Arukō’ was a little too difficult to pronounce. The world sukiyaki however has no connection to the lyrics of the song, in fact sukiyaki is a Japanese beef dish.

Track: ‘Natsu Nandesu’ (1971)
As Bob Dylan, Joni Mitchell and their contemporaries were making thoughtful folk music cool in the states, Happy End were doing something similar in Japan. Bringing rock psych to the Japanese masses, the four piece though were clearly influenced by western sounds. However keen to keep their Japanese identity, they’re still to this day credited as being the first rock act to sing in Japanese.

Track: ‘UFO’ (1978)
The arrival of Pink Lady can really signify the arrival of J-Pop in its maybe more recognised incarnation, what it looks like today. One of the first ‘idol groups’ in the contemporary sense, this duo released a string of hit singles throughout the late 70s and 80s. Thanks to their equal measures of accessibility and uniqueness, the duo was given a short lived musical variety show in the States, it was pretty bad though, and it wrapped up after five weeks. The duo’s respected musical legacy however has luckily lived on.

Track: Firecracker’ (1980)
As Japanese popular music moved into the 80s, it just like the western pop world, became more interested in the development of new electronic instruments and production. Of course as we saw with new wave this influence bled into the pop soundscape. One band Yellow Magic Orchestra were real pioneers of mixing electronic production, danceable minimalism and traditional eastern instrumentation into fully realised pop bangers. Think the Japanese version of Talking Heads.

Track: ‘Sailor Fuku wo Nugasanaide’ (1985)
Before AKB48 there was Onyanko Club, one of the first incarnations of the mega idol groups we see dominating the pop charts today. With 52 official members and three unofficial members, the group performed in separate subgroups, provided soundtracks to a number of popular films and animes and also had their own variety show. The success of the group essentially set the precedent of what the future of Japanese idol groups would look like.

Track: ‘Easy Come, Easy Go’ (1990)
One of the biggest selling artists in the world and one of Japan’s chart dominators is rock-pop duo B’z. Following the idol group emergence, these guys made waves on the J-pop scene thanks to ability to combine hard rock and pop ballads. As they were slating the charts, their boy band contemporaries SMAP, were also taking over Japan with their more One Direction style formation and catchy pop gems about love.

Track: ‘White Love’ (1998)
After their formation in 1996, Speed, a four piece haling from Okinawa, quickly became one of the most successful girl groups in Asia. Selling over 20 million albums and singles during their fleeting career, the band decided to break up in 2000 after just four years in order to focus on their studies. Their creation and success however influenced many aspiring idol groups who followed not long after. Since breaking up they’re reformed a few times and even performed with modern J-Pop legends AKB48.

Track: ‘Vogue’ (2000)
It’s almost a crime to talk about J-Pop and not mention model, actress and singer Ayumi Hamasaki. What makes her stand out in the J-Pop scene is her constant rebellion against the typical manufactured J-Pop idol groups. Since the beginning of her career, Hamasaki has written her own lyrics, had production control over her sound and even co-composed some instrumentals. While many pop wannabes are willing to let go of any creative control in order to ‘make it’ Hamasaki’s staunch independence has inspired a swarm of more independent solo J-Pop artists the biggest one today being Kyary Pamyu Pamyu.

Track: ‘Manatsu no Sounds Good’ (2012)
It was of course only a matter of time before this list would get to arguably the biggest band in Japanese pop history, AKB48. Formed in 2003 by Yasushi Akimoto, the group is named after the suburb of Akihabara and features 130 rotating members. From big controversies, new performance innovations and some of the most fascinating marketing techniques ever employed in pop music history (see AKB48 café) this group is the unbeatable present and future of mainstream pop in Japan.

Track: ‘Crazy Party Night’ (2015)
Though Kyary Pamyu Pamyu and ABK48 are both technically J-Pop and both are making major chart and culture waves here in Japan today they represent two very different facets of the contemporary J-Pop world. While AKB48 is all about manufactured perfection, Kyary Pamyu Pamyu is pushing the creative and artistic boundaries of what it means to be a J-Pop artist. Like her other more ‘out there’ contemporaries such as Baby Metal through her uniqueness she’s making a dent on the international music scene, while AKB and their sister groups are not. If AKB48 is the future of mainstream Japanese pop, Kyary Pamyu Pamyu is the future of international pop in general. If you want to check out an act that’s actually a bit of a cross between AKB48 and Kyary Pamyu Pamyu look into emerging group Musubizm.