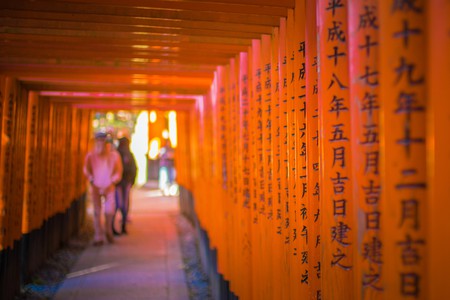 Fushimi Inari Taisha is Kyoto’s most important Shinto shrine and one of its most impressive attractions. Located in southern Kyoto, it is famed for its variety of shrines and vermilion torii shrine gates, with thousands of them winding their way up the sacred Mount Inari. Whatever you do, don’t miss it.

Fushimi Inari Taisha is the head shrine of Inari, the god of rice, sake and prosperity and patron of business, merchants and manufacturers. The shrine sits at the base of Mount Inari and includes many smaller sub shrines which span 4 kilometres up the 233 meter (764 ft) mountain. Each of the famous torii shrine gates has been donated by an individual or a Japanese business in the hope of receiving good luck and fortune. The name of the donor is inscribed in black ink on the back of each gate. 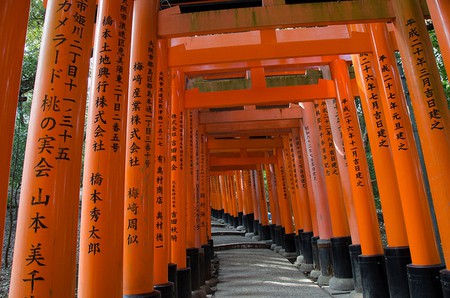 The History of Fushimi Inari Taisha

The shrine was founded in 711 making it one of Kyoto’s oldest and most historic landmarks. It was founded on Inariyama hill in southwestern Kyoto by the Hata family, moving to its present location in 816. There is a fascinating story attached to the origin of the shrine. The legend goes, a rice cake was shot into the air, which turned into a swan and flew away, eventually landing on a peak of a mountain, where rice grew (an auspicious omen in Japan). This led to the deity Inari Okami (the god of rice) being enshrined on the plateau and the start of Fushimi Inari Taisha.

The shrine became an object of imperial patronage during the early Heian Period (794-1185). In 942, it was elevated to the highest rank for Shinto shrines. The main shrine structure was built in 1499 and is designated as an Important Cultural Property of Japan. It contains five shrines: a lower shrine, a middle shrine, an upper shrine and auxiliary shrines. 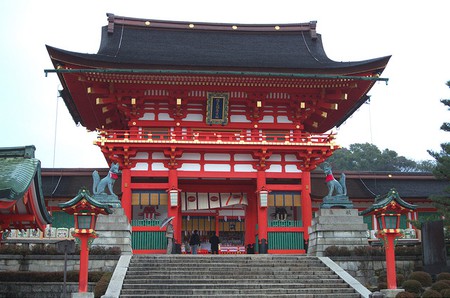 At the shrine’s entrance stands the historically significant Romon (tower) Gate, the shrine’s main gate, which was built in 1589 thanks to donations from samurai warlord and ruler of Japan, Toyotomi Hideyoshi. 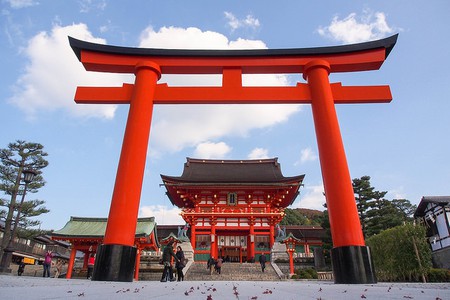 At the rear of the shrine’s main grounds is the Senbon Torii (thousands of torii gates), the entrance to the torii gate covered hiking trail. It marks the start of two dense, parallel rows of gates that are the main reason most foreign visitors come to Fushimi Inari Taisha. 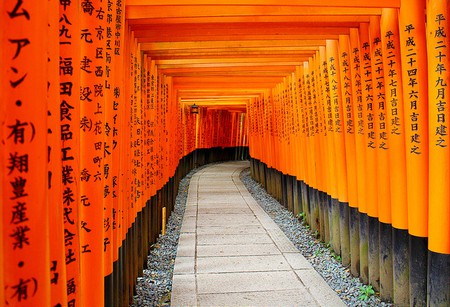 People of all ages have gathered at the shrine to pray for bountiful harvests, success in business, and the hope of their wishes and dreams coming true. It draws thousands of people, seeking blessings, especially for the first prayers of the New Year. The popular shrine is believed to have over 30,000 sub shrines scattered throughout Japan. 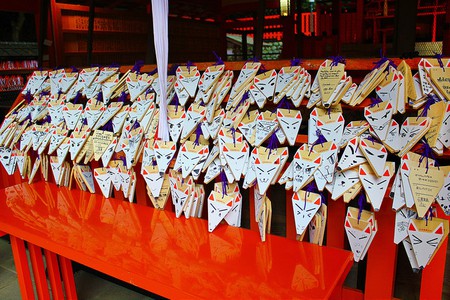 The Foxes at Fushimi Inari Taisha

After a few minutes of visiting Fushimi Inari Taisha you will notice that there are dozens of statues of foxes across the shrine grounds. Why you might ask? Foxes or kitsune in Japanese are regarded as the messengers of the gods much like the deer of Nara Park in Nara. Some of the stone foxes even have keys in their mouths. These are keys to the rice granaries which they protect. 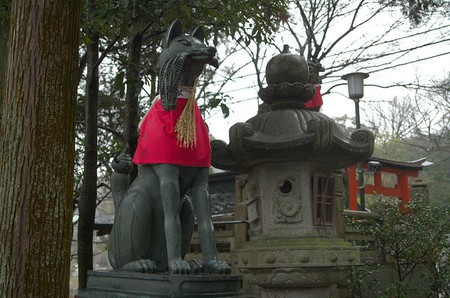 The shrine is located just outside of Inari Station on the JR Nara Line, which is a five minute train ride from JR Kyoto Station.