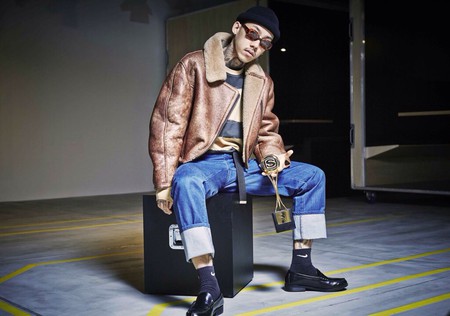 Given its safety, cleanliness, and famously polite demeanor, Japan is a country not immediately recognised for its hip hop attitude, but the hip hop scene is alive and well. Just as diverse as their J-Pop contemporaries, hip hop artists in Japan continue to push the boundaries of genre, art, and fashion on a constantly evolving basis. If you’re interested in exploring the fascinating and diverse world of Japanese hip hop these are the names that have been running the streets of Tokyo and wider Japan.

Rapper and artist Yuki Chiba aka KOHH, is one name you might be familiar with even if you have just a passing interest in Japanese hip hop. Probably the biggest cross-cultural breakthrough in recent times, his recent American influenced tracks Dirt Boys and Glowing Up have piqued the interest of international communities and garnered him a large following across the globe. His story is a rather atypical one by Japanese standards. KOHH’s parents were both drug addicts and while he was growing up, his father committed suicide. These hardships are something the conscientious rapper speaks about candidly in interviews and his music. His life experience is what he attributes to his resilience, something you need to break through in the hip hop scene.

For upbeat hip hop like Chance the Rapper, listen to MCpero

Though female MCs are still a little underrepresented in Japan, there’s definitely a wave of upcoming names, and MCpero is riding high on that tide. Born in Saitama in 1993, the solo rapper’s single SKIP is the perfect encapsulation of her super chilled, but upbeat hip hop efforts. If you like what you’re hearing check out her debut LP の一人遊び (translation: One Person Fun) which came out via indie label OMAKE CLUB in 2016. As well as her solo efforts MCpero has worked with local legends Tokyo Health Club.

Fans of Tyler the Creator will dig kiLLA

If you like your hip-hop a little more streetwise, you can’t go past Tokyo rap crew kiLLA. Heavily trap influenced, MC kZm’s gravelly opening vocals on the track SHINE draw parallels to Goblin (2011) record era Tyler the Creator. Entirely self-sufficient the kiLLA crew have a production, engineering and video team in-house, meaning what you get is pure kiLLA, no major label pressures or influence. If you have the urge to dig a little deeper check out the group’s Youtube channel for solo work by each of the individual members.

Though he tragically passed away in 2010, it’s almost a crime to write about Japanese hip hop without mentioning record producer, record store owner, DJ, composer, arranger and icon Jun Seba aka Nujabes. His diverse approaches to hip hop broke new ground here in Japan and paved the way for many ambitious producers to follow. Often blending jazz and chilled out house sounds into his hip hop creations, Nujabes’s releases are immediately recognisable without ever sounding repetitive. Over his career he worked with countless artists both in his home country and across the world.

One of the bigger groups floating around the Japanese hip hop scene, KANDYTOWN consists of 16 members, each bringing their own unique flavour to the collective’s outputs. Not every member of KANDYTOWN is a rapper, some are producers, video makers and other creative types all coming together to pretty much take over the Japan rap scene. While many hip hop artists are jumping on board the trap music bandwagon, KANDYTOWN are making their mark by perfecting their trademark ‘90s influenced old school hip hop sound.

If you listen to DJ Shadow, you have to hear DJ Krush

Similar to Nujabes, DJ Krush (real name Hideaki Ishi) may not be a brand new name if you know a little about Japan’s hip hop scene, however given is recent efforts he’s worth a revisit. Drawing a lot of influence from the jazz and soul world, DJ Krush’s outputs have reinvented the rules of what hip hop production can be, not only in Japan but across the globe. Just as fascinating as his music, Ishi has a rich personal history. As a young boy, he dropped out of to join a local gang and and not long after became a member of the infamous yakuza. As the legend goes, after discovering a severed finger that belonged to a friend he thankfully decided to leave the underworld and focus on music.

For Nicki Minaj weirdness spend some time with Daoko

Say what you want about Nicki Minaj, one thing she’s good at is pushing the boundaries of hip hop, pop and what it means to be a female rapper today. Japanese rapper Daoko takes Nicki’s weirdness and boundary pushing and brings it to a more J-Pop oriented world. Only born in 1997, Daoko’s sophisticated ability to traverse through the world of J-Pop, electro while delivering spitfire rap have made her incredibly popular in her home country. She’s definitely one name the international community should keep a close eye on in the next few years.

Pakin’s music is not for the faint hearted. The Tokyo based MC has been bringing the abrasive energy of UK grime to the streets of Japan for a little while now, helping foster a small but developing local scene. Inspired after reading about Dizzee Rascal, Pakin has worked tirelessly releasing new music and working as a bridge between the UK and Japan. He’s a member of the Birmingham based Dark Elements in crew as well as his own collective Tokyo’s GUM.