7 Festivals to Celebrate Semi-Nude in Japan 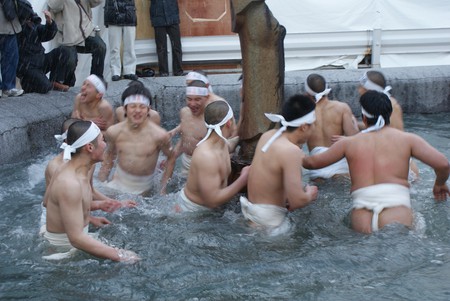 Japan is home to a number of rather unique festivals, commonly known as matsuris. From bellybutton parades to log riding, to penis monuments carried through the streets, this country knows how to celebrate. One reoccurring theme on the country’s festival calendar is the ‘nude festival’ known in Japan as ‘Hadaka Matsuri’, happening throughout the nation, each pocket of Japan celebrates being nude in a very different way, here a just a handful of festive ways the locals like to get their clothes off.

If there were one most famous ‘naked festival’, it would be this one, held in the heart of Okayama prefecture. Over its lifespan, it’s quickly become one of the nation’s most infamous and popular events that dates back over 500 years!

Each winter around nine thousand men decked out in humble loincloths gather in freezing conditions to battle each other in the name of securing a ‘lucky sacred stick’. It’s said that the one man who manages to get the sticks is coined the ‘lucky man’, and is blessed with a year of happiness.

Each freezing February thousands of locals and guests make the pilgrimage to Owari-Okunitama Shrine, also known as Konomiya Shrine in Inazawa-City for something particularly unique.

Here a young local man chosen to be the city’s official Shin-Otoko, or ‘Lucky Man’ has all his hair completely shaved off, he strips completely naked and prepares to be chased by a swarm of naked ‘unlucky’ men clad in loincloths. These unlucky men attempt to touch or hit the naked lucky man in order to rid themselves of bad luck. Though its logic seems a little confusing, it’s an event that’s been running since the year 767, so there must be something to it.

If there’s one thing that probably should be associated with nakedness it’s fire, however Somin-sai, also known as the Festival of Naked Men and Fire, does just that. Having been held for over 1,000 years now, it’s one of the best-known events on the Tohoku Prefecture calendar.

Also held in February, the celebration sees loincloth wearing men push their endurance levels to breaking point trekking through an ice-covered course that weaves from the Kokuseki temple in Mizusawa to the frozen Ruritsubo River. What draws the competitors to the event is the allure of ‘the sacred bag’, which is believed to bring 12 months of health and happiness to the event champion.

Getting semi-nude and getting muddy is what the people of Ageo in Saitama Prefecture are all about. Each July sees locals gather to get muddy all in the name of health and happiness. During the celebration, men dress in nothing but loincloths to carry around portable shrines (mikoshi) and visit parishioners’ homes before rolling through the mud with the shrines in tow. To this day the even remains one of Saitama largest annual events.

Situated in Chiba prefecture not too far from Tokyo is one of the country’s major nude events. Held annually on the same holiday weekend in mid-September each year, locals and guests gather to pray for a fruitful harvest and good fishing in the next 12 months.

Though it is called a ‘naked festival’ technically festival-goers are decked out in longjohns or traditional Japanese work and matsuri trousers known as momohiki. Typically the event begins in the morning, but hits its peak early to mid-afternoon, when hundreds descend upon Ohara beach carrying mikoshi (portable shrines) into the ocean. The event wraps up after a final tour of the town before at the grounds of the local Ohara Elementary School, where fireworks and other traditional style festivals events are hosted.

Equal parts unconventional and endearing, the Hokkai Heso Matsuri aka The Belly Button Festival is relatively young festival in Japanese standards was founded in Furano, a city in Hokkaido in 1969. An initiative for the people of Furano to come together and celebrate their area while building connections and having fun, this celebration of the bellybutton was a slow burner.

During the first event only 11 people turned up. Over time however, word started to spread and locals and guests began coming to the city center to see what the party was really all about. These days hundreds of local people get together to march, party and perform with faces painted on their bellies all in the name of fun.

A little more contemporary than the other on this list, Okinawa’s Culture Beach Festival is a celebration of summer, partying and enjoying the laid-back atmosphere of this tropical pocket of Japan. This May festival features DJs, live music and partying all day and night long. Held on Ikei island, it’s the best way to defrost after a winter of battling it out half nude in the snow.