10 Indonesian Fashion Designers You Should Know 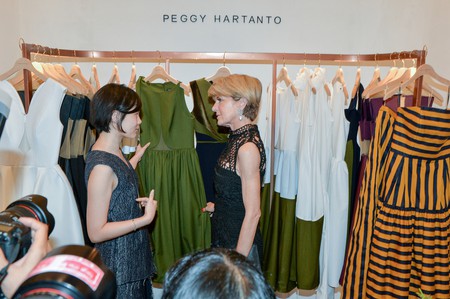 Fashion has been one of Indonesia’s main industries, and the country owes much to these talented designers who go all-out in creating their exceptional work. From ethnic-inspired to more international designers, discover the best Indonesian fashion designers you should know.

The Jakarta-born fashion designer gained international recognition after appearing at Paris Couture Fashion Week in 2010. His label, Didit Hediprasetyo, is headquartered in Paris, but he still often incorporates traditional Indonesian fashion elements into his glamorous couture design. The designer also extends his tasteful lavish style to his collaboration with BMW as the second designer after Karl Lagerfeld to design the interior and exterior of a limited BMW series.

Since debuting in London in 2015, Anniesa Hasibuan has been proud to showcase her iconic work across the globe. She has a distinctive design style that embraces the modest Muslim-inspired clothing principles with graceful glamorous enhancements, making her work both much appreciated and criticized in the fashion landscape. She is the first person to feature hijab headscarves in every look at New York Fashion Week, which paves her way as an internationally-acclaimed fashion designer. She opened her first boutique in the upscale area of Kemang in Jakarta, Indonesia, and has since opened more stores in New York, Istanbul, and Malaysia.

A post shared by Anniesa Hasibuan Official (@anniesahasibuanofficial) on May 4, 2017 at 11:03pm PDT

The architecture and film graduate-turned-fashion designer first launched his couture brand in New York, named Kraton that means ‘palace’ in Indonesian. In addition to that, he also started a ready-to-wear fashion line in Jakarta in 2012. As a women’s fashion designer, Auguste Soesastro has a strong philosophy that places his brand against objectification of women. That view is evident in his elegant and sleek design, enabling women to move comfortably and accentuate the intellectual. He constantly features Indonesian design elements and materials that he sources locally, giving his design an authentic traditional feel to modern cuts.

Despite having to quit fashion school halfway due to the Indonesian monetary crisis in 1998, Oscar Lawalata’s diligence, hard work, and talent have enabled him to open his first boutique in Jakarta. His works have been displayed internationally, including the impressive modern batik collection he showed in Los Angeles in 2016. Even though he likes to incorporate traditional elements to fashion, Oscar Lawalata promises to keep it modern and elegant, and to create something people can wear proudly while still being cultural.

Sebastian Gunawan has traveled across the globe to study fashion but came back to Indonesia to establish his fashion house in 1993. Ever since, he has been awarded both nationally and internationally, known for his sparkly elegant evening gowns with extraordinary crystals, beads, and stones. The hauté couture designer has also successfully launch collections of bridal gowns and children clothes, also gleaming with shining embroideries.

Elegance is the only beauty that never fades. -Audrey Hepburn Photoshoot for our bridal line @sebastiansposaofficial

A post shared by Sebastian Gunawan (@sebastiangunawanofficial) on May 6, 2017 at 4:42am PDT

Tex’s love for fashion has been shown since an early age. In fact, he left high school to study fashion in Jakarta. When he first debuted in Jakarta Fashion Week in 2012, his delicate avant-garde collection stole the hearts of many. His skill with intricate details has brought his work into the global entertainment scene. One of his most celebrated pieces is the iconic white bridal gown seen in The Hunger Games: Catching Fire.

This architect-turned-designer founded Ikat Indonesia, a brand that brings the traditional ikat fabric of Indonesia to prestigious runways. An expert in making the best out of geometric patterns and structures, Didiet is able to create one-of-a-kind fashion pieces that gets him recognized by fashionistas and celebrities. His design was even used in one of the Grammy Awards 2016 goody bags.

Considered a senior fashion designer in Indonesia, Biyan has catered to many generation’s high-fashion needs. Known for his romantic but modern collections, his first fashion line BIYAN is still one of the most-sought fashion brands since its launch in 1984, when he first got back to Indonesia after studying fashion and working in Europe for 15 years. Throughout the years, the Surabaya-born fashion designer has kept on adding more impressive works including an urban streetwear line and bridal gown collections.

Peggy Hartanto’s works have been worn by international celebrities like Gigi Hadid, Kelly Cuoco, and Chloe Bridges. Her eponymous label has been hugely successful and influential, and has helped her to get onto the list of Forbes 30 Under 30 Asia. Known for her high-end but ready-to-wear brand, Peggy’s works often feature clean elegant lines and structures. She also believes that a fashion collection has to have a story and philosophy that makes it special —something she practices every time.

From the archive: #PH13UNSEEN inspiration

Windri’s label, NurZahra, has collections of casual Muslim-inspired wear that charm fashionistas, Muslim or not. Upon leaving her General Manager position at a government-run institution to work in fashion, Windri has gathered design inspirations from all across the world. She often marries Indonesian traditional design elements with foreign techniques, creating distinctive designs with strong characteristics.

Hijab design shocked centre stage at the recently held #TokyoFashionWeek. The article from #gmanetwork wrote: among the aspiring Asian designers competing for the limelight during the fashion week, one of the most striking was an Indonesian label's bid to blend a traditional Muslim headscarf with haute couture. Designer: #WindriWidiestaDhari Photo: Toshifumi /AFP Photo