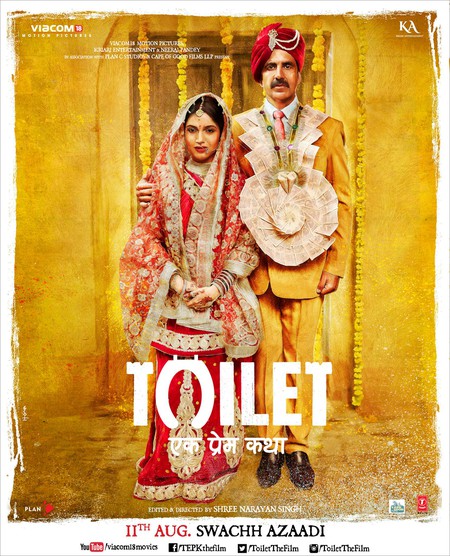 One of the biggest actors in India, Akshay Kumar, is starring in a film that he has co-produced, called Toilet-Ek Prem Katha (translated as Toilet: A Love Story) that focuses on the problem of sanitation and toilets in the country. This satirical comedy is probably just what India needs to start paying attention to the problem.

Toilet-Ek Prem Katha is about a village girl who falls in love with a boy and wants to marry him. But, on finding out that his home doesn’t have an indoor toilet, and that she must just obey the call of nature outside, she refuses to live there. The film is clearly trying to raise awareness of the plight of women who live without a safe and hygienic toilet. A recent WaterAid report stated: ‘Eight Olympic-sized swimming pools could be filled daily with excrement produced by India’s 41 million urban residents who must defecate in the open’.

Since 2014, India’s Prime Minister Narendra Modi has been taking paramount steps to ensure more citizens have access to toilets. From then until 2016, 5.8 million toilets were built all over the country – great news – but the problems didn’t end there. Public policy expert Chandrakant Lahariya has said, “Construction of toilets is the easiest part of this process and attention has to be given for treatment and disposal of excrement.” The lack of a functional waste-disposal system has lead to increasing number of people, particularly children under the age of five, dying of diarrhoea. Stunted growth among children is also a problem, since the diseases they incur due to poor sewage systems result in low nutrient absorption in their body, even after proper food intake. 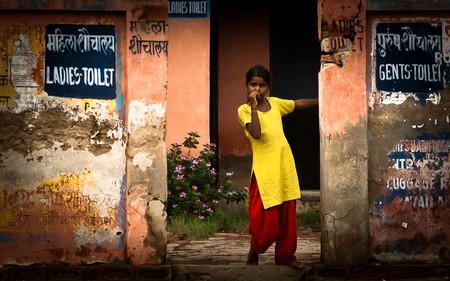 Women are the ones who suffer the most; on average, an Indian woman living in a village has to hold her bladder for nearly 13 hours before relieving themselves, risking urinary tract infections. They tend to wait until sunset, when visibility is almost nil, to venture into the pasturelands, but this leaves them vulnerable to attacks; women have been raped in fields on their way to relieve themselves as well as being harmed by animals. Women who work as domestic aids in metropolitan cities face a different kind of problem, as apartment buildings don’t usually have toilets and they have to wait until they reach home to relieve themselves. Due to the strict caste system, it’s unlikely that apartment owners would open their lavatories for their maids. 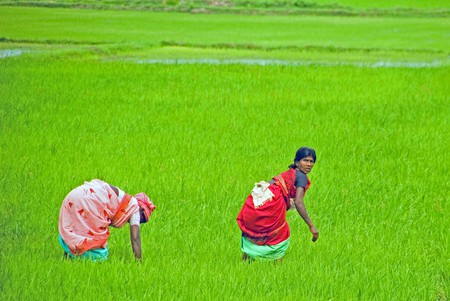 On an average, an Indian woman living in a village has to hold her bladder for nearly 13 hours | © Procsilas Moscas / flickr

India’s toilet problem has a cultural angle, too and the issue goes much deeper than meets the eye. Out of 49% of households that have toilets, there is still one member of the family who defecates in the open. Men, especially, think it’s their duty to build toilets for the women in their family, but they don’t use it themselves – it’s much easier and comfortable to do it in the open, they say. Many non-government organisations are trying their best to improve the condition. Ecoloove is one such organisation, that builds ecological mobile toilets for city slums and rural parts of India. 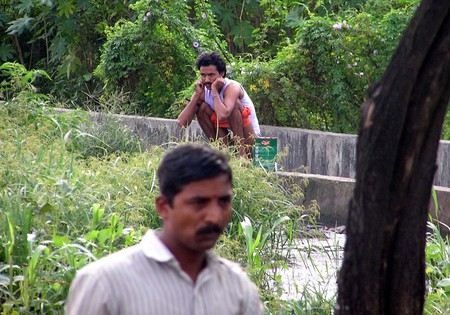 Men think it’s their duty to build toilets for the women in their family, but don’t use it themselves | © Henrik Bennetsen / flickr

The United Nations declared November 19 as World Toilet Day. Among the countries that face an open defecation problem, India comes first in the list with 597 million people dealing with the issue. Unfortunately, India’s metropolitan and higher caste people are unwilling to discuss the matter, as defecation and scavenging is considered a dirty, unpleasant topic. But that’s where we hope the Bollywood film Toilet – Ek Prem Katha might change the situation, bringing the topic out in the open and hopefully prompt discussions to confront the problem.