Weekend In New Delhi: What To Do, See And Eat

For some, India’s diverse and densely populated capital, New Delhi, may sound like a stressful and unexciting idea for a long weekend, with the prospect of Delhi-belly being one of the biggest off putters. However, this bustling metropolis draws in travelers time and time again, and with good reason. A city enriched in captivating Mughal history dating to the 1600s, New Delhi also has one of the fastest developing city centers.

Stepping out onto the streets of New Delhi for the first time is an all-encompassing sensory experience: the sound of the beeping tuk-tuks, the blended smell of fresh spices and gasoline, the warm sunshine, women dressed in saris riding the back of mopeds, painted elephants stopping traffic and screaming school children piled into tuk-tuks. As one of the world’s busiest cities, there is enough to do, see and eat in New Delhi to last a lifetime, but if you only have one weekend, check out our guide on where to stay, what to eat and what to do and see when in this mesmerizing city. 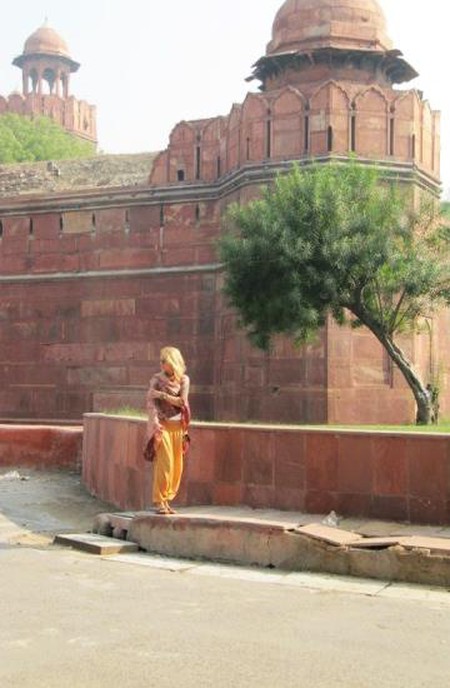 Connaught Place is a sprawling circular market in the very center of New Delhi built during British rule. The inner ring of shops and restaurants circles an exciting green space often hosting free events and shows. Just outside Connaught Circus, you can find plenty of budget, mid-range and top hotels to base yourself in whilst in Delhi, just a stone’s throw away from New Delhi Rail Station (NDRS) and a short metro journey to the International Airport. 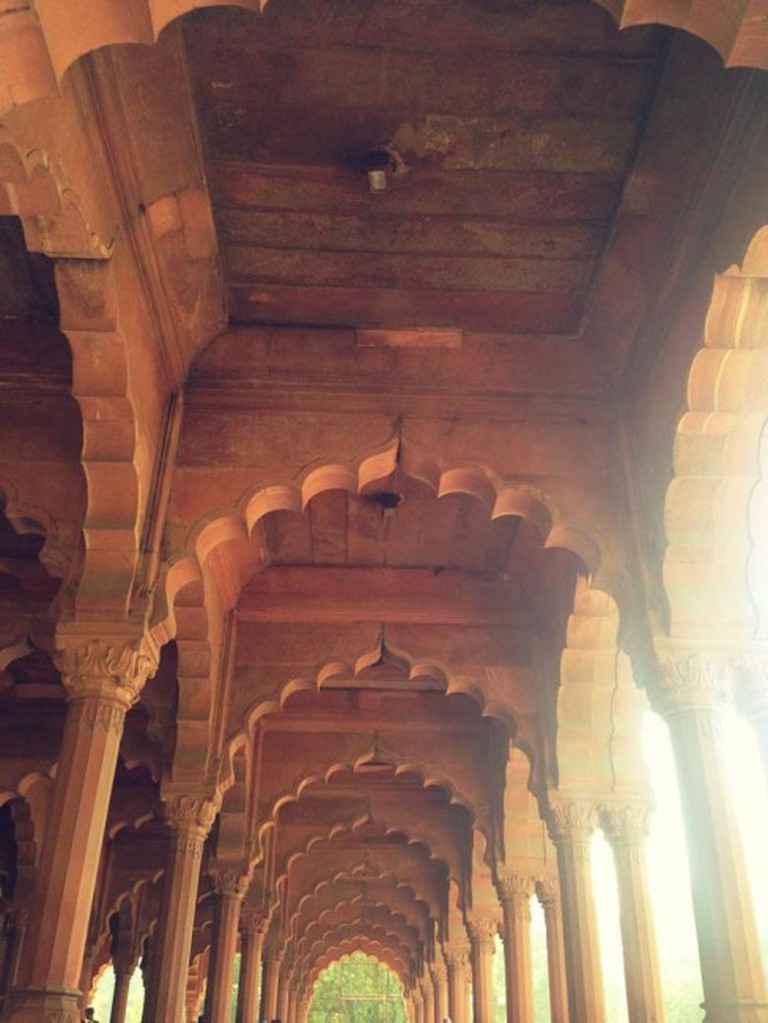 The 1526 AD Red Fort brings a spectacular fusion of Islamic, Persian, Timurid and Hindu traditions under one development. The architecture and beautiful gardens influenced later buildings throughout Rajasthan, particularly Agra where an almost identical Red Fort lies. Situated in Old Delhi next to India’s largest mosque Jama Masjid and Chandni Chowk bazaar, Red Fort is a calm, ambient space to learn about New Delhi’s rich cultural heritage and history. There are audio tours available; however, you’re also free to wander around and read the plaques on parts that take particular interest. Whilst some may argue the Red Fort Complex is a better sight in the daytime, a sound and light show portraying Mughal history is a tourist attraction in the evenings. Entry costs just Rs. 150. 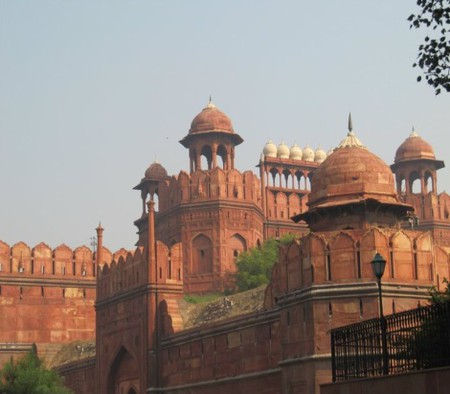 India’s largest mosque in the center of Old Delhi can hold up to 25,000 people. The ‘Friday’ Mosque is overwhelmingly impressive, and many argue it trumps their visit to Agra’s famous Taj Mahal. Entry is free; however, you must pay if you wish to bring in a camera, and there is an additional cost to climb the minaret standing 40 meters high and providing spectacular views of Old Delhi (note that women must be accompanied by a man to climb the minaret). It is a fascinating sight to see thousands of people gather at prayer time to hear the call to prayer. 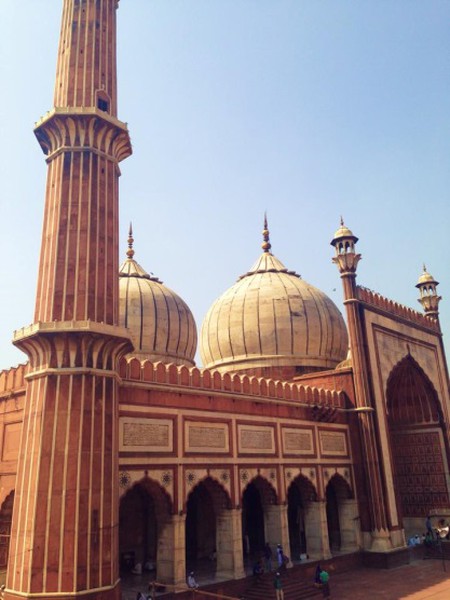 A must-see in Delhi is Humayun’s Tomb. A strong influence on the Taj Mahal’s structure and shape, the tomb is surrounded by beautifully kept gardens with smaller tombs of Mughal emperors. Although a little more expensive than other attractions at Rs. 250, you will get your money’s worth. Visit in the late afternoon to enjoy the glorious sunlight lowering through the greenery and reflecting off the marble tombs. 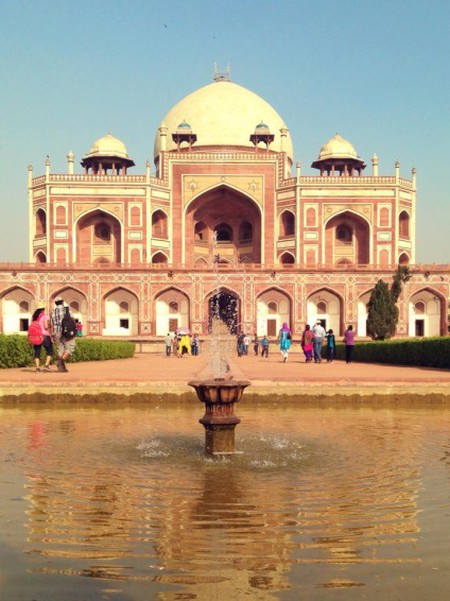 Laying on the banks of the Yamuna River, a memorial for Mahatma Gandhi marks the spot where he was cremated following his assassination in 1948. The memorial itself is not lavish or resembles any of Delhi’s enormous temples but consists of a simple black marble stone accompanied by a single candle in memory of the national treasure who fought for Indian Independence. Surrounded by immaculate gardens of palms and beautiful flowers, the memorial is a thought-provoking sight that invites visitors to reflect on India’s turbulent history. 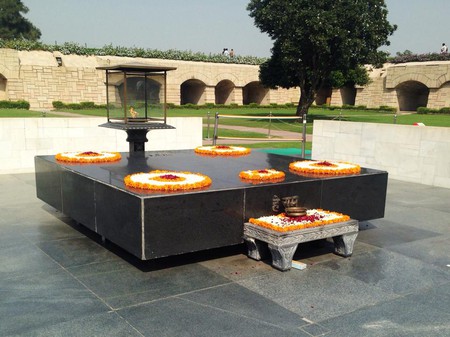 These tranquil gardens are Delhi’s favorite escape. The gardens are home not only to ancient tombs of Lodi rulers and a beautiful 15th-century mosque but also to a wide variety of botanical plants and birds. You can spend hours here watching children play, city workers unwind and tourists stop to appreciate one of the most peaceful and mystical spaces in India. The garden lake is also a beautiful sight with a bridge to stand on while looking at the reflections of the gardens. Make sure to visit at sunrise or sunset for the most spectacular views and colors. 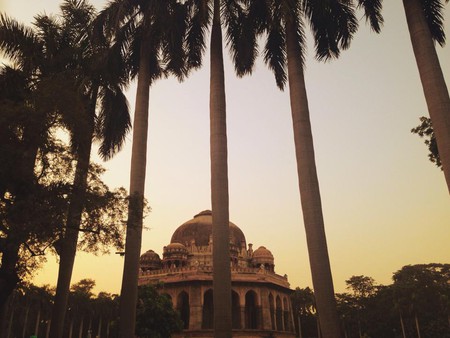 If you are looking for something a bit special that serves impeccable international cuisine, Q’BA is a New Delhi favorite. Whether it be for romantic afternoon cocktails and a light bite on their rooftop bar overlooking Connaught Place or a lavish Mughal dining experience in the restaurant’s interior, Q’BA is perfect for any occasion – and despite being one of the pricier restaurants in the city, the bill is still very reasonable. 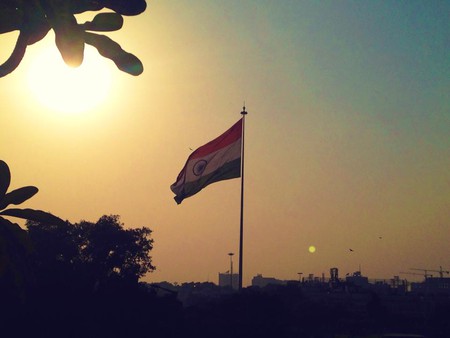 Spoil your taste buds with the fragrant spices and fresh foods Delhi’s biggest bazaar has to offer. Be sure to try the kebabs, stuffed paratha, Gulab Jamun dessert, fresh mango lassi and chai. Food is not the only thing you can buy here; saris, jewelry, leather goods and electronics are all on offer too. If you’re in Delhi during the big Islamic holiday eid ul adha, Chandni Chowk will be lined with goats to sell for the sacrifices to take place at the end of the holiday. An unusual sight for sure. 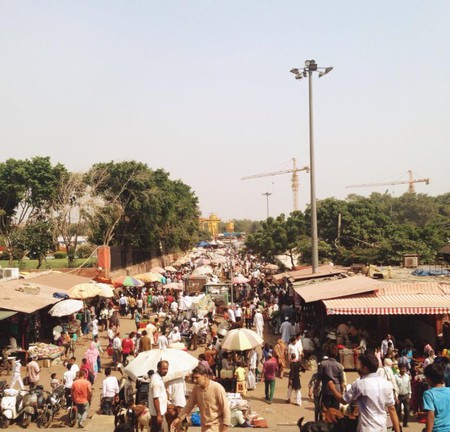 Use the metro. It is not dangerous and surprisingly efficient.

Where the metro is not available, hail a tuk-tuk. Know your prices though; a journey from one sight to another in the city is rarely more than 200 rupees.

Keep knees and shoulders covered. Delhi is quite traditional when it comes to dress, and you don’t want to stand out like a sore thumb!

Whisky! A shot before and after every meal will kill bacteria that is ready to cause the dreaded Delhi-belly!

Don’t avoid street food; it is most likely fresher than most quiet restaurants, cooked in front of you and some of the most authentic and tasty Indian food on offer! 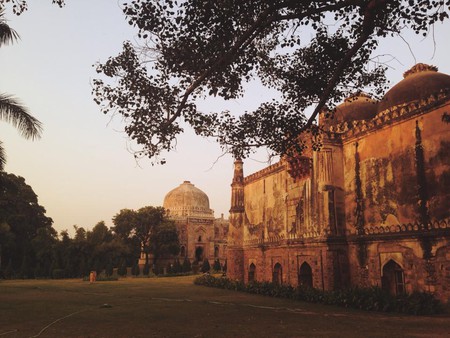 Courtesy of Sophie Izzet
Give us feedback