The Wondrous Spanish Mosque of Hyderabad

Hyderabad has long been an eclectic mix of people and cultures from Central Asia, Iran, Arabia, and North Africa. This extends to food, architecture, living customs, language, and, of course, the warmth and laid-back quality that is typically Hyderabadi. However, there are great treasures waiting to be unearthed in many corners of the city. The Spanish Mosque is one of them. 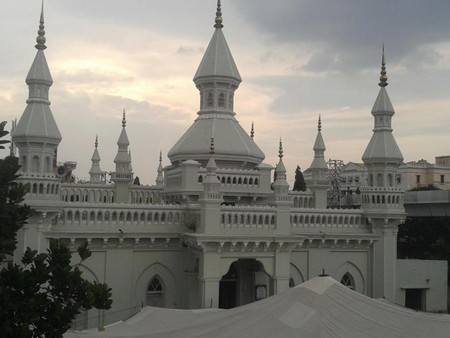 Begumpet Road branches into an outlier, incongruent with the bustle of traffic. A sign proclaiming ‘Jam-e-Masjid, Iqbal-ud-Daula Begumpet Palace’ in a curved arch tipped with a crescent and a star leads to a single-story structure painted in the color of green frost.

Popularly known as the ‘Spanish Mosque,’ the building is believed to have been constructed under the orders of Vikar-ul-Umra, Iqbal ud Dowla in 1906. Under the rule of Nizam Mir Mahbub Ali Khan Bahadur, who ruled from 1869-1911, the Executive Council of five ministers – among whom were Salar Jung, Shams-ul-Umra (1846-1849), Asman Jah, Khurshed Jah, and Vikar-ul-Umra Iqbal ud Dowla (1894-1900) – formed the forefront of administration. These ministers formed the next tier in the hierarchy as Paigah nobles, linked to the Nizam’s family through marriage and recipients of titles such as Shams-ul-Umra and Vikar-ul-Umra. Since these titles were hereditary in nature, they repeat over two centuries, sometimes making the individuals’ specific names difficult to place.

The mosque authorities have erected a shamiyana (cloth tent) in front of the mosque, covering the pathway to the entrance. The main prayer room is flanked by two side rooms that are connected through French windows. On a good day, this mosque can host around 2000 people. There is, surprisingly, no area for ablutions; it is, instead, replaced by a brick drinking water stall. 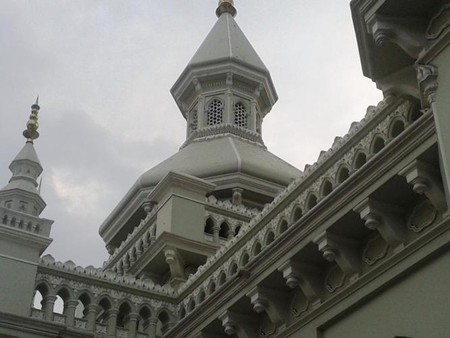 Legend ties this mosque to the ‘Moorish’ style, derived from the Iberian peninsula, based on the examples of hybrid architecture that dot historical Spain: Roman engineering, basilical halls, and aspects of ‘Islamic’ architecture such as minarets, qibla walls, mihrab, and maqsuras.

It is believed that Iqbal ud Dowla, on a foreign tour of Europe, came across certain monuments that entranced him, or that he had carried photographs of sites that he wished to re-invent in his homeland. It is apparent that the elements are starkly different in comparison to other mosques in Hyderabad. Located close to James Street, the principal commercial and general business thoroughfare of Secunderabad, this area must have been a lively center of activity.

It is also believed that this mosque was part of the grand estate of the Paigah noble, which included seven palaces spread over 1600 acres: the Paigah Palace, Aiwan-e-Vicar, which consists of the Mardana Palace (presently the US Consulate!) and the Zenana Palace (which are now converted into malls, function halls, clubs and tourist sites), and the more popular Falaknuma Palace, some distance away. 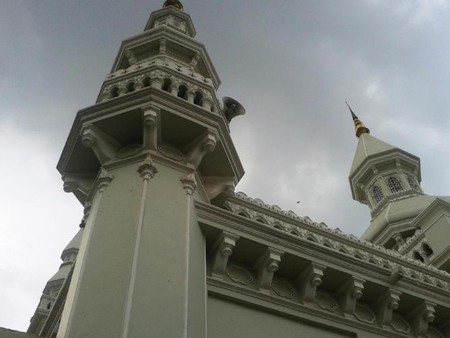 The striking minarets and the unusual architecture | © Aprameya Manthena

Despite stories of the Spanish Mosque being based on the Great Mosque at Cordoba, even a cursory look at the two structures does not suggest imitation. The present proprietor, Faiz Khan – who is also a descendant of the family – links the different elements of this mosque to Seljuk, northwest African Islamic apart from Hispanic- Islamic architecture borrowing also from Anatolia and Turkey.

The slender proportions of the minarets, narrowing to brass finials interrupted by cylindrical shafts, highlight the most remarkable aspect: the octagonal spires, the central one topped by a crescent. The mosque is not topped by a bulbous/onion-shaped dome, which has come to become a symbolic marker of an ‘Islamic’ construction. The building is entered through a porch, capped by eaves supported by brackets. The mihrab does not contain the lamp/symbol of Light, nor is it made in the image of the façade. It is three-faceted and contains minimal geometric patterns or Arabic inscriptions.

The inner sanctuary is entered through French windows topped by oval pointed arches, framed by five bays, in the style of the Cordoba mosque. It recently won the INTACH Heritage Award for Unusual Architectural Style. While the general program of the mosque with respect to the placing of minarets, balconies, columns, and roof terraces follows Deccani influences, the Begumpet Spanish Mosque stands in a league of its own.
Directions:

Train: Take the local MMTS to the Begumpet station. Once there, take an auto to Prakasham Nagar where the mosque is located. The fare could be anywhere in the range of Rs. 50-70

Bus: No matter where you take the bus from, get off at Begumpet, Prakasham Nagar. Secunderabad/Rathifile bus stop is a convenient link to Begumpet area.