The 10 Indian Fashion Designers You Should Know

From legendary pioneers like Ritu Kumar, a veteran of Indian fashion since 1969, to emerging talents like Kanika Goyal and Priyanka Ella Lorena Lama, India produces enormously talented designers that effortlessly blend respect for age-old traditions with forward-thinking aesthetics. Here are ten names you should know in Indian fashion.

A 2009 graduate of Mumbai’s SNDT Women’s University, where she studied Apparel Manufacture and Design, Masaba Gupta launched her self-titled label Masaba that same year, debuting as part of Lakme Fashion Week’s Gen Next show for up-an-coming designers. Her signature style – a combination of traditional Indian aesthetics and modern flair typified by lightweight fabrics brightened by vibrant, quirky prints – was an instant hit and her designs have been worn by Bollywood stars Bipasha Basu and Shilpa Shetty. Since her debut, Gupta has won awards including the 2012 L’Oreal Paris Femina Award for Best Emerging Designer and PETA India’s Most Talented Designer of 2013.

You might like:Lakmé fashion week showcases the future of Indian fashion

Born and raised in Rourkela, Bibhu Mohapatra later moved to the USA to study economics, though his love of fashion led him to New York City where he studied at the prestigious Fashion Institute of Technology and won the 1997 Critics’ Award for Best Evening Wear Designer of the Year. After working with high profile brands including Halston and J. Mendel, Mohapatra set out on his own to launch his eponymous label in 2008 and has gained a name for himself with exquisite evening dresses that flow and flatter the female form. Most recently, his designs have been seen on America’s First Lady Michelle Obama.

London-born and Mumbai-raised Manish Malhotra got his first foray into the world of fashion as a model, before becoming a Bollywood costume designer in 1990. He has since become one of the most recognizable names in Indian fashion. Over the course of his illustrious career, Malhotra has styled over 1000 films and is credited with redefining and modernizing Bollywood costume design, while his high couture label (launched in 1998) earned him a place in mainstream fashion. Known for his luxurious, contemporary style that fuses traditional Indian colors, fabrics and embroidery, Malhotra is credited with helping bring Indian fashion cultures to the international stage.

Launched in 1969, Ritu Kumar’s label has grown from a tiny studio on the outskirts of Kolkata to one of India’s biggest brands with 27 stores dotted across the country. Through her use of fine Indian fabrics and the country’s most talented craftspeople, Kumar has sought to redefine age-old Indian traditions in the contemporary era, creating a style that is both rich in Indian aesthetics and modern sophistication. A true pioneer in Indian fashion, Kumar has been recognized with prestigious awards including France’s Chevalier des Arts et des Lettres and India’s Padmi Shri Award for her contributions to fashion, textiles and craftsmanship. 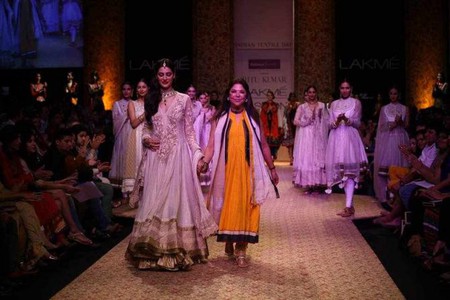 As the daughter of award-winning Dinesh Singhal and granddaughter of renowned Indian artist J.P. Singhal, it is perhaps not surprising that Payal Singhal would become a creative soul and first foray into fashion – she was awarded the Shoppers Stop Designer of the Year Award at the tender age of 15 – established her prodigious talent. Today, Singhal’s self-titled label – which she launched in 1999 and produces custom made-to-order designs alongside ready-to-wear bridal, contemporary and occasion design – is synonymous with confident, cultured South Asian style and boasts a flagship store in Mumbai and retail outlets in Hong Kong, the Middle East, India and the USA.

Since launching his eponymous label in 1997, New Delhi-based designer Manish Arora has become the darling of the international fashion world. His label officially debuted at the 2005 London Fashion Week to rave reviews and two years later his successful show at Paris Fashion Week saw Arora invited to the distinguished French Federation of Pret-a-Porter. Known for his detailed craftsmanship and unique color palette, Arora’s designs fuse Indian heritage with a playful, contemporary vibe and have been featured in high profile fashion magazines such as Vogue and Harper’s Bazaar and his eye-catching, colorful creations have been sported by stars including Lady Gaga and Katy Perry.

Born in 1991, Bangalore-based Priyanka Ella Lorena Lama is one of India’s most talented, up-and-coming young fashion designers and launched her debut pret-a-porter collection under her label, P.E.L.L.A., at the recent Lakme Fashion Week Gen Next Summer/Resort 2015 show. A graduate of Apparel and Fashion Design at Bangalore’s National Institute of Fashion Technology, Lama’s designs are deeply rooted in the Japanese Wabi-Sabi school thought which promotes the idea that there is beauty in imperfection – evident in her debut collection UTOPIA which focuses on natural fabrics like silk, natural silhouettes and hand-crafted aesthetics.

From the establishment of Ensemble, India’s first multi designer boutique, in 1987 to the founding of his own studio in 1990 and becoming the first Indian fashion designer to showcase his works at Milan Fashion Week, Tarun Tahiliani has made many contributions to Indian fashion over his career. His signature style borrows elements of Italian pattern cutting and Indian craftsmanship mixed with modern technologies like digital textile printing, culminating in a look that is both faithful to opulent Indian aesthetics yet contemporary, chic and international. Some of Tahiliani’s most famous designs include British heiress Jemima Goldsmith’s bridal gown for her wedding to Pakistani cricketer Imran Khan in 1995. 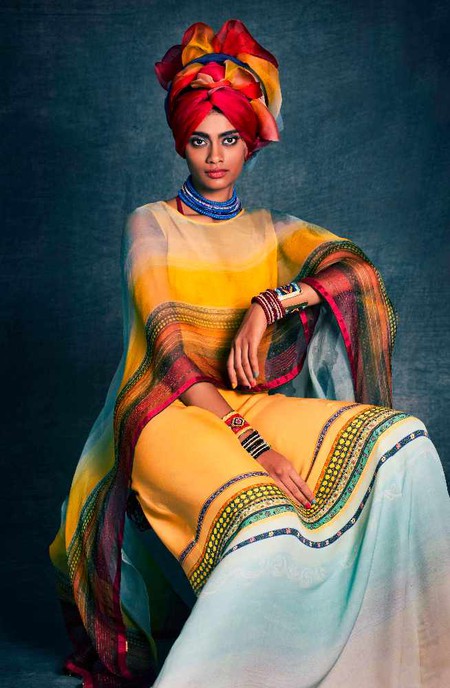 A graduate of both New Delhi’s National Institute of Fashion Technology and New York’s Parsons School of Design, Kanika Goyal cut her teeth in the fashion world working for high end brands including Marchesa, Bibhu Mohapatra and Prada, before establishing her own label in 2014. Described as ‘provocative minimalism’, Goyal’s menswear and womenswear are guided by a mix of classic luxury and urban chic fused with paradoxical textiles and shapes. Hotly tipped as one of India’s best up-an-coming designers, Goyal made her Lakme Fashion Week debut as a Next Gen designer this year with her Summer Resort 2015 collection, ‘Creatures of the Night’.

Kolkata-based designer Sabyasachi Mukherjee founded his label following his graduation from New Delhi’s National Institute of Fashion Technology in 1999 and in just a few short years was making waves in the fashion world, winning the 2001 Femina British Council award for Most Outstanding Young Designer in India and being named Grand Winner at the Mercedes Benz Asia Fashion Week in 2003. Described by Mukherjee as “international styling with an Indian soul,” his designs are characterized by a fusion of styles, patch-worked embellishments and vibrant color palettes and have been seen on Bollywood stars in films like Raavan and Guzaarish.