Tattooed Tribes: Art, Tradition, And The Body As Canvas 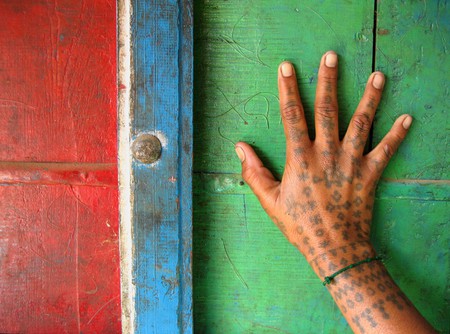 While some people carry very negative opinions of tattoos, the artistry has become very commonplace in practically all countries and cultures. But what is now a fashion statement first emerged as a means of branding.

For hundreds of years, the tradition of tattooing to segregate groups was common across the length and breadth of the country. Even today, tattoos on the forearms of many different communities are traditional (particularly in Maharashtra and Gujarat, where one can easily find the peculiar green ink tattoo). As diverse as the cultures are here, so are the customs and kinds of tattoos which every community or tribe use to mark themselves with.

There are no concrete records known to the public, which talk about the very beginning of this concept. The English word ‘tattoo’ was of course an unknown thing. It is called ‘godna’ (burying the needle/tattooing) in Hindi, the word taken from the gesture that is performed while making a tattoo. What we consider as a way to express ourselves by inking our bodies, was and is still used to mark tribes and even to cause disfiguration. Young girls of tender age are often made to get tattoos. In certain tribes of Arunuchal Pradesh, for instance, faces of young girls were tattooed so that they appeared unappealing. 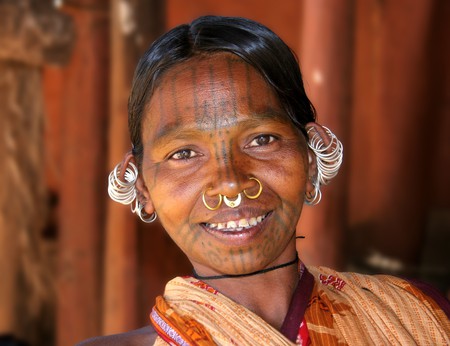 A Tribal Woman In India With Tattoos On Her Face | © PICQ, background blur by Samsara/WikiCommons

If you go to the tribal villages of the Ziro valley, you might still find some old women from the Apatani tribe with their faces tattooed (though the Apatani are more famous for their nose plugs, another indigenous way to ensure that rival tribes would not steal the women).

While the Indian government had put a ban to this in the 1970s (which is the reason young women with tattoos on their faces aren’t seen in urban areas anymore), the practice lives on in the interiors, and in as yet untouched parts of the country. The Dhanuks, who are from Bihar, also resorted to this practice to ensure that their women were safe from upper caste men and men of other tribes. 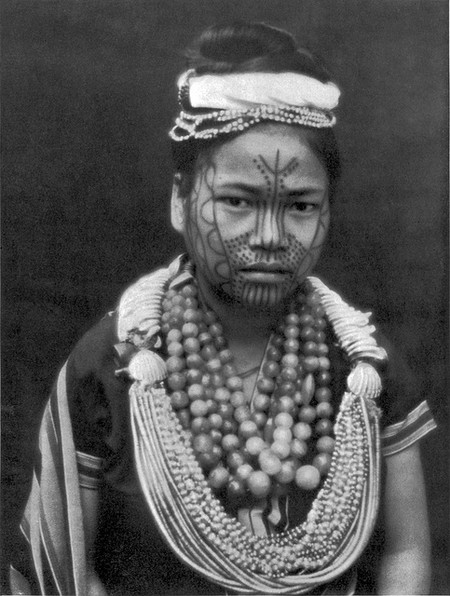 Another tribe in north east India, the Singpho tribe has distinct rules for men and women. Unmarried women are not allowed to get a tattoo. Once married, the woman gets both her legs tattooed from the knee to the ankle and men do the same with their hands. People of the Singpho tribe can be found in both Arunachal Pradesh and Assam.

It is apparently believed that if the woman has tattoos in the body parts which are visible to others, she is from a lower caste. In south India, especially Tamil Nadu, the concept of getting permanent tattoos, also known as pachakutharathu, was very common. 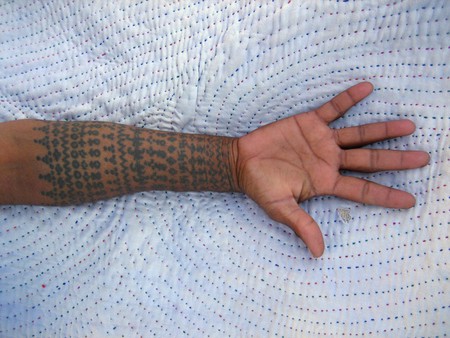 In the very beginning, it is believed that tattoos were mere cuts on the skin and that the idea was to inflict physical pain. With evolution came the idea of using plants that caused the emergence of color on the skin. The idea of inflicting pain on oneself stemmed from religious beliefs, it is guessed. Later, it came to be the means to differentiate between castes and tribes.

Legend has it that there used to be a community called the Ramnaamis who, though lower class, decided to break barriers and adopt the practices of brahmins. This community existed in Bihar and Madhya Pradesh. What happened next was that the brahmins were enraged, and to save themselves from any onslaught, the Ramnaamis tattooed the name of Lord Ram on themselves. The community still does this, even today.

Adivasi Tribe ® Wikipedia
Give us feedback