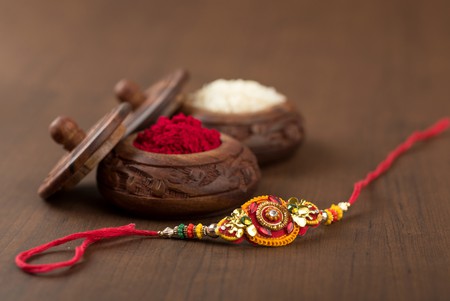 Sibling love is celebrated in the Hindu festival of Rakhsha Bandhan. It is widely observed in countries such as India, Nepal and Mauritius.

During the festivities, which take place annually in August, women tie a sacred thread called rakhi on their brothers’ wrists as a symbol of love. The latter then presents them with a token gift promising protection for life. In Sanskrit, the word raksha means ‘protection’ and bandhan means ‘to tie’.

Before the festival, local markets in India come alive with dazzling decorations in anticipation of the event. Women are seen flocking to markets looking for the perfect rakhi for their brothers, while men are found searching for just the right gift. The occasion is not only celebrated between biological offsprings, but also among those who share a close filial relationship. 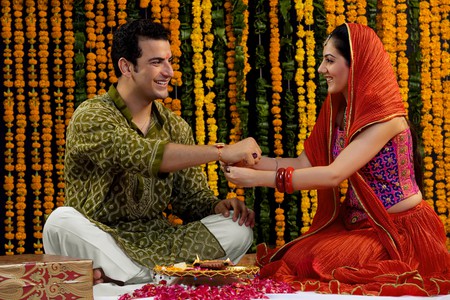 How is Rakhsha Bandhan celebrated?

The ceremony begins with the lighting of a diya (oil lamp), which signifies the fire deity. The sister performs the aarti (prayer offering with light), invoking the gods to shower prosperity on her sibling. She then applies a tilak, which is a paste made of sandalwood or vermilion, on his forehead and ties the rakhi on his wrist. Following the rituals, the brother presents her with a gift – most commonly, money or jewellery – to express his love and commitment.

Different states in India commemorate the occasion in different ways. In Jammu and Kashmir, a month-long kite festival is held before Rakhsha Bandhan. In Maharashtra, a coconut festival, or Narali Poornima, is observed alongside Rakhsha Bandhan. On this day, fishermen throw coconuts into the sea as an offering to the sea god, Lord Varuna. The states of West Bengal and Odisha call this day Jhula Purnima and offer prayers to Lord Krishna and his consort Radha. Besides brothers and sisters, the entire community in this region comes together in a mutual feeling of kinship. 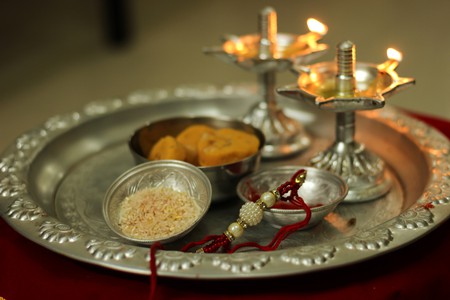 Similar to most India festivals, the origin of Rakhsha Bandhan is shrouded in legends with the most famous being the one associated with Lord Krishna and Draupadi, the female protagonist of the epic Mahabharata. According to the myth, Lord Krishna once cut his little finger when holding a sugarcane. Seeing this, Draupadi tore off a piece of her own saree and bandaged his finger. In return, Krishna vowed to come to her aid whenever she needed him. Thus, the rakhi thread is said to symbolise Draupadi’s saree.

Another historic legend believes that Alexander the Great’s wife Roxana sent a sacred thread to King Puru or Porus when her husband invaded India in 326 BC. She implored him not to harm Alexander when they fought each other. It is said that during the heat of the battle at Hydaspes, Porus restrained himself from killing Alexander when his eyes fell on the rakhi on his wrist from Roxana.

When is Rakhsha Bandhan this year?