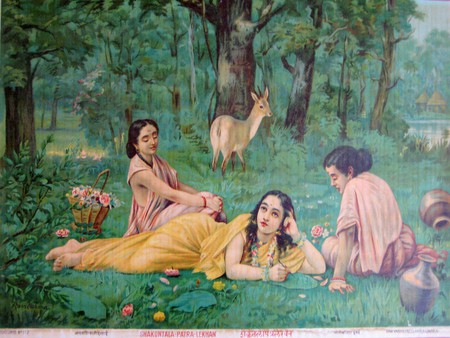 How we see Indian Goddess Saraswati today, with a peacock by her side or an elephant with a garland at its trunk – in reverence to a splendid Lakshmi who’s risen on a lotus with poise – is thanks to Realist painter, Raja Ravi Varma. Culture Trip discovers the man who created Indian calendar art.

Born in 1848 in the village of Kilimanoor, Kerala, Ravi Varma belonged to royal lineage. Lore has it that he was spotted drawing pictures on the walls of his house by his uncle. The uncle brought him to the royal palace of Thiruvananthapuram where the young Ravi Varma was instructed in art. The palace exposed him to the various Indian and Western styles of the times. 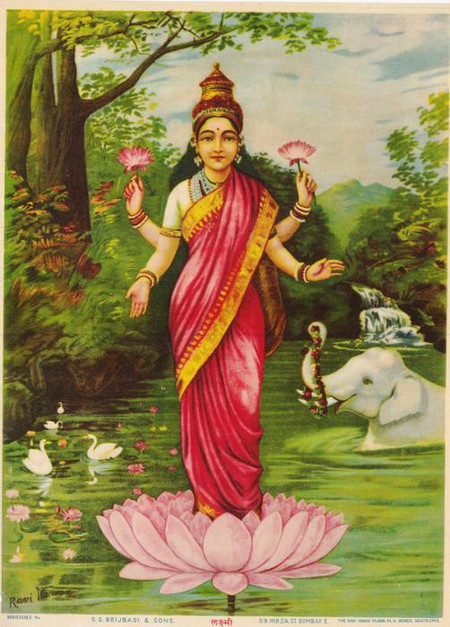 Nineteenth-century India was popular in the West for its miniature paintings. These were majorly Mughal and Rajput paintings – the former documenting their reign while the latter celebrated Hindu deities, done usually on cloth with colours made from minerals and ink. Other forms were majorly regional – Pattachitra – a cloth-based scroll painting in Orissa, Madhubani art from Bihar, or the Thanjavur painting originating in Tanjore. While they all varied in form, a thread of commonality weaved them – the flat rendition of the figures.

Oil as a medium was just being introduced, and not many who knew the technique. Ravi Varma taught himself the medium by observing a Dutch painter, Theodor Janson, who was on a visit to the court. He grew to be the celebrated Raja Ravi Varma, feted as the father of modern Indian art for primarily two reasons. The first was that he was the first one to fuse European academic techniques with Indian sensibilities. 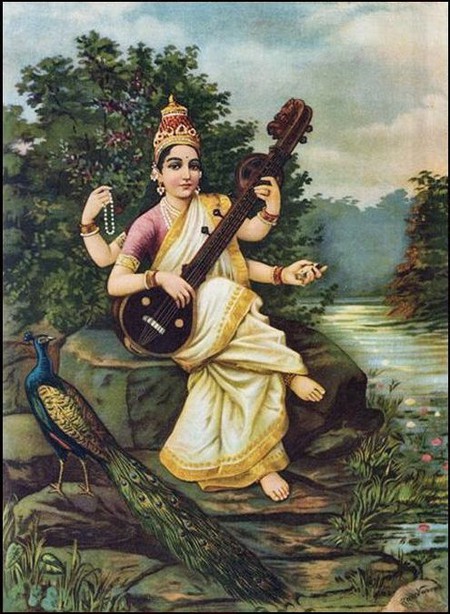 Adopting realism, Ravi Varma focused much on the details, the play of light and shadows, adding depth by using perspective in his paintings. Suddenly the folds of a sari fluttered, the hair coiled, and the eyes expressed a longing. With thicker strokes, the jewels that generously adorned his subjects shimmered in a perceived angle of light. His paintings are an abundance of life – trees heavy with fruits and flowers, waters resplendent with its many hues, and the subjects almost waiting to blink their eyes and continue their motion. This was a remarkable shift from the type of art that was painted then.

Ravi Varma’s expeditions through the country spread across an ever-changing topography is reflected in his large body of work. Not many travelled at that age, though his quest also got a fillip with the railways that were being laid down in the country at that time. Always by his side was his younger brother Raja Raja Varma, a fine painter in his own right, who assisted Ravi Varma in his art and managed his businesses. Rupika Chawla, who authored Raja Ravi Varma: Painter of Colonial India,points out that Ravi Varma was conscious about his clientele – the princes and the dewans he portrayed – an ambitious mix that made him one of the most sought-after artists. Besides being one of the finest Indian artists to do portraits, Ravi Varma made his niche with the pauranic paintings that have made him so popular.

Often reckoned as the father of Indian calendar art, Raja Ravi Varma very exquisitely breathed life into the Hindu mythical characters. Up until then, most of these characters that were painted were flat, and the deities were recognized only by their own accessories. Owing to modern realism, Raja Ravi Varma offered them a face with which to be identified. And many a lovely episode from the intriguing Hindu epics came to life, in full bodied form – colour and emotion that were palpable.

Jatayu, in a bid to save Sita from Ravana, is a grand expression, as is Shakuntala’s longing stance with her head turned in the glance that narrates her legend with Dushyant. A very doting Arjuna coaxing Subhadra, or Menaka in a bid to distract Vishwamitra are stories captured in a frame. 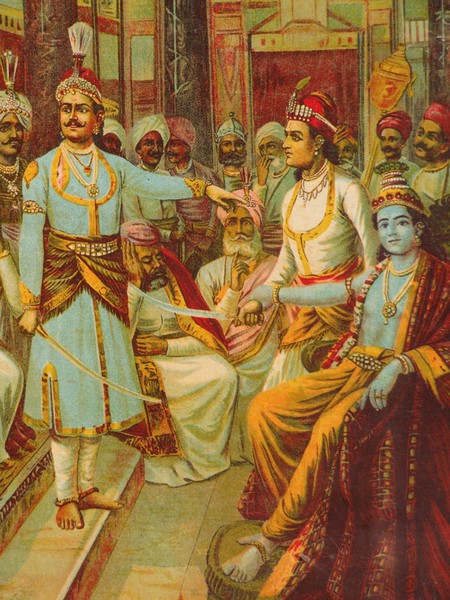 The second reason that made the painter so remarkable was his vision – he founded a printing press in Mumbai in 1894 with the help of a German expert Fritz Schleicher that churned out inexpensive oleographs of his paintings. Suddenly, the bazaars were inundated with posters of a plethora of deities. God descended from the temple stone and made itself comfortable in small homes in dingy gullies. If his gorgeous portraits made him a blue-eyed artist for his crowned patrons, his cheap prints made him a commoner’s painter.

His oeuvre of pauranic paintings was instrumental in constructing a national consciousness. It was also at a time in India’s chronology when national sensibilities were taking root. His Veda-reflective art gelled with the momentum, gaining popularity and at the same time feeding the consciousness. This is perhaps one reason why his equally talented brother Raja Raja Varma, a landscape artist, couldn’t muster the recognition his brother did. Painter A. Ramachandran, who was the force behind a grand exhibition in 1993 that revived the idea of Raja Ravi Varma as the father of modern Indian art, fell upon a copy of Raja Raja Varma’s pleasingly written diary. Rupika Chawla explains how in one of the excerpts, Raja Raja Varma writes: ‘Today I painted the pillar in Hansa Damayanti,’ while Ravi Varma painted Damayanti.

It’s interesting to note how Indian cinema was seeded in Raja Ravi Varma’s story, of course owing to global technological advancement. A young photographer, Dhundiraj Govind Phalke, joined Ravi Varma at his press, excelling in lithographs and oleographs. A little later he set up his own press before eventually reeling India’s first moving picture – Raja Harishchandra in 1912. Raja Ravi Varma passed away in 1906. 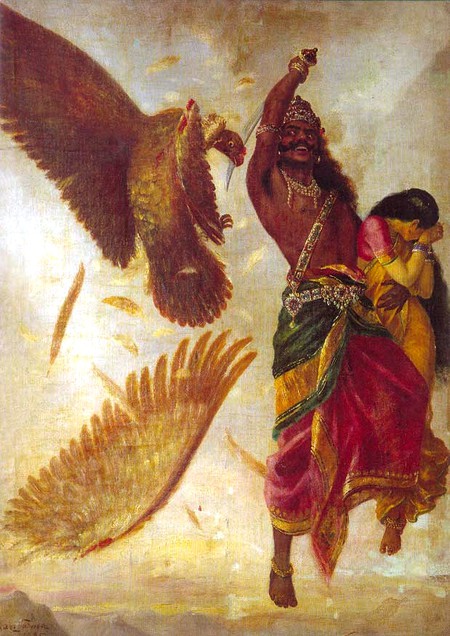 For decades after his death, his prints continued to adorn the walls of middle-class homes; however, soon after, other schools of art came forth. The Bengal School of art, as part of the nationalist movement, reacted sharply against Raja Ravi Varma’s European academic style of painting. Along the same line, a few art historians condemned his work for the reasons that otherwise made him so noteworthy – mixing Western academic techniques with Indian subjects. 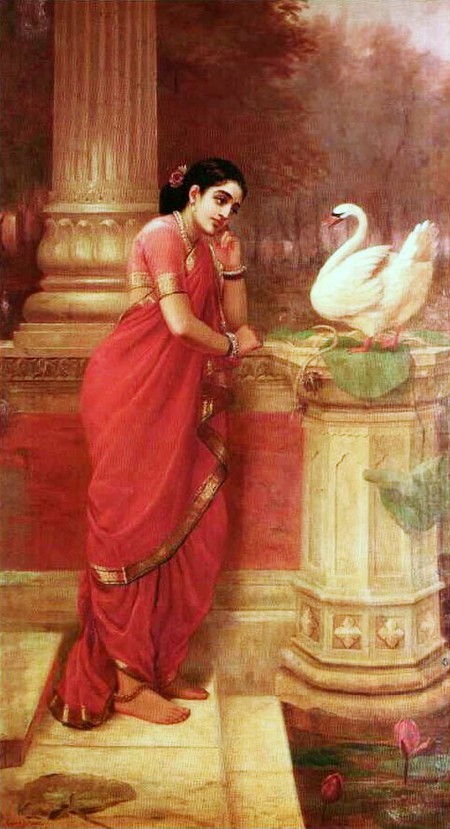 Nonetheless, in his heyday, the globally known, much awarded artist set the visual language for India. From match-box labels, tin sweets boxes, religious and political posters, mythological series, calendar art to early Indian cinematic aesthetics, his influence continues to linger. Many even laud him as the father of Indian advertising, and the pop culture of the day love to idolize him as the father of Indian kitsch.