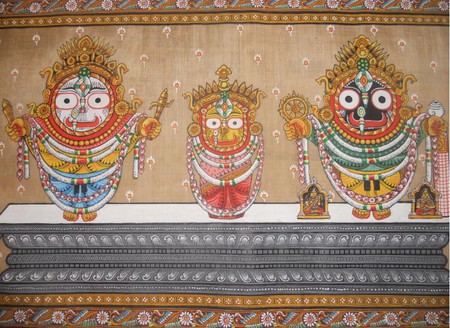 Pattachitra of the dieties of Puri Jagannath Temple © WikiCommons

Pattachitra evolved from Sanskrit. When broken down into its two parts, Patta means cloth, and Chitra means picture. Hence, Pattachitra is a picture painted on a piece of cloth. This form of art is closely related to the cult of Shri Jagannath and the temple traditions in Puri. Believed to have originated as early as the 12th century, it is one of the most popular living art forms, and people in Odisha practice it to this day.

Almost all of the Chitrakar community hails from a small village in Puri district called Raghurajpur. This is also the only village in India where each family is engaged in crafts, such as patta painting, wooden toys, stone carvings, etc. For Pattachitra painting, the Chitrakars follow a traditional process of preparing the canvas. A gauze-like fine cotton cloth is coated with white stone powder and gum made out of tamarind seeds. This makes the canvass ready to accept the paint, made of natural colors. These colors are an unique feature of Pattachitra. The gum of the kaitha tree is the chief ingredient, used as a base for making different pigments by adding available raw materials. For instance, to get the shade of white, powdered conch shells are used. 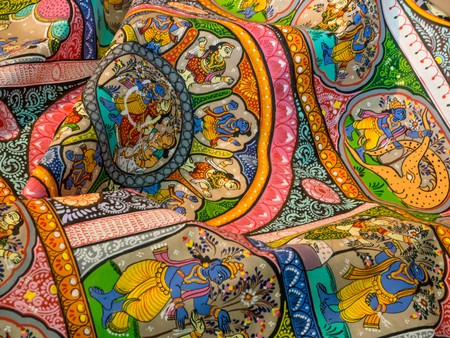 Pattachitra is predominantly icon painting. Some of the popular themes of this religious art are The Badhia (a depiction of the temple of Jagannath); Krishna Lila (an enactment of Jagannath as Lord Krishna displaying his powers as a child); Dasabatara Patti (the ten incarnations of Lord Vishnu); and Panchamukhi (a depiction of Lord Ganesh as a five-headed deity). Every year during Debasnana Purnima in Puri Jagannath Temple, the deities are believed to take a bath with 108 pots of cold water to fight the heat of summer. Afterward, the deities supposedly fall sick for a period of 15 days known as ‘Anasara.’ Because of the deities’ absence from public view, some of the finest Chitrakars are gathered to make three Pattachita paintings of the three deities — namely Lord Jagannath, Goddess Subhadra, and Lord Balabhadra — for the public to pay obeisance. These painting are called Anasar Patti.

A depiction of paradis of God Ganesha of Indian Mythology | © WikiCommons

It is a disciplined form of art with a set of rules and restrictions. A floral border is a must around the paintings, and so is the use of natural colors. The paintings are executed primarily in profile with elongated eyes, as well. With the use of such prominent solid shades, the paintings end up depicting stark emotional expressions with great detail. Following completion of a painting, the canvas is held over a charcoal fire and lacquer is applied to the surface.

Over the years the art form has evolved and has experienced discernible changes. The Chitrakars have painted on palm leaves and Tussar silk and have also created wall hangings and showpieces. Because of the stringent methodology of the art, it survives, preserving the effervescence of the aesthetic Pattachitra. The intriguing folk paintings are internationally known, and the setting up of centres to teach the art form in Odisha speaks volumes about its consistency and popularity.